The Millennials: The Politically Unclaimed Generation

They have the potential to become the most socially tolerant, fiscally responsible generation in the nation's history. 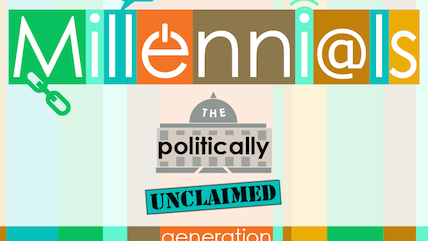 A new Reason-Rupe survey and report of millennials, Americans ages 18-29, find this cohort may be more difficult to politically pigeonhole than previously thought.

Despite record-breaking Democratic presidential voting among 18- to 29-year-olds in the past few elections, millennials are no more Democratic (43 percent) than Americans over 30 (49 percent). Instead, they are three times as likely to say they are independent (34 percent) and half as likely to be Republican (23 percent).

Millennials have little confidence in either of the major political parties, particularly when it comes to privacy, spending, the deficit, and drug policy. In fact, 28 percent of millennials trust "neither" party across all 15 policy issues surveyed.

Nevertheless, the GOP's hardline on divisive social issues has distanced the most socially tolerant generation in history. Two-thirds (67 percent) of millennials favor legalizing same-sex marriage—including a majority (54 percent) of Republican millennials. In addition 57 percent support legalizing marijuana. By comparison, Democrats appear to be the better of two bad options.

Perhaps one reason millennials aren't more Democratic is that they aren't simply liberal, but are social liberals and fiscal centrists. They see themselves as similar to President Barack Obama on social issues, but actually closer to Republican Gov. Chris Christie on economics.

These results indicate that social issues largely define millennials' political judgments. Indeed, when we asked liberal millennials to describe why they are liberal, only a third mentioned economics. Instead, two-thirds said social tolerance is central to their political identities.

Millennials don't conform to traditional political stereotypes. This generation is pro-business and pro-government. They are free marketeers and a majority (55 percent) say they would like to start their own business one day. They believe in self-determination and that hard work pays off (58 percent). They like profit (64 percent) and competition (70 percent) and strongly prefer a free market economy over one managed by the government (64 percent to 32 percent). Moreover, when asked to choose,millennials opt for meritocracy (57 percent) over a society with little income equality (40 percent).

At the same time, millennials came of a politically impressionable age during or in the wake of the Great Recession. And the ensuing sluggish economy has left a third of millennials under- or unemployed and a third living at home with their parents. As corporate profits soar and millennials' job prospects remain uncertain, they aren't sure if free markets (37 percent) or government services (36 percent) better drive income mobility.

This uncertainty over what promotes opportunity has likely bolstered their support for increased government action. A plurality (48 percent) say there is more government should be doing, while older Americans want government to do less. Millennials favor increased social spending (58 percent), and guaranteeing housing (74 percent), income (68 percent), health insurance (69 percent), and even college (54 percent) to society's least advantaged.

Nevertheless, millennials recognize government comes with its own problems. Two-thirds (66 percent) think government is inefficient and wasteful (up from 42 percent in 2009). They also see the potential for regulatory capture, 63 percent say regulators favor special interests over the public when writing and enforcing regulations. Moreover, 58 percent say government agencies generally abuse their power.

The survey also finds support for activist government declines as millennials make more money and become responsible for paying for things. Here are a few examples:

While millennials have ambivalent economics views, it is clear they don't like to be nannied. They opt for personal choice over government regulation across a number of activities and products governments have banned or have sought to ban.

Six in 10 millennials favor legalizing online gambling and favor allowing people to use e-cigarettes in public places, view adult pornography online, and eat trans fats. Two-thirds also think people should be allowed to buy traditional incandescent light bulbs and grocery stores ought to be allowed to offer plastic bags at checkout. Despite New York City's effort to ban the sale of large sugary drinks in restaurants and theaters, three-fourths of millennials say people should be allowed to buy them.

In sum, millennials' unique combination of values and beliefs is the reason this generation remains politically unclaimed. Their attitudes also signal the potential for them to become the most socially tolerant, fiscally responsible generation in the nation's history. They value individual autonomy and see themselves as socially liberal but not economically liberal. While there is little reason to expect them to become less supportive of gay rights as they age, we already observe them becoming more fiscally conservative as they age, make more money, and take on more responsibilities. Moreover, they endorse the values of hard work, self-determination, and competition that underpin free market capitalism.

Young Republicans are already exhibiting a shift toward social liberalism while remaining fiscally conservative, demonstrating a libertarian trend on the right. Young Democrats are highly supportive of a potential candidate who is both socially liberal and fiscally conservative, also signaling openness to non-traditional candidates on the left. Overall, these trends suggest that millennials are up for grabs and that both political parties, particularly Republicans, will need to move toward greater fiscal responsibility and social tolerance to remain competitive among this cohort.