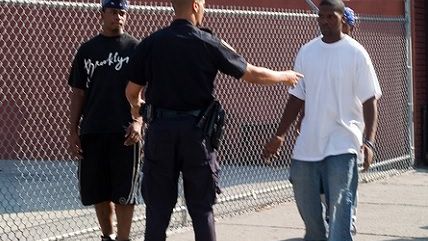 Police in New York City are still stopping people and compelling them to empty their pockets, then slapping them with a misdemeanor charge of criminal possession in the fifth degree—public display, a controversial and illegal practice meant as an end run around decriminalization laws on the books in New York for more than 30 years. In 2012, Democratic Gov. Andrew Cuomo called for such public display of marijuana to be decriminalized too, a plan abandoned earlier this year. A local congressman, Democrat Hakeem Jeffries, tells The Huffington Post he thinks Cuomo dropped the decriminalization effort because New York's new mayor, Democrat Bill de Blasio, had promised to curb such (illegal!) arrests. Instead:

Data released earlier this month from the New York state Division of Criminal Justice Services shows that from January to March, more than 7,000 individuals were arrested in New York City for possessing small amounts of marijuana, and 86 percent of them were black or Latino. That number of arrests, Jeffries said, puts New York City on track to have just as many low-level marijuana arrests in 2014 as it did in 2013, when nearly 29,000 New Yorkers were busted for low-level marijuana possession.

In 2012, Commissioner Ray Kelly told cops in New York City to stop making such arrests. Bill de Blasio's pick, Bill Bratton, says he's against decriminalization (the law of the land for small amounts, except for public view) and defends low-level arrests as a crime-fighting measure. It's called the broken windows theory, and Bratton employed it when he served as police commissioner for Republican Rudolph Giuliani in the '90s; the idea was that going after "petty" criminals—like vandals and fare skippers—would cut down on more serious crimes too. Whether or not the theory holds, it hardly applies to getting someone to show you something that becomes a crime to possess only because you've shown it. It dismisses constitutional rights in a way that's not necessary for fighting crime or doing anything other than terrorizing select populations because you think they commit crimes. Will de Blasio get a pass because he was something Bloomberg never was—a Democrat?