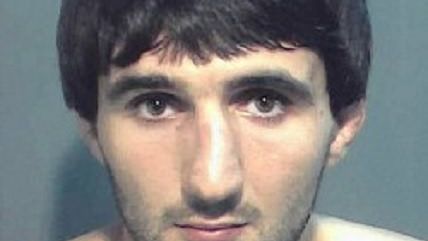 Ibragim Todashev, a friend of Tamelan Tsarnaev, the suspected Boston bomber who was killed in a shoot-out with cops, was shot to death by an FBI agent in his Orlando, Florida, home after agreeing to be interviewed by them. Todashev was also suspected of a 2011 triple homicide in Boston that cops may have written off as drug related, and the FBI says he admitted to it before their agent killed him.

The FBI determined the shooting of Todashev in his apartment during questioning was justified, keeping the agency's two-decade long streak of justified shootings (about 150 since 1993) intact.

Neither the FBI nor officials in Massachusetts (two state troopers were with the FBI agent during the shooting) and Florida would release the name of the FBI agent, but the Boston Globe discovered his identity, and a troubling past in law enforcement. The Globe reports:

The Globe obtained their names by removing improperly created redactions from an electronic copy of Florida prosecutor Jeffrey L. Ashton's report — which in March found the shooting of Todashev justified — and then verifying their identities through interviews and multiple government records. Those records include voting, birth, and pension documents.

That research identifies the FBI agent as Aaron McFarlane, 41.

McFarlane's full name and birth date on records in Massachusetts and New Hampshire match that of the Oakland police officer who was involved in several controversies during his four years with that police force. He retired with a pension of more than $52,000 annually for the rest of his life.

In California, lawyers who had sued McFarlane in Oakland were stunned that the FBI later hired him.

"I would be shocked to learn that the Aaron McFarlane we sued a decade ago could have gone on to have a career with the FBI," said Ian Kelley, a San Francisco lawyer who sued McFarlane on behalf of a man, Michael Cole, who accused McFarlane and another officer of beating him.

The Globe reports that while in Oakland, McFarlane was the target of two police brutality lawsuits (costing Oakland at least $32,500 in settlements), four internal affairs investigations, and once plead the Fifth during a police corruption trial in which prosecutors accused him of falsifying police reports. All this, mind you, in four years. McFarlane went on to collect a $52,000 a year pension after "retiring" ten years ago at 31.

He was hired by the FBI five years ago, but continues to collect a pension, which he is promised for life. McFarlane was employed with the Oakland Police Department while it was embroiled in the largest corruption scandal in its history, one which cost the city $10 million and for which the department is still under federal oversight. He is the son of a former police officer.

When Oakland pays their police officers a higher pension than the median household income in the U.S., it shouldn't be surprising they're in a fiscal mess. Occupy Oakland has spent the last few years instead blaming capitalism for the city's problems.