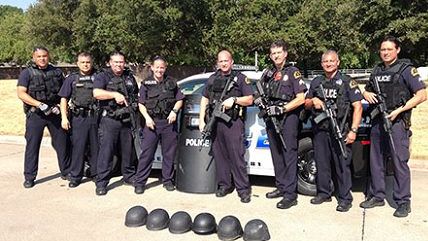 The Dallas Police Department (DPD) is warning its officers about encountering citizens recording them while on duty, according to CBS Dallas-Fort Worth, which also reports:

Dallas Police Association President Ron Pinkston wants citizens to stop taping because he worries someone will get hurt. "It's creating a major officer safety issue," he said. "We don't know who it is pulling behind us. We don't know they're there to videotape, they might be part of…if that guy has has just done a kidnapping they could be part of the kidnapping. You don't know."

The warning from the DPD referenced one officer's encounter with a woman, affiliated with Cop Block, who followed him with a video camera and—gasp—refused to give him information. What information did the cop need? He ought to be at least as well versed as she is in whether recording police officers in public is legal. It is, and to the DPD's credit their warning did include the reminder that residents have that right.

The Dallas Police Association, meanwhile, insists that dashboard cameras and planned body cameras are sufficient monitoring for cops and, according to the CBS affiliate, "are asking citizens to put their cameras away."

Citizens, who may be aware of police not interested in being monitored, should consider asking the union to fuck off.

Related: While the police union in Dallas appears to be trying to demonize Cop Block, an alt-weekly in Cleveland appeared to try to do the same for different reasons.

UPDATE: Lt. Max Geron responded to a tweet of this article by Radley Balko that the DPD "respects the rights of citizens to record in public and encourages them to do so safely." In another tweet, he highlighted that "the statements against citizens recording police are those of union bosses & NOT from the Dallas Police Department". That distinction was made in this post, although without the exact term "union bosses."