Brian Doherty | From the February 2014 issue 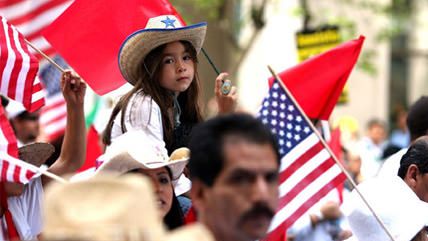 Since the 1960s, the United States has seen a surge in immigration, a trend responsible for about half of the nation's population growth. But restrictive quotas keep a lid on the number of immigrants who can legally come to the country and work.

In a September 2013 study for the Independent Institute, Texas Tech economist Benjamin Powell and George Mason University economics researcher Zachary Gochenour find that the U.S. holds the line at around 300,000 new workers each year. America's immigration quotas are higher than those of other advanced economies yet not high enough for the labor market to smoothly react to demand. The application quota for the largest worker category was met in just five days in 2013. Not surprisingly, the black market for immigrant labor is booming, with roughly 11 million undocumented workers residing in the United States.

The situation disproportionately hurts small businesses, thanks to the legal and application costs involved in getting immigrant workers, the ability of bigger companies to lobby directly for beneficial changes, and exceptions that benefit companies with an overseas presence. Big companies also can more easily avail themselves of the ultimate workaround: moving the jobs overseas.