The Vanity of American Exceptionalism

Richard Gamble | From the February 2014 issue 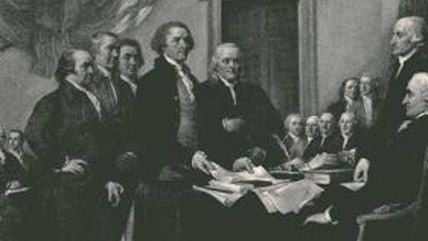 Is the United States unlike any other nation in history? This may seem to be a simple question open to a straightforward answer reached with the help of comparative history, political theory, economics, and sociology. But American exceptionalism is rarely the stuff of dispassionate academic discourse. It has become wedded to modern nationalism. Politicians and journalists, Republicans and Democrats alike, invoke it as a creedal affirmation endorsing a range of American domestic and foreign policy agendas.

Charles Murray, social scientist and author most recently of Coming Apart: The State of White America, 1960-2010, enters the debate with American Exceptionalism, a modest booklet published by the American Enterprise Institute. The idea of exceptionalism, Murray argues, once enjoyed a broad consensus and helped unite Americans around what Abraham Lincoln called their "political religion." Astute European visitors, such as the celebrated Alexis de Tocqueville and the lesser-known Francis Grund, witnessed America's unprecedented achievements and through their books reinforced the young nation's powerful self-conception.

But recently, Murray laments, this once-dominant faith in exceptionalism has "eroded" into a minority creed, requiring a robust defense against a growing number of critics at home and abroad. Murray's bet is that a reclaimed exceptionalism will boost national self-knowledge and help re-right the ship of state, though he ends more with a call to personal reflection than with a prescription for renewed exceptionalism: "Which of the changes that have diminished American exceptionalism are gains to be applauded? Which are losses to be mourned? Thinking through your answers to those questions is one of your most important duties as an American citizen. Only after you have reached those answers can you know what you want for America's future."

The vision of exceptionalism laid out here will be recognizable. Seizing their moment and opportunity, Murray writes, the Founders laid out a blueprint for the American experiment, involving republicanism, a chief executive elected for a limited term, a written constitution, and the transformation of "an ideology of individual liberty into a governing creed." That noble experiment was boosted in the century ahead by a number of blessings: America's geographic remoteness from Europe's turmoil; her abundance of land; her commitment to natural rights and individualism; her citizens' "industriousness, egalitarianism, [and] religiosity, and an amalgam of philanthropy and volunteerism." The 19th-century doctrines of economic and political liberalism, which Murray identifies as his own, worked wonders as "the founding ideology of the nation."

America in 1789 was "an experiment in governance unlike any in the history of the world," Murray enthuses. The Founders "invented a new nation from scratch," leading to "unparalleled" success. But this veneration of the Constitution's innovations ignores more than a century of colonial America's prior experience in self-government and constitutionalism, and its acknowledged debt to ancient, European, and most of all English political theory and practice.

America was not sui generis; it was a variation on themes reaching back thousands of years. The republic did not emerge de novo in the New World; it altered-to use the word chosen in the Declaration of Independence-an existing form of government while announcing the more general right of a people to abolish it.

Murray complains at one point about "both liberals and conservatives quoting snippets of [the Founders'] writings" to endorse their own views. But Murray's own snippets are vulnerable to the same charge. He uses an 1825 letter from Thomas Jefferson to Henry Lee, for instance, to show that after 50 years of reflection Jefferson called the rights language of the Declaration "an expression of the American mind." If this is true, it comports nicely with Murray's claim that America transformed an ideology of natural rights into an enduring political creed.

But Jefferson's letter never connects those dots. In fact, the full text makes a hash out of Murray's insistence on an America made "from scratch." The "object of the Declaration of Independence," Jefferson told Lee, was "not to find new principles, or new arguments, never before thought of, not merely to say things which had never been said before; but to place before mankind the common sense of the subject." He continued: "Neither aiming at originality of principle or sentiment, nor yet copied from any particular and previous writing, it was intended to be an expression of the American mind." Then he cited "Aristotle, Cicero, Locke, Sidney, &c."

Jefferson's letter may not prove a counter-argument against Murray's broader claims, but it certainly doesn't support them. The Declaration author did mention "our rights," but the letter cannot fairly be appropriated for the idea of an America without precedent.

Reflecting on his visit to the United States in the 1830s, Tocqueville wrote of his repeated encounters with Americans' fussy "national pride." "In their relations with foreigners," Tocqueville sighed, "Americans seem irritated by the slightest criticism and appear greedy for praise. The flimsiest compliment pleases them and the most fulsome rarely manages to satisfy them; they plague you constantly to make you praise them and, if you show yourself reluctant, they praise themselves. Doubting their own worth, they could be said to need a constant illustration of it before their eyes. Their vanity is not only greedy, it is also restless and jealous."

On a return visit, Tocqueville would find 21st-century Americans still flattering themselves and seeking flattery from others. This craving for praise was not a credit to the American character in the 1830s, and it certainly isn't now. Our preoccupation with being exceptional, with figuring out just how exceptional we are, and then constantly reminding ourselves and insisting to the world on the indubitable truth of that exceptionalism, is not attractive. Like all vanity, it impedes self-knowledge. And it forgets indebtedness to the past.

Charles Murray's version of American exceptionalism is more cautious than most, and his claims are fairly circumspect compared to others. But they are still part of an odd national pastime, one we might have expected Americans to have outgrown by now, much as adults learn somewhere along the way not to constantly brag about themselves. A more modest America might work harder to protect and perpetuate its achievements in the future, rather than insist even more loudly about the achievements of the past.