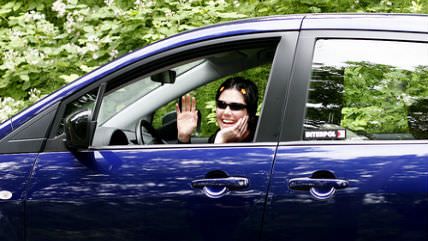 An Ohio judge ruled last week that a state highway patrolman was overstepping legal bounds when he searched the vehicle of a driver who had been too polite to him.

The incident began when Patrolman Jared Haslar, who had been patrolling a speed trap, pulled over Joshua Fontaine for driving 45 mph in a 35 speed zone. According to the court ruling, Ohio v. Fontaine:

Patrolman Haslar approached Fontaine's vehicle, advised him of the reason for the stop, and then requested his driver's license, proof of insurance, and registration, which Fontaine immediately provided. Patrolman Haslar further stated that, during this exchange, he became suspicious of criminal activity. Specifically, Patrolman Haslar testified as follows: "While speaking to Mr. Fontaine I felt that his body language and his behavior was a little bit unusual. He was extremely — like almost overly polite, and he was breathing heavily at times while I was talking to him."

Based on "reasonable suspicion" that Fontaine was up to no good, Haslan brought the man back to his patrol car where he patted him down for weapons and wrote up a traffic ticket. At this point, a new officer, Patrolman Feierabend, arrived with a drug-sniffing dog. The canine reportedly sniffed a positive so the officers searched the vehicle sans warrant, uncovering a loaded .40 caliber handgun and a bag of marijuana.

The trial court rejected the prosecution's charge though and ruled to suppress the firearm and marijuana from the evidence, arguing that excessive politeness does not constitute probable cause to search a vehicle.

The state filed a motion to appeal, which Judge Mary J. Boyle also rejected. The three-judge appellate panel considered only the question of whether the initial search of Fontaine's car violated the Fourth Amendment protection against unreasonable searches. The court found that as soon as Patrolman Haslar finished writing the warning, he could not justify the search for drugs without some evidence that criminal activity was afoot, reports the Newspaper, a political journal on driving.

"We agree with the trial court that 'overly polite' and 'heavy breathing' are not sufficient indicators that give rise to a reasonable suspicion of criminal activity," Judge Boyle concluded. "These factors considered collectively simply do not support such a finding. Since Patrolman Haslar did not have a reasonable suspicion of criminal activity to warrant the canine sniff, the prolonged detention to do so violated Fontaine's constitutional Fourth Amendment rights."