California's recovery is a miracle. Somebody go tell San Bernardino and Stockton. 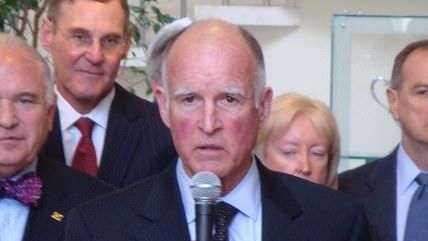 Rolling Stone writer Tim Dickinson appears to have recently been embedded in California Gov. Jerry Brown's public affairs office and returned to tell us all how absolutely awesome he is and how all Democrats should learn from his lessons and California's "miracle" recovery.

If the subject sounds familiar, it is. Dickinson's piece is awfully similar to David Dayen's New Republic piece back in January. I hit Dayen hard at the time for assuming the Golden State's recovery based on its own projections of future revenue, not on reality.

So how did reality turn out? Here's how Dickinson describes Brown's management of the state's economic crisis:

Just two years ago, the idea that California could be a global model for anything was laughable. When Brown took office, the state was staggered by double-digit unemployment, a $26 billion deficit and an accumulated "wall of debt" topping $35 billion. California was a punch line for Republican politicos – a cautionary tale, they said, of the fate that awaits the nation should it embrace Left Coast-style economic, social and environmental liberalism. On the campaign trail in 2012, Mitt Romney joked that "America is going to become like Greece, or like Spain, or Italy, or like?.?.?.?California."

But in astonishingly short order, America's shrewdest elder statesmen blazed a best-worst way out of California's economic morass. With a stiff cocktail of budget cuts and hard-won new taxes, Brown has not only zeroed out the deficit, he's also begun paying down the debt. "Jerry Brown's leadership is a rebuttal to the failed policies of Republicans in Washington," says Neera Tanden, president of the Center for American Progress. "California is proving you can have sane tax systems, raise revenues, eliminate structural deficits and have economic growth."

Fed up with the state's own obstructionist Republicans, California voters have even given Brown a Democratic supermajority in the state legislature. As a result, the Golden State is now reasserting itself as a proving ground for the kind of bold ideas that Republicans have roadblocked in Washington – including a cap-and-trade carbon market, high-speed rail and education-funding reform.

Some of the highest taxes in the country apparently counts as "sane taxes"—and yes, at one point the story blames Proposition 13 on California's problems, as required by every progressively-leaning piece on the state's finances.

We'll give Dickinson (and Brown, of course) credit for waiting until there are actual numbers to support the claims of California's improvement. But note that I'm using the words "improvement" not "recovery." When you're living on the street, a move into a homeless shelter is an improvement. It's not a recovery.

The governor's tactics have brought some short-term fiscal stability to California. As the governor himself has pointed out, the state will need to maintain discipline to pay down that massive debt. Dickinson notes an unexpected boost in state revenue in the spring from capital gains taxes. But it's a mistake to look at that small set of numbers and declare a trend. The latest numbers from the state controller's office (pdf) show the state bringing in $270 million dollars less income tax than they projected and budgeted for in July, largely because of folks accelerating their capital gains last year to avoid those tax increases that are supposed to save the state.

Dickinson completely glosses over the serious troubles with the rail program, vaguely referring to the court battle but not even bothering to analyze the claims that the program voters approved is not the project Brown and the California High-Speed Rail Authority are putting forward. Presumably Dickinson wrote the piece before the recent judge's ruling casting doubt on the project's future, but he spares little more than a glance at the train's very serious problems.

Similarly, Dickinson fails to provide any sort of critical analysis when praising Brown for embracing the Affordable Care Act:

California also made headlines this spring when it unveiled sample rates for individuals in its new insurance exchange, which will serve up to another 5 million residents. Many had predicted sticker shock as premiums adjusted to cover Obamacare's expanded benefits. Instead, the increases were modest and plans affordable. Even before federal subsidies, 25-year-olds can get coverage for $141 a month; 40-year-olds for $219. The system is working, health advocates say, because California used its bargaining power to force insurers to offer uniform products and compete on price. "We held insurers' feet to the fire," bragged Peter Lee, the governor's executive director for California's insurance exchange.

Great! Wait, how much does it cost now for those insurance plans? Ah, see, there's the rub. These are, indeed, price increases, as was noted back in May by those who don't simply accept what they're told.

There's more to criticize in Dickinson's piece, but I'll settle for noting one glaring omission – the same sin committed by the New Republic and many progressives declaring California has recovered: absolutely no mention of California's pension debts and obligations This money, billions of it, is separate from the "wall of debt" Brown is referring to. Government employee pensions threaten to consume the tax increase supporters all claim is going to be used for schools.  The word "pension" is not uttered in Dickinson's report at all. No comprehensive state fiscal analysis – not just California, but any state – should be treated seriously if it doesn't at least touch on the state's pension obligations. Doing so might poke a great big hole not only in any claims of California's recovery, but also in the entire progressive defense of the state, as it involves taking aim at the state's powerful, entrenched union interests and massive, uncontrolled, unaccountable bureaucracy – beyond just the police and prison unions.

Back in April, Steven Greenhut explained how big government and more taxes most assuredly have not "saved" California.