Political speech is a right, not a privilege 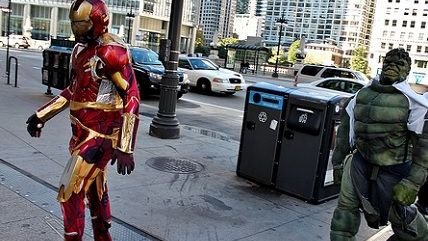 Over at the Daily Caller, Zac Morgan and Joe Trotter of the Center for Competitive Politics (which represented the plaintiffs in the case that created Super PACs) explain the ridiculousness of Congress' latest attempt to restrict political speech by using comic book superheroes. Via the Daily Caller:

Consider the strange case of Dr. Bruce Banner, the Hulk's alter ego. In the film "The Incredible Hulk," Dr. Banner is a researcher at the fictional Culver University working with the military on radiological experiments. Presumably, Banner was paid for this work by the federal government through a Pentagon contract. In doing so, Dr. Banner's right to contribute was, well, smashed.

You see, while under present law, most Americans are permitted to give up to $2,600 to any candidate of their choosing, federal contractors are forced to forfeit that right.

Things are different for Iron Man, AKA Tony Stark, the CEO of Stark Industries. The fictional Stark Industries has boatloads of government contracts. In the first Iron Man movie, Tony Stark is captured in Afghanistan by terrorists shortly after demonstrating the effectiveness of a new type of missile—"the weapon you only have to fire once"—to the U.S. military. Earlier in the film, Tony boasts to a reporter for Vanity Fair about technological breakthroughs in medicine and "intelli-crops" funded by his company's military contracts. But because Iron Man is not a sole proprietor, his constitutional rights are shielded.

Does it make sense to ban a gamma radiation researcher from contributing to members of Congress because of concerns about corruption, while allowing the CEO of a major contracting company to contribute? Of course it doesn't.

Morgan and Trotter note Banner could face five years in prison for making a campaign contribution. Real life government contractors are suing against the arbitrary rule. Morgan and Trotter write that "[i]f they prevail, all sole proprietors will be able to share the right to contribute with the rest of America. Rules that pick and choose who get to maintain their basic constitutional rights on the basis of employment are incompatible with the First Amendment."

Congress, of course, loves to demonize political speech that's exercised in the form of campaign donations because Washington politicians are staked in the myth that "money corrupts politics" when, in fact, it's power that corrupts politics. As I've written many times before, politicians don't need corporations or corporate influence to succumb to corruption, their own personal greed for money and power is sufficient.

A 2008 documentary from Fox News, "Porked: Earmarks for Profit" provided several examples of this: congressmen like former speaker Dennis Hastert and Democrat Paul Kanjorski earmarked millions in taxpayer money that benefited not the project of any corporation or corporate donor, but their own personal coffers. The push to limit free speech by restricting campaign donations is an easy out for Washington's politicians, as it may make it harder for Americans to participate in the political process but does nothing to curb the power of Washington's politicians to spend the people's money on their own personal financial enrichment. Corporate money is an easy scapegoat for politicians looking to divert responsibility for political corruption from themselves, where it actually belongs. The solution, then, to corruption in politics is to cut government spending, not your spending on politics.