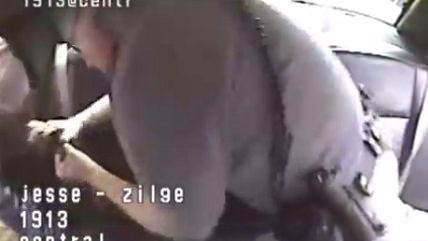 Last August, Eric Hightower was maced repeatedly by police and kicked in the face while he was down during an arrest in St. Paul, for allegedly threatening his ex-girlfriend, that was caught on at least one cellphone video. Earlier this week, it was reported the police chief had decided to fire one of the officers involved and suspend the other (even though prosecutors had previously declined to press charges against the cops, saying there was not enough evidence to prove beyond a reasonable doubt the use of force was unreasonable). The disciplinary action, of course, is not final because of a union grievance process.

Police also released video from inside the back of the patrol car, which showed one of the cops, Matthew Gorans (who the police chief said was fired, even though he remains listed as a city employee), appearing to mace Hightower in the ear after pulling him completely inside the squad car. In addition to challenging the disciplinary actions the police chief is trying to take against the officers, the St. Paul Police Federation is now suing the city for releasing the squad car video without first obscuring Gorans' face, after the union asked the city not to release the video. They're claiming the officer has a right to privacy that should preclude the city from releasing video of a city employee abusing his authority in a city-owned car caught on a city-owned camera. Don't forget public employees enjoy these privileges because they're heroes.

Here's the video from inside the patrol car over which the union is suing:

And here's dashcam video that was also released this week.

h/t sloopyinca for the original story