The 3 Best and Worst Moments of Last Night's GOP Debate

After the circus in Colorado, did Fox Business deliver a debate of ideas? 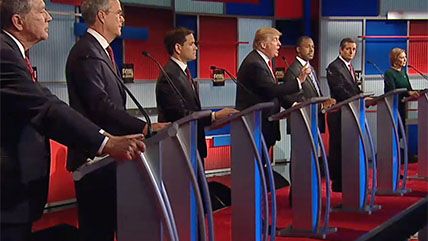 After the chaos of October's CNBC debate, the newly culled Republican field met last night in Milwaukee to focus on ideas. But were the Fox Business moderators able to get straight answers from the candidates on important issues?

Reason TV sucked out the hot air and drilled down to the substance. Watch the video above for The 3 Best and Worst Moments of the Fourth GOP Debate.

Rand Paul finally came out of his debate hibernation to cast a shadow on the GOP's war hawk faction. The Kentucky senator countered Marco Rubio's assertions that he is a "committed isolationist" by pointing out that it's not very conservative to increase government spending on the military, as Rubio wants. True isolationism, according to the Senator, comes from the other candidates' threats to cut off dialogue with Russia, Iran, or other perceived enemies, a step that Reagan did not take even during the height of the Cold War.

Aside from Donald Trump, who paid lip service to limited foreign intervention mostly to needle Jeb Bush, the rest of the field launched a barrage of promises to keep the bombs flowing and the boots grounded, no matter the lives lost or the money spent. From creating no-fly zones in Iraq and Syria to arming every militia from Kurdistan to Ukraine, the ideas on parade offered no respite from the arrogance and fear tactics of the past two administrations.

The Republicans presented plans that generally simplify the tax code and reduce rates. While the extent and nature of the proposals varied, the candidates focused on the way the current complexity of the code favors wealthy, politically connected organizations—which are uniquely able to hire the army of lawyers necessary to wade through it all, and to lobby Congress to insert favorable provisions.

Unfortunately, that bit of sanity was balanced out by a fresh round of crazy about immigrants. After Donald Trump's usual wall schtick, Ted Cruz described immigration as an "economic calamity" for Americans, despite the evidence that immigration increases the standard of living for all. He even suggested that journalists don't cover this calamity because they don't face job insecurity or competition from foreign workers.

The best moment of the night came with the Republicans' forceful arguments against crony capitalism and the growth in government that fuels it. Citing everything from Obamacare to Solyndra, the candidates pitched an end to government that picks winners and losers, systemically hurting the poor and the vulnerable while helping the rich and the well-connected.

Finally, batting cleanup with the worst facepalm of the debate was Ohio governor John Kasich, whose vision of presidential leadership is to abandon all principle and reason during times of crisis. In response to everything from water crises to bank failures, Kasich believes that it is the job of the executive to do something in the heat of the moment, before rational reflection and the better part of human nature emerge to spoil the party. According to Kasich, "Philosophy doesn't work when you run something."

What do you think were the best and worst moments of the debate? Tell us in the comments. Scroll down for downloadable links. And don't forget to subscribe to Reason TV's YouTube channel for notifications when new material goes live.