Should the Supreme Court Allow Us to "Go to Hell"?

Reason's Damon Root on The Long War for Control of the U.S. Supreme Court 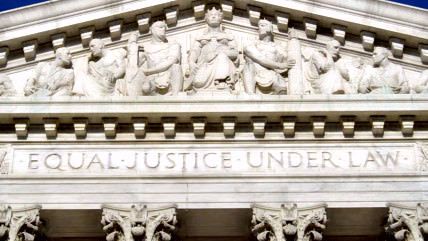 During his talk at Reason Weekend in Santa Barbara, Damon Root, senior editor of Reason magazine and author of Overruled: The Long War for Control of the U.S. Supreme Court, contrasts Justice Holmes' influential legal philosophy with a new wave of contemporary libertarian jurisprudence.

Justice Holmes' persuasive case for judicial restraint is being carried into the 21st century by Chief Justice John Roberts. This view sees the Court tending to defer to the moral authority of democratic majorities and their elected representatives. For example, Obamacare survived a Constitutional challenge in National Federation of Independent Business v. Sebelius precisely because of Roberts' willingness to yield to the will of legislatures. "It is not our job to protect the people from the consequences of their political choices," he wrote in his majority opinion.

While Roberts makes the case for judicial deference, libertarian jurists advocate defiance. In this view, attorneys like Alan Gura and Randy Barnett argue that the Constitution should prevail over the majority vote. The court's job is to protect people from the consequences of their own choices, if those choices violate the Constitution.

At Reason Weekend, Reason Foundation's annual donor event, Damon Root discussed how these conflicting judicial philosophies have played out in a variety of historically important cases. From Kelo v. City of New London to District of Columbia v. Heller, those who take the deferential side view libertarian legal theory as undemocratic. While libertarians often regard judicial deference as unconstitutional.

It's a debate that's nearly as old as the Constitution itself.