Trump's Messy Pardon Spree Left Too Many Behind. Biden Must Do Better.

Criminal justice groups say Biden should move the pardon process out of the Justice Department and consider categorical clemencies. 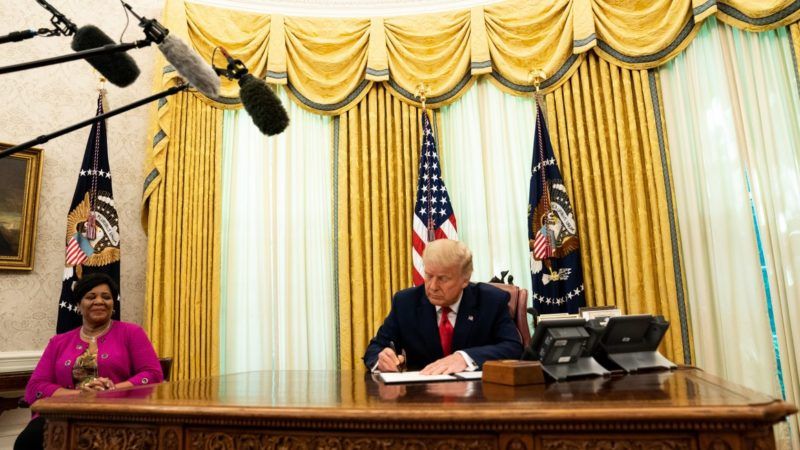 President Donald Trump pardons Alice Marie Johnson during a ceremony in the Oval Office of the White House on August 28. (ANNA MONEYMAKER/UPI/Newscom)

Shortly after 1 a.m. EST on January 20, the White House released the final list of pardons and commutations of President Donald Trump's term. It was the end, for better or worse, of months of feverish work by clemency advocates, federal inmates, and their families to secure clemency before Trump left office.

Some received a second shot at life. Of the 143 pardons and commutations, major newspaper headlines focused, understandably, on those of cronies, rappers, and political allies, but the list also included dozens of obscure cases of vindictive prosecutions and excessive sentences.

One of those was David Barren, whose case Reason wrote about in 2017. Barren was serving a life sentence for a nonviolent drug crime when President Barack Obama commuted his sentence. However, Obama only commuted Barren's sentence from life to 30 years, which would have left him behind bars until he was in his early 70s.

Chris Young, whose case Reason profiled in 2018, also received clemency from Trump. Young was sentenced to life in federal prison for his role in a drug trafficking ring. Because he turned down a plea deal and exercised his constitutional right to trial, prosecutors used a federal "three strikes" law to automatically enhance his sentence to life. None of his co-defendants, including the alleged ringleader, received life.

Young's life sentence had actually been reduced to 14 years after his lawyer, Brittany Barnett won a rare motion challenging his sentence, but he still had several years left behind bars. According to Barnett, Young was in solitary confinement under the Federal Bureau of Prisons' COVID-19 quarantine protocols when the White House released the list.

"He was in the hole for 97 days awaiting transfer to a lower security facility, and that's where he got the news," Barnett says. "I was there to pick him up when he came out around 3:30, so he found out about two and a half hours before his release."

Weldon Angelos and Amy Povah, both of whom served draconian drug sentences before being released early and becoming criminal justice advocates, received pardons.

For others, though, the early morning of January 20 was a crushing disappointment.

"On the 20th, I had to make a lot of really horrible calls to people," says Shon Hopwood, a Georgetown Law professor and clemency advocate.

Forbes reported on the case of Luke Scarmazzo, who is serving a 22-year sentence for operating a medical marijuana dispensary in California. Clemency advocates were given strong indications that Scarmazzo would be freed, so much so that Scarmazzo had his bags packed and ready to go on January 19. His family had started preparing for his arrival. On January 20, he was still sitting in prison as President Joe Biden was inaugurated.

Among the words clemency advocates used to describe the last months of the Trump White House's pardon process in interviews with Reason were "haphazard," "chaos," "a circus," and "completely random." In one commutation case from December, a woman didn't know that her terms of supervised release had been commuted by the president until a Reason reporter texted her.

Criminal justice advocates say the Biden administration now has an opportunity to avoid the pitfalls of both the Obama and Trump White House's clemency efforts, and they are pushing the White House to embrace a more muscular, independent pardon process.

In late January, the American Civil Liberties Union took out a six-figure ad buy urging Biden to commute the sentences of 25,000 federal inmates who are incarcerated under outdated statutes, elderly or medically vulnerable, or incarcerated for drug offenses.

Many criminal justice advocates also say the Biden administration should move the pardon review process out of the Justice Department, where petitions are typically vetted by the Office of the Pardon Attorney.

"It makes absolutely no sense for these petitions to go through multiple layers of review within the Department of Justice, the very department that prosecuted them in the first place," Barnett says. "There's a huge conflict of interest there."

The Obama administration launched a large-scale clemency initiative aimed at nonviolent drug offenders, but criminal justice advocates were deeply disappointed by the results. Although the initiative ultimately led to clemencies for 1,715 federal inmates, foot-dragging and resistance from the Justice Department, including then-Deputy Attorney General Sally Yates, hamstrung the process and led to many worthy cases being denied.

"If Sally Yates couldn't be objective, I have a hard time seeing how we can rely on someone within the system, within DOJ, to be objective about [clemency]," Hopwood says. "On the flip side, the Trump process was even worse because you had to rely on criminal justice reform organizations—that part doesn't bother me so much, but so much of it was about access."

The Trump White House boxed out the Office of the Pardon Attorney and instead relied on an informal task force of advisers and trusted advocates to bring forward worthy clemency candidates.

The upshot of this was several people that the Obama administration passed over were granted commutations, such as Alice Johnson, a grandmother who was serving a life sentence for a nonviolent drug crime until mega-celebrity Kim Kardashian made a personal appeal to Donald Trump.

The downside was that the regular pardon process ground to a halt. While the Trump White House held up individual cases like Johnson's as evidence of unfair drug sentences and the human capacity for redemption, it never showed much interest in applying that rhetoric to the larger federal prison population. As a result, Biden has inherited an executive branch with roughly 14,000 pending clemency and pardon petitions, an all-time high.

And although the Trump White House took its clemency program out of the Justice Department, advocates say interference still torpedoed deserving clemency petitions.

David Safavian, director of the American Conservative Union Foundation's Nolan Center for Justice, wrote in a February Facebook post that the White House counsel "did everything possible to delay, obfuscate, undermine or stop petitions from reaching the President's desk."

"The bottom line is that [the White House counsel] and DOJ colluded to prevent President Trump from doing the right thing," Safavian continued. "And they were successful in far too many righteous cases."

For example, Hopwood himself was on a shortlist of potential pardon candidates. Hopwood served 11 years in federal prison for bank robbery. While inside, he became a talented jailhouse lawyer and had two petitions for certiorari accepted by the Supreme Court. After his release, he passed the bar and became a professor at Georgetown Law. Hopwood didn't advocate on his own behalf, but several others pushed his case.

"I was begging them to get [Hopwood] a pardon," says Safavian. "Do you get any better of a case where someone has turned their life around and really done something spectacular after serving a long prison sentence? I mean, good grief."

Hopwood says he's relieved he didn't get a pardon, though.

"Understand that from my perspective, the worst possible result for me would have been me getting a grant of a pardon and none of my clients are getting it," he says.

Hopwood's fear illustrates the other downside of the Trump White House's approach to clemency: It became an access game, and, like everything else in Trump's universe, it fostered at least the appearance of being transactional.

"Whether or not someone gets a merit review of their case should not depend on whether they know Kim Kardashian or whether they know a lobbyist that used to work at the Trump White House or, for that matter, whether they know me," Hopwood says. "That's not a great system for going forward if we want everyone to have equal access to clemency."

Some paid tens of thousands of dollars to lobbyists to try and secure clemencies from the White House. The Washington Post reported that Matt Schlapp, chairman of the American Conservative Union, made $750,000 for about a month of lobbying work. Jack Burkman, a cartoonishly incompetent conservative political operative, charged $92,000 for work on behalf of a client who didn't receive a pardon. (Tolman took on paying clients as well, but he notes that he also worked on more than 20 pro bono cases and charged far less than what his regular hourly rate would have been.)

Although Trump's pardons of underlings led to calls to restrict the president's pardon powers, Tolman says that would be a grave mistake.

"It's rough because it's clouded by Trump doing the pardons for his friends and colleagues," he says. "I don't think that it's wrong to criticize that because it does highlight a double-edged sword, but we need pardons and need to overhaul this system if regular people are going to have consideration."

Several other clemency advocates, such as Mark Holden, chairman of the conservative group Americans for Prosperity, support the idea of the White House creating a blue-ribbon committee to vet clemency petitions.

The Biden administration also has the opportunity for broader, categorical clemencies. Holden says the White House should look at felonies for simple possession of marijuana and other drugs.

Barnett, Chris Young's attorney, estimates that there are still 600 to 700 federal inmates sentenced to die in federal prison under the same "three strikes" enhancement—known as an 851 enhancement—that was used against Young. Congress reduced those penalties when it passed the First Step Act in 2018, but those changes weren't retroactive, meaning they have no effect on those already sentenced.

"We have people serving life sentences today under yesterday's drug laws," Barnett says. "It's very disheartening to see all these 851 lifers where, if the law was simply retroactive, they would be walking out of the door."

And there are the countless other incarcerated and formerly incarcerated people whose stories have yet to be told.

"It's horrifying what we've done in our country with the war on drugs the last 40 something years," Holden says. "But there are so many stories out there about people who were put in for life and then changed."

"That's why it's important with these clemencies to tell these stories," Holden continues. "We did some of that, but it wasn't done enough. I hope that [the Biden administration] is going to be focused on that and tell these stories about people."