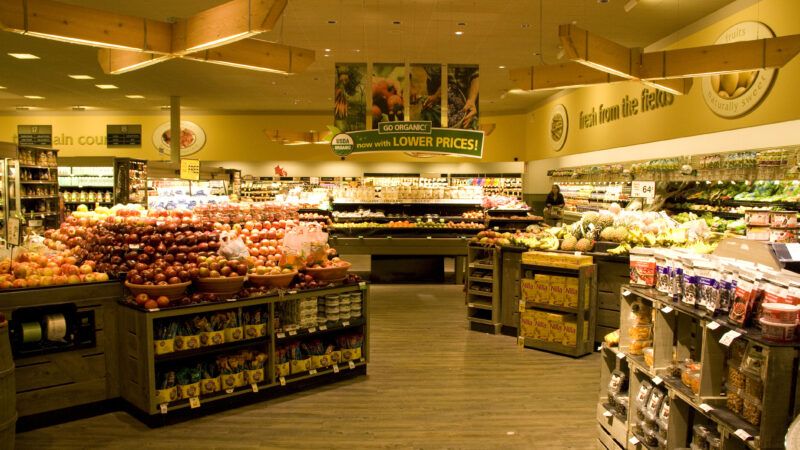 Hazard pay ordinances mandating wage premiums for grocery store workers during the pandemic are spreading across the West Coast. Following them are store closures and complaints from owners that these new laws will soon put them out of business.

On Tuesday, Quality Food Centers (QFC), a Kroger-owned supermarket chain, announced it would be closing two of its Seattle locations. The decision, the company says, was "accelerated" by the city's new mandate that large grocery stores pay their employees an additional $4 per hour.

"When you factor in increased costs of operating during the COVID-19, coupled with consistent financial losses at these two locations, and this extra new pay mandate, it becomes impossible to operate a financially sustainable business," said the company in a press release.

That ordinance was passed unanimously by the Seattle City Council in late January and went into effect earlier this month. It is set to last as long as the city's declared COVID-19 emergency is in effect. It applies to all grocery stores that are larger than 10,000 square feet and are operated by companies with more than 500 employees globally.

Those aren't the only stores that could be on the chopping block. Everywhere pandemic hazard pay policies have passed, store operators are warning they'll soon be out of business too.

Steve Mullen, an owner of a Grocery Outlet in Seattle's Madrona neighborhood, said that the hazard pay law is costing him an additional $20,000 in labor costs each month.

"The store does not make that much on a monthly basis and [the hazard pay ordinance] will push the store into a significant deficit," said Mullen in court filings tweeted  out by independent Seattle journalist Kevin Schofield. "I cannot continue to operate a store that is consistently unprofitable. If losses occur as predicted, I will likely be forced to close the Madrona Grocery Outlet store."

It's the same story for Michael Sandberg, the owner of a Grocery Outlet in Seattle's Lake City area, who said the city's new law will increase his costs of employing his current 22 employees by about $10,000 a month.

"The store does not make nearly that much" per month, wrote Sandberg in a court filing for the same lawsuit. "Paying the mandatory hazard pay will cause the Lake City Grocery Outlet store to go into the red."

Mullen and Sandberg's declarations are part of a lawsuit being brought by the Northwest Grocery Association and the Washington Food Industry Association, two trade groups representing grocers, against the city of Seattle in the U.S. District Court for the Western District of Washington.

Their complaint alleges that the city's hazard pay ordinance is preempted by the federal National Labor Relations Act (NLRA), which the grocers argue leaves it to companies and unions, not local or state governments, to hash out compensation agreements.

The two groups' complaint also says the city's hazard pay ordinance violates the Equal Protection Clause of the U.S. Constitution's 14th Amendment and the Washington Constitution by arbitrarily requiring only grocery stores to pay out these wage premiums.

The California Grocers Association (CGA) is making identical arguments in six separate federal lawsuits it's brought against cities in that state which have passed their own hazard pay ordinances for grocery store workers.

Those lawsuits have also sparked identical claims of hardship from grocery store owners and operators.

John Franklin, chief financial officer for Northgate Gonzalez Markets, a Southern California grocery chain, declared in court filings in the CGA's lawsuit against the city of Long Beach that had the pay ordinance been in effect during all of 2020, its three Long Beach locations would have lost between $47,000 and $74,000 each month.

Defenders of hazard pay for grocery store workers, sometimes called "hero pay," say that grocery chains are using store closures as a scare tactic to discredit these policies and avoid pay increases they can easily cover with their record pandemic profits.

United Food and Commercial Workers (UFCW) 21—the union representing grocery store workers in Washington—called the latest QFC store closures "a transparent attempt to intimidate other local governments" from passing similar laws. The union notes that Kroger ended its voluntary $2-an-hour hero pay bonus in May 2020, even as the company's profits "soared."

Teresa Mosqueda, a Seattle City Council member, said in her own statement attacking the QFC closures that one of the company's stores was already slated for redevelopment.

The city of Long Beach has a made similar argument when defending its hazard pay ordinance from the CGA's lawsuit. Included in one of the city's court filings were links to news articles reporting that Kroger's net earnings doubled year-over-year during the first three quarters of 2020.

The grocery industry has countered that its increased profitability still leaves it with razor-thin profit margins that would be more than erased by these hazard pay policies.

A report from economic consultancy firm Capitol Matrix Consulting, prepared for the CGA as part of their lawsuits, found that a $5-per-hour hazard pay premium—which was passed in Oakland and is being considered in Los Angeles—could increase stores' average labor costs by 28 percent and overall costs by 4.5 percent. That's about three times the normal profit margin for grocery stores, and twice the profit margin grocers were making at the height of the pandemic.

Were a $5-per-hour hazard pay law to be applied to the entire state of California, grocery stores would have to cover those costs either with a collective $4.5 billion increase in prices or shed 66,000 jobs, the report says.

Even when it comes to grocery store regulations, there's no free lunch.