Under punitive federalism, localities refuse dictates from above while state and federal officials retaliate. 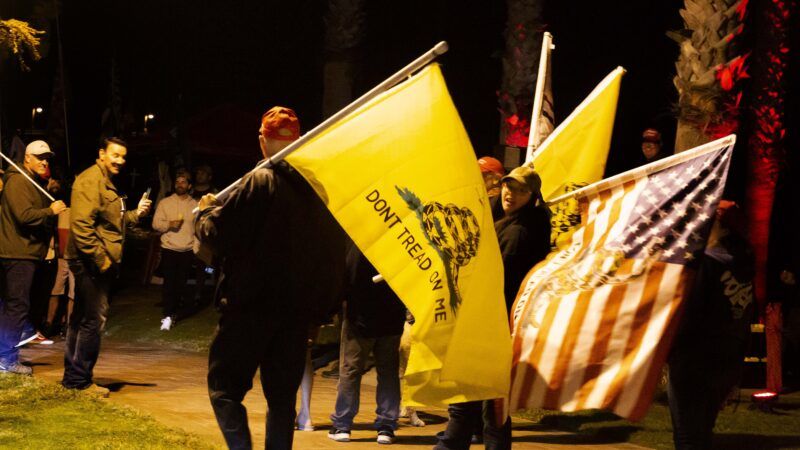 Across the country, government officials are tightening and reimposing curfews, stay-at-home orders, mask mandates, and other restrictions as COVID-19 numbers climb. But with public patience over lockdowns wearing thin, many individuals and local authorities openly reject rules that drive people to poverty and despair. County sheriffs in California, New York, North Dakota, Oregon and elsewhere say they'll have nothing to do with enforcement efforts and spar with governors who resent such independence.

It's the rebellious spirit of the earlier sanctuary city and Second Amendment sanctuary movements, amplified by the pressures of the pandemic into an eruption of what some legal scholars call "punitive federalism." Get used to it, because our politically polarized era offers fresh soil for such dictates and defiance.

California's revolt is especially widespread. "All told, over a third of Californians live in a county with a sheriff promising not to enforce the governor's stay-at-home order," Reason's Christian Britschgi pointed out this week. Ironically, when Gov. Gavin Newsom threatened to withhold funds from jurisdictions that ignore his dictates, Riverside County Sheriff Chad Bianco snapped back that the governor was behaving just like President Trump, who California's elected officials have criticized for using money in an effort to extract compliance.

"These more recent conflicts represent more than 'uncooperative federalism,'" Richard Schragger of the University of Virginia School of Law wrote earlier this year. "What has emerged instead is something that could be called 'punitive federalism'—a regime in which the periphery disagrees with or attempts to work around the center and the center seeks to punish those who do so, not just rein them in."

But Schragger referred not to battles over pandemic lockdowns, but to conflicts between state governments imposing restrictions on firearms and self-defense rights and localities that refuse to enforce them. He saw the inspiration for such revolts in earlier resistance by sanctuary cities against federal immigration rules.

"The Second Amendment sanctuaries movement borrows from the language and rhetoric of the immigrants' rights movement," he added. "Insofar as the enforcement of state and federal law often depends on the cooperation of local officials, the movement also deploys some of the same strategies: passive non-cooperation, indirect resistance, and rhetorical disobedience."

In both cases, localities resisted rules imposed further up the political food chain that conflicted with dominant local values.

Sure enough, tensions in California predate the pandemic and reflect serious conflicts between those who control the state's government and some localities heavily populated by those with strongly divergent views. In rural northern California "the sweeping pandemic edicts out of Sacramento are the latest in a long line of grievances about California's liberal policies, from new gas taxes, to minimum wage hikes, to environmental restrictions, to gun control," the Sacramento Bee noted in October, before the latest round of rules and resistance.

The pandemic, with its potentially dire consequences for bankrupted business owners, idled workers, isolated families, and sidelined students has brought such long-simmering tensions among America's mutually loathing political factions to a head.

"The COVID-19 pandemic will be 2020's defining federalism event," Greg Goelzhauser of Utah State University and David M Konisky of Indiana University observed this past summer in Publius: The Journal of Federalism. "Moreover, the pandemic has reinforced the themes of polarization and punitiveness governing contemporary intergovernmental conflict. The partisan divide continues to permeate most dimensions of American federalism."

Like Schragger, Goelzhauser and Konisky describe the cycle of resistance and retaliation among different levels of government as "punitive federalism." But they focus on recent federal vs. state battles over pandemic responses, immigration, environmental rules, and other issues and wonder "whether punitive federalism is a short-term phenomenon idiosyncratic to the Trump administration or a more lasting feature of American politics."

Still, they allow that "this type of retaliatory behavior may have been prevalent in past presidential administrations." Frankly, it's obvious from the history of sanctuary cities and Second Amendment sanctuaries—as well as earlier battles over drug and gun laws— that "punitive federalism" isn't new, it's just becoming more widespread.

That such conflicts are very likely to be a "more lasting feature of American politics" is suggested by the deep polarization of American politics and the fact that Americans approached the recently concluded presidential election unwilling to accept a loss.

"Our data shows that partisans are quite open to their preferred presidential candidate rejecting the legitimacy of the election if they claim credible evidence of illegal voting or foreign interference," the Democracy Fund Voter Study Group reported in August.

As I write, not only does President Donald Trump's team continue to contest results that show by any reasonable measure that he lost, but only 24 percent of Republicans trust the outcome (compared to 95 percent of Democrats and 67 percent of independents) in an NPR/PBS NewsHour/Marist Poll conducted from December 1-6.

Republicans convinced that the election was stolen from their guy are unlikely to abide by the dictates of the new Biden administration. And Democrats who already shared a mutual hatred with Republicans are almost certain to clash with Republican officials at the state and local level.

Additionally, there's plenty for people to battle over in a politically polarized country in which partisan identity has come to infect almost every aspect of life.

"What if polarization is less like a fence getting taller over time and more like an oil spill that spreads from its source to gradually taint more and more previously 'apolitical' attitudes, opinions, and preferences?" wrote Pennsylvania State University's Daniel DellaPosta in a study published in June in American Sociological Review. He points out that even lifestyle choices have taken on political overtones.

Even worse, government in our country claims near-absolute authority to intervene in almost all matters, as we've seen during the pandemic. That leaves little in life immune to dictates, revolt, and retaliation.

So, get accustomed to orders issued from on high that are then ignored by dissenting individuals and localities. And prepare for the resulting battles and attempted punishments. That sort of punitive federalism is likely to be a common sight in the years to come.