Coronavirus Curfews Are Trending Again, Despite Total Lack of Evidence They Help

Plus: Against the conservative case for antitrust action, New York City shuts down schools again, and more... 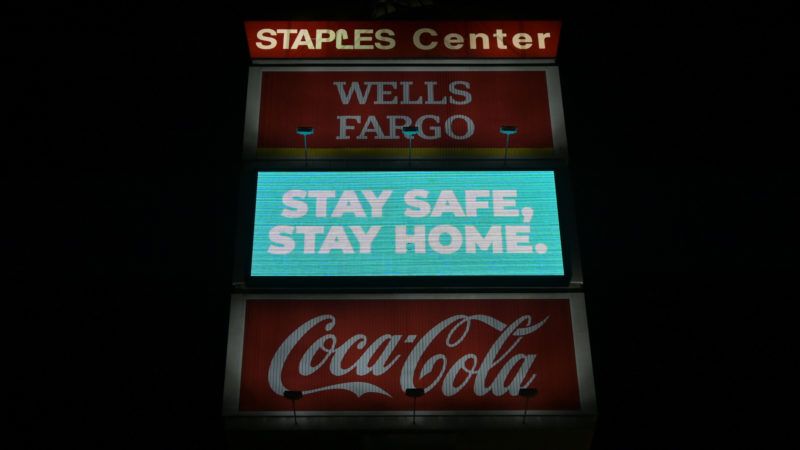 Coronaviruses don't get more deadly or dangerous after dark. Yet across the country, leaders are imposing new curfews on their residents and businesses in the name of stopping COVID-19.

Those advocating for curfews argue that when it comes to places serving alcohol, earlier closures will mean fewer drunk patrons, better decisions, and better hygiene. ("Shenanigans happen at night," said one public health professor.) Others suggest that limiting the hours people can shop or leave their houses recreationally will decrease opportunities for the virus to spread overall. And some leaders have suggested they're doing it to send the right message about the pandemic.

But…there's no evidence that this is indeed the case. And it's just as likely that limited hours mean more people cramming their shopping, socializing, and errands into the same hours, making establishments more crowded and ensuring longer waits in transmission-friendly lines. Besides, not everyone has a job or home and family responsibilities that make state-approved socializing hours possible. Making residents stay in their homes after a certain hour eliminates people's ability to meet non-household members in safer ways—like taking walks together, meeting in yards or on porches, or patronizing places where the weather or heat lamps still permit—and it also invites selective and discriminatory enforcement.

Public health experts have criticized curfews, although some have done so on the grounds that they don't go far enough. The consensus seems to be that there's just little logic in them.

George Mason Univesity epidemiologist Saskia Popescu told Cleveland.com that the challenge with imposing curfews is that "it not only is likely to condense patrons into a smaller window of time, but for things like an outdoor restaurant or even gym, that might be a time with slower business and fewer people, which would make it safer. A better course of action is to focus on those high-risk activities and either temporarily halt them or find ways to make them safer."

"It seems like it's spreading all over, but I've seen no evidence it helps anything," Kent State University public health professor Tara C. Smith told Vox's Dylan Scott. "I've not seen a single public health person recommend this as an intervention. I'm mystified at their popularity."

Despite the lack of evidence for their efficacy, New York, Ohio, and Oklahoma are among the states to bring curfews back. New York Gov. Andrew Cuomo last week announced a curfew for alcohol-serving establishments. Oklahoma Gov. Kevin Stitt gave a new order on Monday that institutes an 11 p.m. curfew for bars and restaurants.

California is reportedly considering a statewide curfew, too, as counties like Los Angeles go ahead with them. On Friday, nonessential retail businesses in Los Angeles will have to start closing at 10 p.m.

Ohio's 10 p.m. to 5 a.m. curfew—announced by Gov. Mike DeWine on Tuesday—starts tonight and lasts for three weeks. Restaurants are allowed to stay open for takeout and delivery but must close for on-premises dining during those hours. All retail businesses must also close. Curfew violators could be charged with a second-degree misdemeanor, which could come with up to 90 days in jail or a $750 fine.

"The governor did not say how the curfew will be enforced," notes Cincinnati's WLTW5. "He said cars on the roads will not be pulled over, but individuals seen congregating after curfew hours may be approached by law enforcement officers."

Media outlets across the state have reported on the havoc the curfew is expected to wreak on business owners, musicians, and others affected. Some business owners expressed relief at not being shut down entirely again, but others said that's no consolation. "Our business is a 10 p.m. to 2 a.m. business. To say what [DeWine's] doing is crushing us, is an understatement," Tom Zellner, co-owner of The Warehouse Tavern, told the Mansfield News Journal. Nick Tanchevski, owner of Uncle John's Place, told the paper: "No, I feel absolutely no relief. In fact, I feel more anxious."

It's not all the fault of government orders.

"Everybody is terrified so nobody is coming out anyway," said Tanchevski. "This is the worst week I've had since COVID started in March."

But the curfews are making a bad situation even worse, without any evidence that they'll reduce transmission of COVID-19.

"For weeks, Gov. Mike DeWine has told story after sad story of the coronavirus spreading because Ohioans let their guard down among family and friends at informal gatherings, weddings and funerals," writes Cleveland.com columnist Laura Hancock."So it raised a big question when the governor, amid an alarming increase in virus cases and hospitalizations, announced […] Ohioans would be under a curfew from 10 p.m. to 5 a.m. -- not the time of day when those types of gatherings commonly take place."

"This curfew is going to do nothing, absolutely nothing," said Sheriff Richard K. Jones of Butler County, Ohio. He told a local Fox affiliate that he's not the "mask police" or the "curfew police" and won't enforce the curfew.

I'm not going to have my employees go out and make arrests, or stop people. People are angry, and I don't care what the governor says, somebody will disobey or run. Bad things will happen from this curfew.

In New York, the editors of the Queens Gazette call for focusing on irresponsible venues rather than punishing all businesses:

We were told some restaurants turn into dance clubs after 10 pm, and if that is the problem, why not ban that? But legitimate restaurants serving food and wine, such as our wonderful Queens restaurants that are struggling to survive, don't deserve to be penalized. We understand the severity of coronavirus and efforts to stop the spread, but we cannot let our local businesses be assaulted by a misguided policy.

[…] Also included in this new policy are gyms. How busy are gyms after 10 pm? Don't most people go earlier? We believe it makes more sense to extend hours, much in the same way we have extended areas of restaurants by expanding into outdoor seating. If less people can go later, won't they be going earlier and limiting free space even more?

We understand the purpose and the necessity of limiting exposure, but this latest policy will cause unnecessary hardship.

The coronavirus curfews are basically hygiene theater, designed to give the appearance of strong action around the virus, even if they fail to actually cut COVID-19 spread and simply cause some categories of people more hardship instead.

The Trump campaign's proposal--literally I am not making this up--is that *THE TRUMP CAMPAIGN* will obtain and count all or a subset of the Pennsylvania mail ballot envelopes and, based on the formula in footnote 3, let the judge know if he should declare them the winner. pic.twitter.com/3VI5uG26Gb