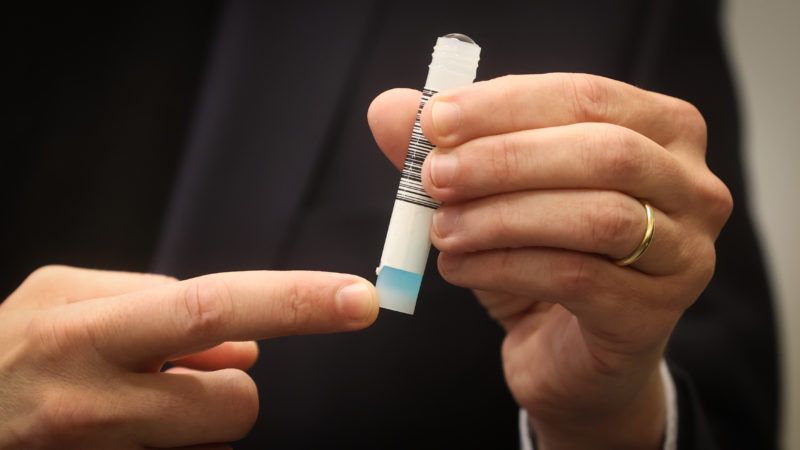 Rapid results testing for COVID-19 is still scarce in a lot of places in the U.S., and at-home tests that don't need to be mailed into a lab for processing have been banned, so the Lucira test's approval is a big deal.

But at-home testing—and all its game-changing potential—is still being limited by government regulators, who will require people to get a prescription for the home test kit. Unless every single person gets prescribed the test via telemedicine, this ridiculous FDA rule has the potential to not only make at-home testing more difficult, less useful, and less widespread, but it could also put people at more risk.

Unfortunately, this sort of counterproductive meddling has been a recurring theme throughout the pandemic (and, well, always) for the FDA. The agency has so far been holding up at-home testing over paternalistic concerns that people would not be able to properly implement the tests or interpret results, reports the Associated Press:

More than two dozen companies have been racing for months to develop the first, rapid home-based test for COVID-19. However, the FDA outlined a number of study requirements for manufacturers.

These hurdles have less to do with COVID-19 specifically, and more to do with decades-long concerns about whether people without any medical training can accurately screen themselves and interpret the results.

The FDA has only ever approved one home test for an infectious disease—an HIV test. And even commonplace over-the-counter tests—such as home pregnancy kits—were subject to years of scrutiny before FDA allowed their use in the 1970s.

To the FDA, it is apparently preferable that a whole bunch of people don't get tested at all, or risk infection waiting for hours in a doctor's office or testing line, than for some small fraction of folks to somehow do their at-home tests wrong. Government math strikes again!

"To date, the FDA has authorized nearly 300 tests for coronavirus," notes A.P.:

The vast majority require a nasal swab performed by a health professional and must be processed at laboratories using high-tech equipment. A handful of tests allow people to collect their own sample at home—a nasal swab or saliva—that's then shipped to a lab, which usually means waiting days for results.

They also report that the Lucira at-home test kit "uses technology similar to genetic laboratory-based tests that are the standard tool for COVID-19 screening. That's different than most rapid tests currently used in the U.S., which look for viral proteins called antigens—not the virus itself."

Pennsylvania's highest court rejects Trump campaign theory on election fraud. "The Pennsylvania Supreme Court threw out one of the Trump campaign's longest-running post-election complaints Tuesday, ruling that officials in Philadelphia did not violate state law by maintaining at least 15 feet of separation between observers and the workers counting ballots," reports NBC News. "The ruling is likely to undercut the Trump campaign's case in federal court, where Rudy Giuliani joined a hearing Tuesday afternoon to argue on behalf of President Donald Trump's effort to contest the election results in Pennsylvania."

Meanwhile, Trump has fired the guy who kept calling out his election interference lies. Christopher Krebs, director of the Department of Homeland Security's Cybersecurity and Infrastructure Security Agency, had been tweeting and updating his agency's website since the election with direct rebuttals to Republican claims about all sorts of voter fraud.

These wars have gone on for nearly two decades. What he's really saying is that he wants perpetual war for just-in-case reasons, knowing there's no real oversight from Congress or mandate from the American people. It's immoral and dangerous. https://t.co/VX48WmOQbt

• The Federal Reserve and Department of the Treasury are cooking up plans to put more American bank accounts under surveillance. If it's able to lower a "travel rule" threshold to $250, it will let the federal government access more people's financial data, explains Andrea O'Sullivan.

• I recently moved from Washington, D.C., to Cincinnati, Ohio. Reason Staff Editor Liz Wolfe moved from Austin to Brooklyn. We wrote back and forth about our differing experiences with the pandemic in these places.

• An update on California's pandemic orders, from the Los Angeles Times:

A California appellate court Tuesday stayed an injunction from a lower court that barred Gov. Gavin Newsom from issuing executive orders that create new law, the latest development in a legal challenge to the governor's response to the COVID-19 pandemic.

• Ohio is closing all retail businesses between the hours of 10 p.m. and 5 a.m. (thereby forcing shoppers into a more concentrated time frame and more crowded stores).

If you missed today's media briefing where @SecretaryLevine discussed the four new #COVID-19 mitigation efforts in Pennsylvania, you can watch the video here:https://t.co/CQO55QZy42

• So did Colorado. And Oklahoma. And Montana. The biggest city in South Dakota. And Illinois.

• Sen. Chuck Grassley (R–Iowa), the second oldest person in the Senate, has COVID-19.

• Politicians don't like the First Amendment, a never-ending story…

It is unfathomable to me that the U.S. Congress is asking private businesses for "lists" of their users & FB's info on them. I'm not equating the two in terms of severity, but this is like Alabama trying to get the NAACP's membership lists. Reminder: Alabama lost that case.

• Rapper Lil Wayne was arrested for owning a gun:

Prosecutors are supposed to file charges to further public safety… not to put feathers in their own caps. https://t.co/ziD3PeFpOM

• Reason's Eric Boehm on why you shouldn't buy the debunked Dominion conspiracy theory.

Twitter also announced #Spaces, a feature that will let users join virtual rooms where they can engage in real-time, audio conversations with others. pic.twitter.com/YpdRfW0PAi