The Republican Antitrust Suit Against Google Is a Progressive Dream

The government is going after Google not to stop consumer harm but to level the business playing field. 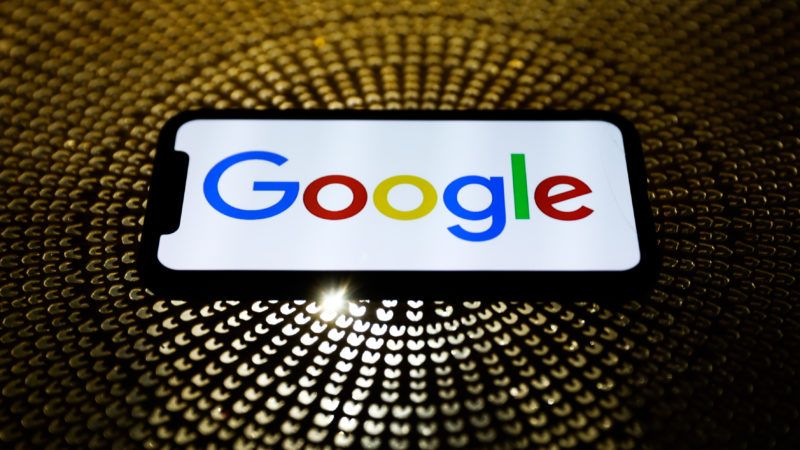 Google is being sued by 11 states and the federal government, who claim the tech company "is a monopoly gatekeeper for the internet." Google maintains this monopoly "through anticompetitive and exclusionary practices" in violation of the Sherman Antitrust Act, they allege.

To reach this conclusion, the complaint—filed Tuesday in the U.S. District Court for the District of Columbia—employs a loose conception of monopoly and barely bothers trying to offer a theory of consumer harm. The complaint's big beef with Google is basically that it's big, as well as useful, stubbornly popular, and extremely profitable.

Google is "one of the wealthiest companies on the planet, with a market value of $1 trillion and annual revenue exceeding $160 billion," the government notes in the suit's second paragraph.

The lawsuit against Google does not accuse it of conspiring with its competitors or of acting unilaterally to block new entrants into the market. Nor does it cite common political gripes about Google, such as the idea that it's working too many different hustles and needs to be "broken up," or the claim that Google search and YouTube are ideologically biased.

Rather, it accuses Google of unfairly dominating the U.S. markets for general search services, search advertising, and general search text advertising, mainly through distribution deals that give Google apps or search preset default status on some browsers and mobile devices.

To win its suit, the Department of Justice (DOJ) "will need to show that Google is dominant in the market, abusing the power associated with that dominance, and harms consumers," notes the American Action Forum's Jennifer Huddleston.

Antitrust experts say the government's case isn't great. "U.S. v. Google has a long, long way to go," said Anthony M. Sabino, a professor at St. John's University, in a statement. "This case won't be easy for the government," said Willaim Rinehart, senior research fellow at the Center for Growth and Opportunity at Utah State University.

"They know they have an uphill battle," said the Mercatus Center's Brent Skorup. "Most of Google's services are offered for free to consumers, so authorities will need compelling evidence of anticompetitive agreements or harm to consumers."

These default deals are the primary mechanism by which the suit claims Google acted unlawfully and harmed consumers. Yes, all of this hoopla is over the fact that Google—mostly through a combination of leasing its Android operating system to third-party phone manufacturers and paying Apple and others to put Google as the default search option on browsers—comes as an easily changeable default option on many browsers and mobile phones.

For this very ephemeral status it "pays billions of dollars each year to distributors," including Apple, LG, Motorola, and Samsung, says the lawsuit.

The government calls these arrangements "exclusionary," saying Google "owns and controls" search access at these points, which make up "roughly 80 percent of the general search queries in the United States." But no one is obligated to keep these default applications or search settings (in fact, Google's own app store offers alternatives). Google only "owns and controls" these distribution points until consumers get their hands on the phone.

That's one of many times the complaint bandies about muddled statistics to make it sound like Google is more powerful than it is. At another point, the lawsuit states that "for mobile browsers, Google is the default search provider for both Apple Safari (approximately 55 percent share) and Google Chrome (over 35 percent share), which together account for over 90 percent of the browser usage on mobile devices in the United States." But—again—being set as the default doesn't mean people continue to use it, and besides, there are many ways to search that don't involve a mobile phone web browser.

The evidence "suggests that Google has become the default through a product most people prefer, not by anti-competitive behavior," writes Huddleston. "Additionally, a growing number of product searches now start on Amazon, not Google. .. In many cases, consumers already have easily accessible alternatives and a growing number of innovative choices."

Nonetheless, the government argues that it's default status deals—not what it acknowledges is Google's greater scale, greater name recognition, and more relevant results—that make it popular. And they say this popularity itself presents Google with an unfair advantage over competitors since it makes Google a more attractive option for advertisers and phone providers than competitors like Yahoo, Bing, or DuckDuckGo.

The government claims "countless advertisers must pay a toll " because of Google's alleged monopoly, and accuses Google of unfairly maintaining this edge through such nefarious tactics as being high quality. "Google discovered that it could increase the number of clicks—and its own profits—by ranking ads to promote those with greater relevance," the government complains. "To help determine placement of ads, Google uses a 'quality score.'"

It's hard to see how either consumers or advertisers would benefit—or change their ways—just because Google apps didn't come preloaded on some phones or as the default search in some browsers. Presumably, Google wouldn't magically lose its huge name recognition and Bing or Yahoo wouldn't suddenly have better results. The government can meddle around the market's edges all it wants, but they can't force consumers to choose inferior products just to equalize market share.

"The complaint makes a lot of hay out of Google's deal with Apple to be the default search engine on Safari," and "of course, being the default helps increase market share," tweeted Alec Stapp, director of technology policy at the Progressive Policy Institute. "But Tim Cook has also said that Google is the best search engine. Should the default be an inferior product?"

"It will be a heavy lift for the DOJ to show real consumer harm," said Jessica Melugin, associate director of Center for Technology and Innovation at the Competitive Enterprise Institute. "That this bar is unlikely to be met is precisely why so many antitrust enthusiasts are calling for a fundamental rewriting and expansion of U.S. antitrust laws. Those proposed changes sacrifice the primacy of consumer welfare and insert competitors and broader socio-economic goals in its place."

This has been a progressive goal for a while. After a "liberalization trend" that saw consumer welfare emerge as the main goal of antitrust law enforcement, "it's being tugged back to form a support system protecting 'competitors'—guarding against low prices, escalating quality, and market rivalry," explained Thomas W. Hazlett for Reason last year.

One of this movement's biggest proponents has been Sen. Elizabeth Warren (D-Mass.). "America has a long tradition of breaking up companies when they have become too big and dominant—even if they are generally providing good service at a reasonable price," Warren wrote in 2019, citing Gilded Age forebears as a guide for how to "restore competition to the tech sector" and promising to use antitrust law against Google and Amazon.

The new lawsuit against Google also echoes the ethos of an early October report from the House Subcommittee on Antitrust, Commercial, and Administrative Law. The American Prospect's David Dayen suggested the report uses "tech as simply a case study on what an invigorated legislative body can do to rein in the corporate power of any type."

"I applaud this suit as desperately needed and long overdue," tweeted Sen. Josh Hawley (R–Mo.) this week. "Google is a monopoly and I think they have been abusing their monopoly power," said Sen. Ted Cruz (R–Texas) on CNBC.

The 11 states joining in the Google lawsuit are all states with Republican attorneys general.

But the Google antitrust suit is a profoundly anti-free market document, wholly in line with modern progressive and leftist conceptions of heavier government intervention in today's marketplace. Ultimately, the government is going after Google for being bigger and more capable than others, not to stop some consumer harm, but to try and level the playing field.