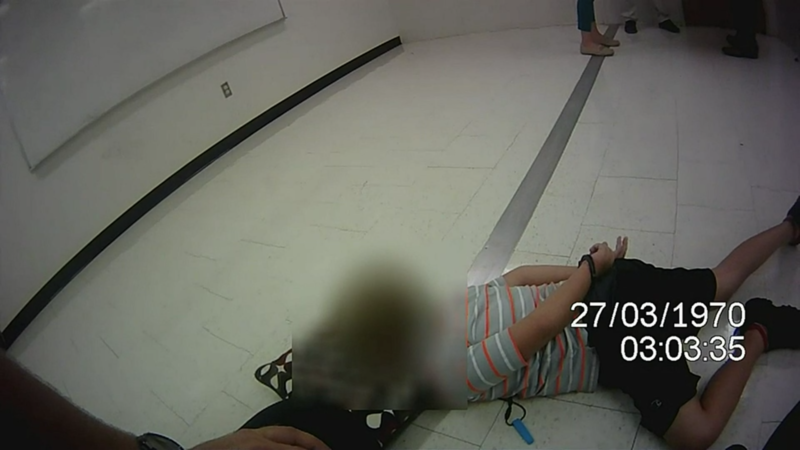 A North Carolina mother filed a civil rights lawsuit last Friday against a policeman who handcuffed and held her autistic 7-year-old son prone on the ground for nearly 40 minutes.

According to the lawsuit, the boy, who is identified only by the initial L.G., had been diagnosed with autism spectrum disorder the previous year and placed in a special needs classroom. On September 11, 2018, L.G. became overwhelmed and began acting out and spitting in class. He was taken to a "quiet room" to calm down when Fattaleh allegedly walked by and saw the boy spit on the ground. Fattaleh handcuffed L.G.'s hands behind his back and restrained him stomach-down on the floor.

Staff placed a pillow underneath L.G.'s head, and Fatalleh asked him several times if he could breath and if he was comfortable. But he also appeared to taunt L.G. at times.

"If you, my friend, are not acquainted with the juvenile justice system, you will be very shortly," Fattaleh says at one point in the body camera footage. "You ever been charged with a crime before? Well, you're fixing to be."

At another point, Fattaleh puts his knee on L.G's back and says, "Have you ever heard the term 'babysitter?' I take that term literally, my friend."

L.G.'s mother, who is also not named in the lawsuit, arrived to pick him up. Fatalleh told her L.G. was facing one to two counts of assault. The boy was not charged, and Fatalleh resigned from the department shortly after the incident.

The suit, which also names the city of Statesville and the Iredell-Statesville Board of Education as defendants, argues that Fatalleh unreasonably restrained L.G., violating his Fourth Amendment rights and inflicting emotional distress.

"It is incomprehensible to me that anyone would think this response is appropriate and necessary," Alex Heroy, a lawyer representing the family, told The Washington Post. "You don't need to put metal handcuffs on a 7-year-old and pin them down and turn their arm."

Yet it happens, and more frequently than one might think. In August, body camera footage emerged showing officers in Key West, Florida, trying and failing to handcuff an eight-year-old boy, whose wrists were too small for the cuffs. An Orlando school cop made national headlines last September when he arrested a six-year-old girl.

In the wake of the police killing of George Floyd earlier this year, there have been increased calls from civil rights groups and criminal justice advocates to get police out of schools, and several major cities—Minneapolis, Denver, Seattle, Charlottesville, and Portland, Oregon—have disbanded or slashed the budgets of these programs.

Activists point to viral videos of school resource officers using excessive force on children to bolster their claims that police in schools contribute to the so-called school-to-prison pipeline. In February, an officer at a high school in Camden, Arkansas, was relieved of duty after video showed him putting a student in a chokehold and lifting the student off the ground. Last December, a North Carolina officer was fired after he brutally body-slammed a middle-schooler. In November, a sheriff's deputy in Florida was arrested and charged with child abuse after a video showed him body-slamming a 15-year-old girl at a special needs school.

Civil liberties groups and disability rights advocates have long warned that a surge in the number of Florida school resource officers was leading to unnecessary criminalization and use of force against minorities and children with disabilities. The investigation found several cases where children with diagnosed behavioral disorders were restrained, handcuffed, and involuntarily committed for psychiatric evaluations because of behavior beyond their control. These cases often lead to regression and trauma for the kids involved.

According to the lawsuit, L.G. is now being homeschooled.