'I'm Paying for My Own Suicide': Scenes From a Quieter Night of Protests in D.C.

A heavy but hands-off militarized police presence squared off with demonstrators in the nation's capital tonight. 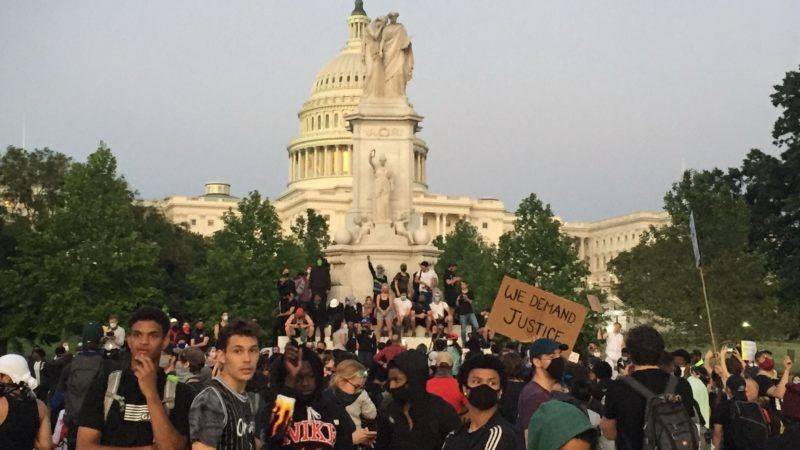 The fifth time's the charm for anti-police demonstrations in Washington, D.C. Tuesday's protests drew large crowds and a heavy, militarized police presence, but less of the violent crackdowns or vandalism that characterized the last several nights.

The 7 p.m. curfew issued by D.C. Mayor Muriel Bowser remained in effect for today, with exceptions granted only for essential workers, media, and people voting in the District's primary elections. That didn't stop a crowd of several thousand from gathering along H Street just north of the White House across from a newly fenced-off Lafayette Square well into the evening.

The same area was the site of some of the worst violence yesterday when police rushed a peaceful crowd—firing smoke grenades and possibly pepper balls or tear gas—so that President Donald Trump could make a short speech in front of the adjacent St. John's Episcopal Church. On Sunday night the church was briefly set on fire.

Today was much more relaxed. Demonstrators perched themselves on the St. Johns building, using a megaphone to shout directions at the crowd. Protesters kept up a steady stream of now typical chants. ("Black lives matter." "No justice, no peace." "I can't breathe.") Others circled through the crowd offering free bottles of water, granola bars, and hand sanitizer. There is a pandemic happening, after all.

Periodically, the crowd would take a knee, urging the riot police and National Guardmen positioned on the other side of a large chainlink fence between them and the White House to do the same. (They did not reciprocate.)

The tensest moments (and it's a stretch to even call them tense) came from protesters shaking the fence, an action that drew sharp rebukes from others in the crowd.
Some outspoken demonstrators shouted taunts of "oink, oink" or "get another job" at the police. Most didn't get that personal.

A few people sparked up joints (something that's legal in the District, though not in public and not after curfew). One man wearing a dinosaur suit complained that he had to pee. A middle-aged woman picked up litter dropped by more inconsiderate protesters.

Between the chants, there were snippets of real talk. One black woman observed you couldn't tell which were the good or bad officers just by looking at them. Another complained about her tax dollars going to fund the military and police, saying "I'm paying for my own suicide."

Approximately an hour past curfew a large number of demonstrators marched from the White House to the U.S. Capitol, nearly two miles away. Their path was flanked by a heavy presence of military vehicles and federal law enforcement officers, who had already made their presence felt throughout the downtown.

Crowds of agents wearing FBI- and DEA-emblazoned vests kept pace with protesters, as did a contingent of bicycle-riding officers from the city-controlled Metropolitan Police Department. All kept their distance.

At one point, a gaggle of FBI-jacketed officers walked beneath a giant stone rendition of the First Amendment on the side of the now-shuttered Newseum.

The march culminated at the Peace Monument outside Congress, where demonstrators held a moment of silence for George Floyd, Breonna Taylor, Eric Garner, and other black victims of police violence.

Another demonstration outside the Lincoln Memorial also went off without any incident, though the law enforcement presence there was notably massive.

The entire affair felt almost normal. It was certainly a far cry from the chaotic, dystopian-feeling clashes of the previous days. The mix of a large but lower-energy crowd and a more hands-off approach from law enforcement helped keep the peace.