No, Jared Kushner Did Not Suggest That Trump Might Unilaterally Delay the Presidential Election

There is a difference between reporting facts that make the president uncomfortable and manufacturing facts to fit a preconceived view of him. 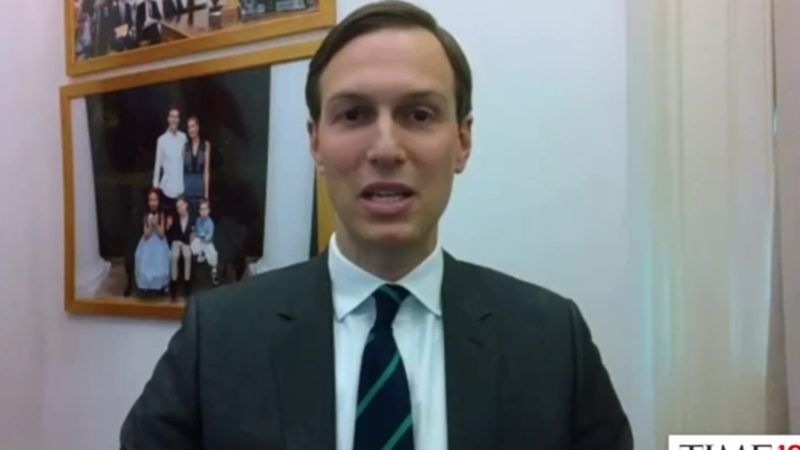 Did Jared Kushner, President Donald Trump's son-in-law and adviser, suggest that his boss might try to unilaterally (and illegally) reschedule this fall's presidential election? That's the way The New York Times portrayed Kushner's comments, but it is not a fair interpretation.

The Times reports that Kushner "refused on Tuesday to rule out postponing the presidential election in November, a comment that fed directly into Democratic concerns that President Trump might use the coronavirus crisis to delay or delegitimize the contest and one that contradicted Mr. Trump himself." The headline: "Kushner, Law Aside, Doesn't Rule Out Delaying 2020 Election." The subtitle: "The opinion of a White House staff member has no bearing on when the election is held, but his comment played into the concerns of President Trump's detractors."

Bennett: Is there any scenario, including a second outbreak in the fall, where the elections move past November 3rd?

Kushner: That's too far in the future to tell. Nothing that I'm aware of now, but again, our focus right now is just on getting the country—

Bennett: Will [unintelligible] commit that the elections will happen on November 3rd?

Kushner (laughing): It's not my decision to make, so I'm not sure I can commit one way or the other. But right now, that's the plan, and again, hopefully, by the time we get to September, October, November, we've done enough work with testing and with all the different things we're trying to do to prevent a future outbreak of the magnitude that would make us shut down again. I really believe that once America opens up, it will be very hard for America to ever lock down again.

Far from agreeing with Bennett's premise, Kushner said, "It's not my decision to make, so I'm not sure I can commit one way or the other." The Times story omits the first part of that sentence, making it seem like Kushner was asserting a power he was actually disclaiming. Maybe Kushner meant that the timing of the election is Trump's decision, but there is no evidence to support that interpretation, other than the suspicion that the president is eager to assert dictatorial powers for his own political benefit in the midst of the COVID-19 pandemic.

Some things Trump has said—in particular, his dubious assertion of "total" authority over the imposition and lifting of state lockdowns—have reinforced that view. But in practice, he has not actually tried to override state and local responses to the epidemic. To the contrary, many of his critics on the left have argued that the Trump administration should have asserted more authority in this area.

In this context, it is rather puzzling that Times reporters Annie Karni and Maggie Haberman thought it was necessary to remind us that "the opinion of a White House staff member has no bearing on when the election is held," since "even the president himself does not have the authority to unilaterally postpone Election Day, which by law takes place the Tuesday after the first Monday in November." Their explanation for that civics lesson is a model of anti-Trump hostility masquerading as reporting:

Mr. Kushner's comment raised alarms both because of the expansive power Mr. Trump has conferred on members of his family who serve in his administration and because it played into the worst anxieties of Mr. Trump's detractors—that the president would begin to question the validity of the election if he feared he was going to lose.

The presumptive Democratic nominee, former Vice President Joseph R. Biden Jr., gave voice to those concerns at a virtual fund-raiser last month. "Mark my words, I think he is going to try to kick back the election somehow—come up with some rationale why it can't be held," he said.

For the president's most vociferous opponents, pretty much anything he or his underlings say "raise[s] alarms." When those alarms are false, as this one seems to be, the job of serious reporters is not to amplify them but to present the relevant facts.

In the 10th paragraph of the story, we get this response from Kushner:

On Tuesday night, Mr. Kushner sought to clarify his earlier interview. "I have not been involved in, nor am I aware of, any discussions about trying to change the date of the presidential election," he said. A White House official said Mr. Kushner was fully aware that the date was set by federal law.

In other words, the whole premise of the Times story, which was based on Kushner's purported "hedge about the date of the election" (as Karni and Haberman put it), seems to be fundamentally faulty.

Last month, Haberman, who covers the White House for the Times, co-wrote an opinion piece disguised as a news story that portrayed Trump as vain, petty, irresponsible, and self-obsessed. While I think that description, which was based on a content analysis of Trump's comments during COVID-19 briefings, is pretty accurate, the president's supporters probably would disagree. That sort of blatant bias, along with the subtler but still obvious bias epitomized by the Kushner story, shows that the president is right to view many of the reporters who cover him as political opponents.

That reality does not mean all of Trump's frequently unhinged complaints about the press are valid. There is a crucial distinction between reporting facts that make the president uncomfortable and manufacturing facts to fit a preconceived view of him. Does the Times understand the difference?