As Trump Imagines '2.2 Million Deaths' From COVID-19 in the U.S., a Top Federal Disease Expert Cautions Against Believing Worst-Case Scenarios

"They always overshoot," Anthony Fauci says. "Generally, the reality is somewhere in the middle." 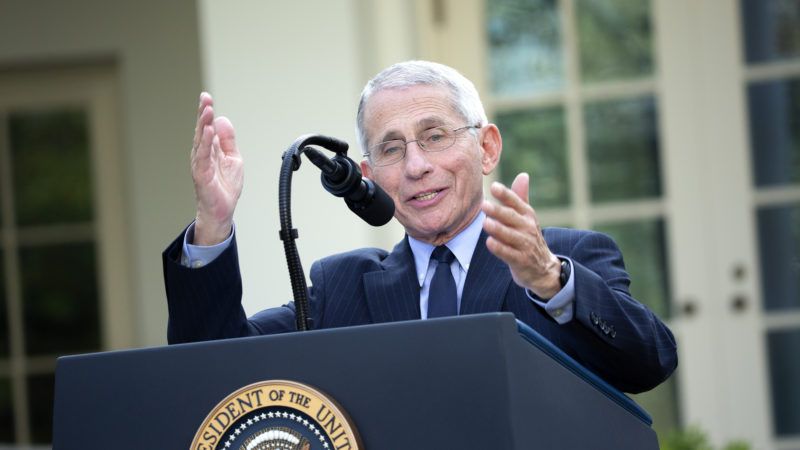 During his COVID-19 briefing yesterday, President Donald Trump suggested that the control measures implemented so far should keep the number of deaths from climbing above 100,000 in the United States. Although that is "a horrible number," he said, the death toll otherwise could be "up to 2.2 million deaths and maybe even beyond that."

Trump has pivoted from minimizing the severity of the epidemic to exaggerating the likely outcome in the absence of extreme measures such as mass business closures and stay-at-home orders. Appearing on CNN yesterday, Anthony Fauci, director of the National Institute of Allergy and Infectious Diseases, offered some words of caution about worst-case scenarios that assume nothing is done to contain, suppress, or mitigate the spread of COVID-19.

Jake Tapper asked Fauci how many COVID-19 cases the United States can expect to see. "To be honest with you, we don't really have any firm idea," Fauci said. "There are things called models. And when someone creates a model, they put in various assumptions. And the model is only as good and as accurate as your assumptions. And whenever the modelers come in, they give a worst-case scenario and a best-case scenario. Generally, the reality is somewhere in the middle. I have never seen a model of the diseases that I have dealt [with] where the worst-case scenario actually came out. They always overshoot. So when you use numbers like a million, a million-and-a-half, 2 million [deaths], that almost certainly is off the chart. Now, it's not impossible, but very, very unlikely."

Those caveats are important because focusing on implausible worst-case projections creates a bias in favor of sweeping and prolonged interventions, which impose enormous costs that might not be justified based on more realistic expectations. In the world we live in, as opposed to the one imagined by modelers when they talk about millions of COVID-19 deaths in the United States, many steps already have been taken to curtail the spread of the virus. These include not just government policies, such as isolation and quarantine, air travel restrictions, and bans on large gatherings, but also voluntary precautions, such as limiting social interactions, working at home, and paying extra attention to hygiene.

When modelers at Imperial College projected 2.2 million COVID-19 deaths in the United States, they were assuming "the (unlikely) absence of any control measures or spontaneous changes in individual behaviour." Although that horrifying number got a lot of attention and has now been embraced by Trump, it was never plausible, even leaving aside the question of whether the case fatality rate (CFR) assumed by the model (0.9 percent) will prove to be correct.

The choice confronting policy makers right now is not between doing "nothing," as that projection assumed, and maintaining lockdowns "for 5 months or more" (or perhaps for "18 months or more"), as the Imperial College report suggested. Rather, the choice involves what kinds of restrictions make sense, where, and for how long.

"Looking at what we're seeing now," Fauci said, "we're going to have millions of cases" in the United States, and it is reasonable to expect "between 100,000 and 200,000" deaths. But he cautioned that "I just don't think that we really need to make a projection, when it's such a moving target, that you can so easily be wrong and mislead people." Deborah Birx, coordinator of the White House's COVID-19 task force, yesterday cited similar but somewhat less alarming estimates, saying "between 80,000 and 160,000, maybe even potentially 200,000 people," could be killed by COVID-19 in the United States.

One unknown variable in these projections is how many Americans will ultimately be infected. Some projections "predicted half of the United States would get infected," Birx said. Another crucial variable is the CFR, which federal public health officials say could be anywhere from 0.1 percent (about the same as the CFR for the seasonal flu) to 1 percent. If half the population were infected and 2.2 million people died, that would imply a CFR of about 1.3 percent, substantially higher than the upper limit of that range—another reason to be skeptical of the worst-case scenario.

Such a high CFR also suggests that the actual number of infections is only about two-fifths bigger than the current number of documented cases, which is highly implausible when testing is so sparse and cases typically involve mild to nonexistent symptoms. "Probably for every case," Assistant Secretary for Health Brett Giroir estimated earlier this month, "there are at least two or three cases that are not even in the denominator."

Based on the available data, which are very limited in the absence of wide testing, it surely is not safe to assume that COVID-19 is only slightly more deadly than the seasonal flu. But neither is it reasonable to assume that the disease is 13 times as deadly. The truth, as Fauci says, is likely to be "somewhere in the middle." In the face of such uncertainty, decisions with profound economic consequences should not be based on one extreme or the other. "Although people like to model it," Fauci told Tapper, "let's just look at the data of what we have, and not worry about these worst-case and best-case scenarios."