Despite broad claims from the company, available police reports don't support the idea that filming everything in front of people's doors stops much crime. 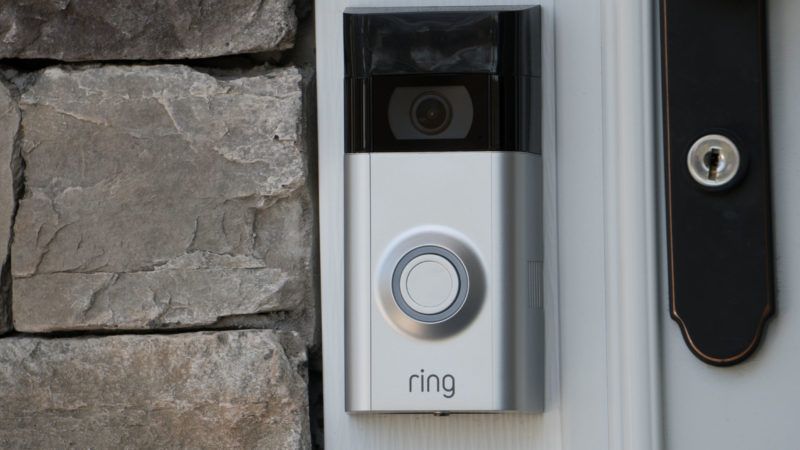 As America moves further into the COVID-19 era, a concerned citizen might start worrying: Hmm, everything is shut down, most people can't legally earn a living, is property crime going to see a huge upswing? Americans may even begin yearning for a world where the authorities see and record everything. Some business owners might fear looting, depending on how long their storefronts must be left unattended.

In light of those worries, it's worth examining what the internet-connected Ring video doorbell, owned by Amazon, which video records the space in front of your door, saves the footage, and allows you to remotely speak to whoever is at your door, has done to curb crime.

Not much, turns out, though Ring and its users are sharing footage with local police in over 1,000 towns now. Ring claims it has "millions" of customers but otherwise does not release hard user counts.

As NBC reported last month, even though Ring hyped their relationship with the cops in Winter Park, Florida, in a promotional video, police there admit not a single arrest has resulted from Ring footage. NBC interviewed over 40 law enforcement agencies spread over eight states and found "little concrete evidence" to support any claim that sharing your doorbell footage with police helps solve or lessen crime.

Indeed, police griped that the connection between Ring-enabled worrywarts and the police led more often to them wasting time "reviewing clips of non-criminal issues such as raccoons and petty disagreements between neighbors. Others noted that the flood of footage generated by Ring cameras rarely led to positive identifications of suspects, let alone arrests."

Thirteen agencies did say arrests have resulted from their access to Ring videos, although "large cities like Phoenix, Miami, and Kansas City, Missouri, said that they don't know how many arrests had been made as a result of their relationship with Ring—and therefore could not evaluate its effectiveness—even though they had been working with the company for well over a year."

Residential burglary and other property crimes have already been on the decline preceding the rise of Ring, and no one seems to have any hard research indicating that the doorbell monitor has played a role. Ring itself also doesn't know, and isn't trying to learn, the facts about its effectiveness in crime deterrence or arrests, even though, as CNET reported in a new analysis of Ring and crime, Amazon's hardware chief Dave Limp said at a public event in September that "We continue to believe that when you add Ring to a neighborhood, crime is reduced."

CNET, however, found when they analyzed property crime stats from:

three of Ring's earliest police partners, examining the monthly theft rates from the 12 months before those partners signed up to work with the company, and the 12 months after the relationships began, and found minimal impact from the technology.

The data shows that crime continued to fluctuate, and analysts said that while many factors affect crime rates, such as demographics, median income and weather, Ring's technology likely wasn't one of them.

Ring continues to hope, despite this lack of evidence that it does much good, that every law enforcement agency in America will sign on to its Neighbors Portal app program. (Ring had made huge claims about their crime-cutting powers in Los Angeles, claims an MIT Technology Review study debunked.) CNET's surveys of crime stats in cities where police allied with Ring found fluctuating crime rates and continuations of previous crime trends before Ring entered the picture. Some cities without Ring-police partnerships showed crime rate cuts comparable to cities in which Ring had allied with the cops. They found no police agencies willing to say they knew for sure that Ring's partnership was an effective crime-cutting tool.

CBS reported on that Neighbors program last month, whereby Ring users who sign up share their doorbell footage with both local police and their Ring-using neighbors who also signed up. This little system allows police to, as CBS reports, create "a so-called 'geofence' around a crime location and [to request] video footage captured on home security cameras filmed at specific times."

As Vice reported last year, "Video posts on Neighbors disproportionately depict people of color, and descriptions often use racist language or make racist assumptions about the people shown…with a Ring camera, users can frame neighbors as a threat." They even found that, of a small survey of 100 posts, "between December 6 and February 5, and the majority of people reported as 'suspicious' were people of color."

Declan McCullagh reported for Reason in our December 2019 issue on this unholy cop/Big Tech alliance, noting the "arrangement…creat[es] a massive surveillance network. In cities dotted by many Ring cameras…law enforcement can probably reconstruct a pedestrian's movements from the time he enters a neighborhood until he exits" and that, alas for those hoping for legal defense from this, "Lower courts have said that you enjoy no reasonable expectation of privacy on a public street, let alone on your neighbor's doorstep."

While we may not have seen much evidence it helps prevent actual property crime, it is easy to see how a network of Ring videos connected to the police could be a tool to help police identify an easier-to-catch variety of criminal: any citizen daring to violate shelter-in-place orders either now or to come. Ring plus facial recognition technology could be a powerful tool for compliance, if not for halting actual property crime. This could become increasingly relevant in an age of coronavirus-related restrictions on people's ability to freely leave their houses.

Sen. Ed Markey (D–Mass.) sounded almost prescient about such potential abuse, when he said after an investigation of Ring last year, "Amazon Ring's policies are an open door for privacy and civil liberty violations. If you're an adult walking your dog or a child playing on the sidewalk, you shouldn't have to worry that Ring's products are amassing footage of you and that law enforcement may hold that footage indefinitely or share that footage with any third parties."