Plus: Who's using Clearview AI?, court rules against Joe Arpaio, and more... 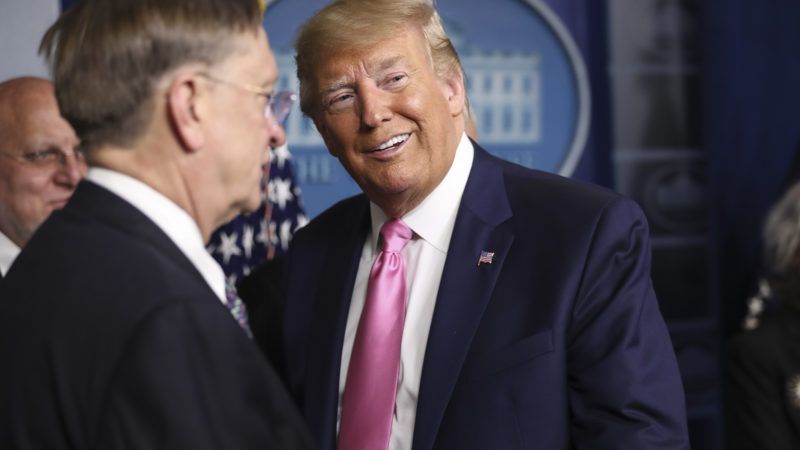 The legal provisions that let the feds secretly spy on digital communications are set to expire soon. Attorney General Bill Barr wants a blanket reauthorization ASAP. But yesterday the president suggested that he may disagree.

"Good talk with @realDonaldTrump yesterday and I'm pleased he is urging FISA reform NOW—and not a reauthorization of the current Patriot Act," tweeted Sen. Rand Paul (R–Ky.) on Thursday morning. That afternoon, the Kentucky senator followed up:

Spoke with @realDonaldTrump . He agrees that the secret FISA court (intended to be used on foreign spies) should be forbidden from ever spying on or investigating Americans, and that Congress should act NOW to make sure of that!

The decision whether to renew the USA Freedom Act as is rests with Congress, of course. But Trump's support for reforms could make a big difference to some Republicans there.

Both Republicans and Democrats have enthusiastically renewed these provisions in the past, and they appear poised to do so again, despite longstanding complaints about abuse of the process. Lawmakers now have until March 15 to decide whether to renew without reforms or pick from several reform proposals.

"In January, a bipartisan pack of privacy-minded lawmakers introduced a bill that would formally end the bulk collection of Americans' records and introduce other reforms to the secretive Foreign Intelligence Surveillance Amendment (FISA) Court to provide some more transparency and better protect Americans from unwarranted surveillance," Reason's Scott Shackford wrote yesterday. Alas,

congressional leaders just want to push through a quick temporary renewal with some less modest fixes. Reps. Jerrold Nadler (D–N.Y.) and Adam Schiff (D–Calif.), chairs of the House Intelligence and Judiciary Committees, put together a reform bill of their own that would extend the USA Freedom Act until 2023.

Nadler and Schiff's bill would end the bulk data collection program but would extend the part of Section 215 of the Patriot Act that lets the FBI secretly collect business records it deems relevant to terrorism investigations. So the feds will be able to easily collect your data when it's in the hands of a third party—and these days, that means most of your data.

Four provisions are set to expire; Lawfare has more details.

Barr has said he wants a "clean" renewal of the act with no reforms, promising that any problems can be fixed through administrative procedure. ("That's the worst possible outcome," argues Shackford, "because it would give Barr the power to decide—in secret—whose privacy rights are protected and whose are not.") But Trump may be breaking with his top cop on the matter.

In addition to the discussion he reportedly had with Paul, Trump yesterday retweeted a post from Rep. Jim Jordan (R–Ohio) that said, "We can't simply reauthorize the system that allowed those lies and omissions to happen." Trump also quote-tweeted with his own comment:

They spied on my campaign! https://t.co/LpIc3cNBnr

"The three surveillance tools on the verge of lapsing are [FISA] provisions…that broaden the FBI's authority to wiretap certain targets and request key documents. They are separate from the tools that the FBI used on [former Trump campaign advisor Carter] Page," CNN points out. But the FBI did use FISA warrants in investigating Page. Trump and some Republicans seem to have latched on to that as a reason to reform the provisions under question now. Weird, but whatever works!