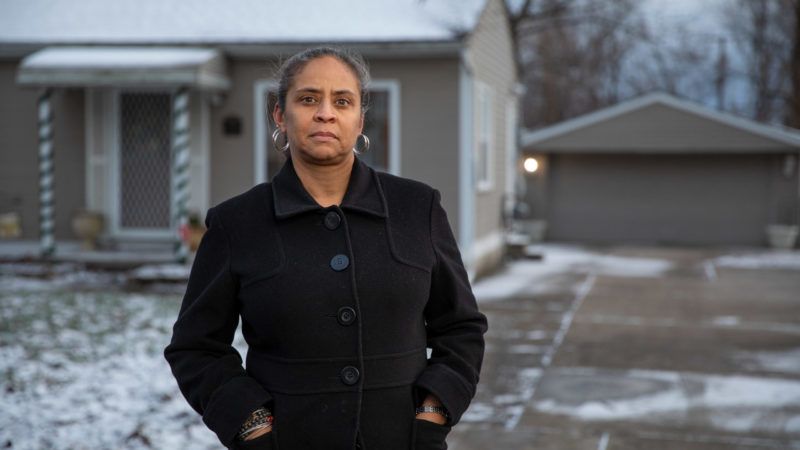 Police twice seized 50-year-old Detroit resident Melisa Ingram's car for alleged crimes she was never suspected of committing. In fact, no one was charged with a crime at all. Nevertheless, the local prosecutor demanded Ingram pay thousands of dollars to get her vehicle back, or else the county would keep it under civil asset forfeiture laws.

Ingram is now a lead plaintiff in a federal class-action lawsuit filed Wednesday against Wayne County, Michigan—which includes Detroit—by the Institute for Justice, a libertarian-leaning public interest law firm. The suit claims that the county seizes cars "simply because they are driven into, or out of, an area subjectively known for having some generalized association with crime," and that the county forces owners through a months-long, onerous process to challenge a seizure, violating their Fourth, Eighth, and 14th Amendment rights.

According to the lawsuit, Ingram loaned her now-former boyfriend her car in late 2018 so he could look for a job. But rather than go job-hunting, the boyfriend was detained by police for allegedly picking up a prostitute. He wasn't charged with a crime, but Wayne County Sheriff's deputies seized Ingram's 2017 Ford Fusion and issued a notice that the county intended to keep it under civil asset forfeiture laws, which allow police and prosecutors to seize property—cash, cars, and even houses—suspected of being connected to criminal activity. Ingram had to pay the Wayne County Prosecutor's Office a $1,355 "redemption fee" ($900 plus towing and storage fees) to get her car back.

Last summer, Ingram loaned her car to her boyfriend again so he could drive to a friend's barbecue. This time, police pulled him over after he left a house that police said was connected to prostitution and/or drug activity. Again, no one was charged with a crime, but the Wayne County Prosecutor's Office demanded another settlement payment from Ingram. This time she didn't have it. She initiated bankruptcy proceedings and relinquished interest in her car.

"My car was very important to me and now my life has been turned upside down," Ingram said in a press release. "Everything suffers when you don't have a car, especially in a city like Detroit. I've been late to work and missed doctor's appointments because I don't have a way to get there. No one should have to go through what I've gone through."

Law enforcement groups say asset forfeiture is a vital tool to disrupt drug trafficking and other crimes by targeting their illicit proceeds. However, civil liberties advocates like the Institute for Justice, which has successfully challenged forfeiture practices in cities such as Philadelphia and Albuquerque, argue there are too few protections for innocent property owners and too many perverse profit incentives for police.

The Institute for Justice is not the first to allege that Wayne County prosecutors and police abuse civil forfeiture and make it nearly impossible for owners to get their cars back. In 2018, Stephen Nichols filed a class-action lawsuit after waiting more than three years for a court hearing to challenge the seizure of his car.

That same year, Crystal Sisson filed a civil rights lawsuit after Wayne County Sheriff's deputies seized her 2015 Kia Soul because she allegedly possessed $10 worth of marijuana.

More than half of all U.S. states have passed some form of asset forfeiture reform over the past decade in response to these concerns, but Wayne County continues to run a particularly aggressive forfeiture operation as part of Operation Push-Off—a local law enforcement campaign that targets drugs and prostitution by surveilling high-crime areas and marijuana dispensaries.

Wayne County seized more than 2,600 vehicles over the past two years, raking in more than $1.2 million in asset forfeiture revenues, according to public records obtained by the Mackinac Center for Public Policy, a free market Michigan think tank.

Of those, 473 were not accompanied by a criminal conviction, and in 438 of those cases, no one was even charged with a crime. In 10 cases, the cars were seized under suspicion of a drug violation, even though the records say police didn't find any drugs.

"The vehicles are worth very little, typically around $1,000 or $2,000," Mackinac Center researcher Jarrett Skorup told Reason. "These are very likely low-income people, people that can't afford to sit around without a vehicle for three weeks or afford an attorney to go challenge it."

The other named plaintiff in the Institute for Justice's lawsuit is 29-year-old construction worker Robert Reeves. Last July, Reeves had his 1991 Chevrolet Camaro, along with more than $2,000 in cash, seized after police stopped him on suspicion of stealing a skid steer from Home Depot. Reeves was never arrested or charged with a crime, and the Wayne County Prosecutor's Office has yet to file a notice of intent to forfeit his car, meaning he hasn't been able to officially challenge it.

Wayne County prosecutors typically offer to settle such forfeiture cases and return the owner's car for a $900 payment, plus towing and storage fees. (You can see one such forfeiture notice here.)

The Institute for Justice argues says these settlement offers, combined with the lengthy and costly process of challenging a forfeiture, amount to a shakedown.

"Detroit's forfeiture program is less like a justice system and more like having your car stolen and paying a ransom to get it back," Institute for Justice attorney Wesley Hottot said in a press release. "Once police seize a car, there is no judge or jury. Instead, prosecutors give owners a choice. They can either pay the city's ransom or hire an attorney and enter a byzantine process that is confusing, time-consuming, and expensive. The process is designed to ensure that owners fail nearly every time. I've watched this happen time and time again, and never once have I seen an owner successfully make it to court and get his or her car back."

The Wayne County Prosecutor's Office did not immediately respond to a request for comment.