The Evidence That Trump Abused His Powers Is Clear and Convincing

The allegations against Trump are more serious than the offenses that led to Bill Clinton's impeachment because they relate directly to his duties as president. 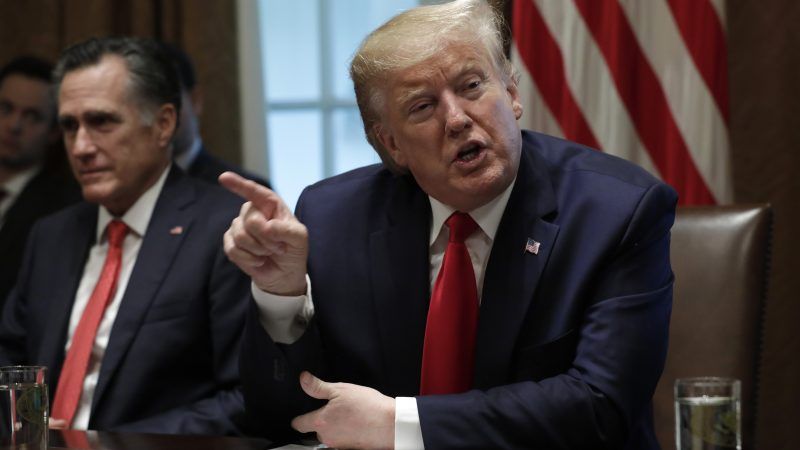 As someone who has found Donald Trump's presidency to be equal parts hilarious and horrifying but is still not convinced that whoever the Democrats end up nominating would be better, everything considered, on the issues I care about, I have mixed feelings about the impeachment inquiry. On one hand, I tend to agree with Gene Healy that the impeachment power, which has never been used to actually remove a president in the 230 years since George Washington started his first term (although the threat of impeachment led Richard Nixon to resign), has been sorely neglected. On the other hand, I'm not sure that party-line votes to impeach Trump in the House and acquit him in the Senate will do much to reinvigorate that power in a salutary way.

For similar reasons, the political impact of impeachment is uncertain. It could help Trump in next year's election by energizing his supporters or hurt him by energizing his opponents. Likewise for congressional Republicans and Democrats. The one thing Trump's impeachment probably won't do is sway anyone who does not firmly identify with either camp. That's a shame, since the conversation about what counts as an impeachable offense is worth having. Instead we have a shouting match between rabid partisans that obscures the important issue of when a president's conduct is so intolerable that his fate should not simply be left for voters to decide.

If Donald Trump were a Democrat (as he was from 2001 to 2009), we can be sure that Republicans would be pouncing on the allegations against him instead of blithely dismissing them. Conversely, Democrats would be doing what the Republicans are doing, resorting to increasingly desperate defenses of their guy. For anyone who does not feel at home in either major party, these reflexive reactions are as mystifying as the passion of baseball or football fanatics is to people who take no interest in professional sports. And given the weird hodgepodge of policy positions that passes for ideology in both parties, this political tribalism is not much more meaningful.

The last time the House of Representatives impeached a president, just five Democrats voted for the two articles that were sent to the Senate, where five Republicans joined all 45 Democrats in voting to acquit Bill Clinton on one article (obstruction of justice) and 10 Republicans joined the Democrats in voting against the other article (lying to a grand jury). This time around, we can expect even fewer legislators to cross the party line, despite the fact that the charges against Trump are more clearly related to his duties as president.

Is that because the evidence against Trump is weaker than the evidence against Clinton? In some respects, it is. But it is hard to take Trump's defenders seriously when they insist not only that his conduct does not warrant impeachment but that he did absolutely nothing wrong.

Start with the July 25 phone call between Trump and Ukrainian President Volodymyr Zelenskiy. "I would also like to thank you for your great support in the area of defense," Zelenskiy says, according to the rough transcript released by the White House. "We are ready to continue to cooperate for the next steps. Specifically, we are almost ready to buy more Javelins [anti-tank missiles] from the United States for defense purposes." Trump immediately responds, "I would like you to do us a favor, though."

The "favor" requested by Trump has two parts. First, he wants Zelenskiy's government to investigate "what happened with this whole situation with Ukraine" involving "Crowdstrike" and "the server," a reference to a bizarre conspiracy theory alleging that Ukrainians hacked the Democratic National Committee's emails during the 2016 presidential election campaign.

U.S. intelligence agencies and Special Counsel Robert Mueller have concluded that Russian operatives hacked those emails as part of an attempt to hurt Hillary Clinton's candidacy and benefit Trump. But because Trump does not like the implications of that conclusion, he is fixated on an alternative explanation: Ukrainians did it and framed the Russians in an attempt to hurt his candidacy and benefit Clinton. Although there is no evidence to support that theory, it appeals to Trump's vanity and his outrage at the idea that Russia helped him win the election. Its relevance to legitimate U.S. national security interests is harder to see.

The second part of the favor Trump asks from Zelenskiy is related to the dubious allegation that former Vice President Joe Biden, a leading contender to oppose Trump in the 2020 election, pressed the Ukrainian government to replace Prosecutor General Viktor Shokin with the aim of thwarting an investigation of Burisma, an energy company that employed Biden's son Hunter as a board member from 2014 to 2019. Trump calls Shokin, who was widely criticized as corrupt, "a very good prosecutor" and describes his ouster as "very unfair." He asks Zelenskiy to confer with Rudy Giuliani, Trump's personal lawyer, and Attorney General William Barr about the Bidens' alleged misconduct, which he says "sounds horrible to me."

Here, too, Trump's personal motive in seeking to discredit Biden is obvious, while the legitimate public interest is harder to discern. It was no secret that Giuliani, acting as Trump's representative, had been encouraging the Ukrainian government to investigate the Bidens. As Giuliani explained last May, he was seeking "information [that] will be very, very helpful to my client, and may turn out to be helpful to my government." Responding to criticism of his lobbying, Giuliani said "there's nothing illegal about it," although "somebody could say it's improper."

Yes, somebody could. Likewise, somebody could say it was improper when the president of the United States pressured the government of a country desperate for U.S. military aid to cooperate with his personal lawyer in digging up dirt on a political opponent. The idea that Trump was simply concerned about the general issue of official corruption in Ukraine—a subject he does not broach during his conversation with Zelenskiy—seems highly implausible when you read the transcript. Last month Trump himself said what he wanted from Zelenskiy was "very simple": "a major investigation into the Bidens."

In addition to the strong circumstantial evidence contained in that conversation, which alarmed several administration officials who listened in on the call, the following points have emerged from the impeachment investigation:

• Gordon Sondland, the U.S. ambassador to the European Union, testified that there was a clear "quid pro quo" between the Ukrainian investigations sought by Trump and a White House meeting with Zelenskiy. "Everyone was in the loop," he said. "It was no secret." In cooperating with Giuliani to obtain a public commitment from the Ukrainian government to conduct the investigations, Sondland said, "I followed the directions of the president."

• Although Sondland initially said he was not aware of a connection between the investigations and the freeze that the Trump administration imposed on $391 million in congressionally approved military aid to Ukraine, he later revised his account in light of other officials' testimony. This week he said that he was "absolutely convinced" the aid would not be delivered without the public commitment Trump sought and that he communicated as much to a Zelenskiy adviser on September 1.

• Deputy Assistant Secretary of Defense Laura Cooper testified that the connection between the aid and the investigations "was stated very clearly" at a meeting the day after Trump talked to Zelenskiy. She said Pentagon officials worried that the freeze, which Trump ultimately lifted under congressional pressure, was illegal. And although Zelenskiy himself was not aware of the aid freeze at the time of his July 25 conversation with Trump, she said, other Ukrainian officials were already asking about it.

• William Taylor, the U.S. chargé d'affaires in Ukraine, testified that both the aid and the White House meeting were contingent on the investigations. Taylor described the demands as contrary to U.S. interests, saying, "It's crazy to withhold security assistance for help with a political campaign."

• Lt. Col. Alexander Vindman, director for European affairs at the National Security Council (NSC), expressed similar concerns. "It is improper for the president of the United States to demand a foreign government investigate a U.S. citizen and political opponent," he said. "It was also clear that if Ukraine pursued an investigation into the 2016 election, the Bidens, and Burisma, it would be interpreted as a partisan play."

• Jennifer Williams, a foreign policy adviser to Vice President Mike Pence, likewise testified that the favor Trump wanted from Zelenskiy was "unusual" because "it involved discussion of what appeared to be a domestic political matter."

• Kurt Volker, the former special envoy to Ukraine, said Trump's charge that Biden had corruptly interfered with the Burisma investigation was "not credible" in light of bipartisan concerns about Shokin, whose removal was consistent with U.S. foreign policy.

• Fiona Hill, a former NSC Russia specialist, described the claim of Ukrainian hacking as "a fictional narrative that has been perpetrated and propagated by the Russian security services themselves."

• "POTUS wanted nothing less than President Zelenskiy to go to [a] microphone and say investigations, Biden, and Clinton," Deputy Assistant Secretary of State George Kent testified. "I had concerns that there was an effort to initiate politically motivated prosecutions that were injurious to the rule of law."

Does all this amount to proof beyond a reasonable doubt that Trump is guilty of illegally extorting Zelenskiy (or, alternatively, soliciting a bribe from him in exchange for an official act)? No, but that standard of proof does not apply to impeachment, which in any case does not require a criminal act.

The picture could be clarified by testimony from unwilling witnesses such as Giuliani, former National Security Adviser John Bolton, Secretary of State Mike Pompeo, and acting White House Chief of Staff Mick Mulvaney, who also directs the Office of Management and Budget. But even without that testimony, I'd say there is clear and convincing evidence that Trump abused his official powers in the service of his personal interests and that he has repeatedly lied about it since that abuse came to light.

Clinton also lied, and he did so under oath. That is no small thing, especially since it seemed to reflect a belief that he was above the law. Furthermore, the subject that he lied about, his sexual relationship with a White House intern, was itself a troubling abuse of power. But that abuse did not involve U.S. foreign policy, and it did not impinge on the separation of powers by obstructing the delivery of congressionally appropriated funds. It is hard to see how people who thought Clinton's conduct was impeachable could believe Trump's is not, unless they are blinded by unconditional partisan allegiance.

Whether it is prudent to impeach Trump with less than a year to go before he faces re-election is another matter. But Democrats already seem to have made up their minds about that, and they will have to live with the consequences.