Reminder: Jeff Sessions Is a Drug War Dinosaur and Should Be Nowhere Near Government Power 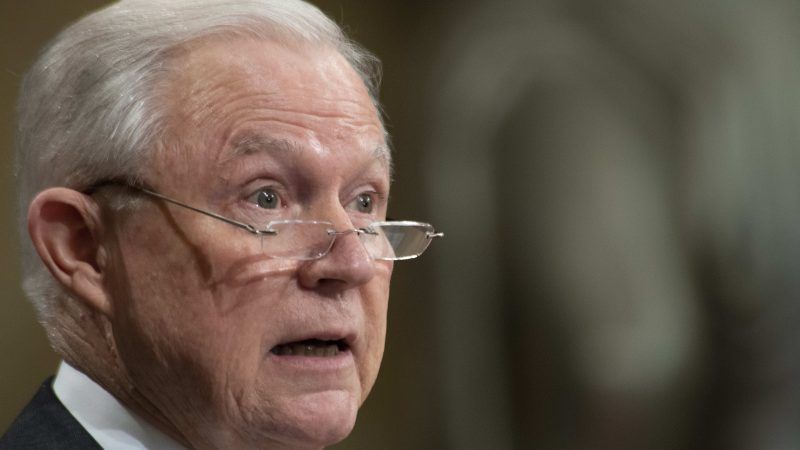 Jeff Sessions, former senator and former U.S. attorney general, announced yesterday that he will run to reclaim his old Alabama Senate seat. That's as good an opportunity as any to remind everyone why Sessions should be nowhere near government power.

As I wrote in a 2017 profile, the Alabama Republican is a drug war dinosaur, a diehard believer in "broken windows" theory with a childishly Manichean view of policing, wandering around in a world that has largely passed him by.

Before Donald Trump canned him, one of Sessions's last acts as attorney general was a memo making it harder for the Justice Department's Civil Rights Division to enter into so-called "consent decrees" with cities plagued by unconstitutional policing.

Sessions was one of the most vocal critics of the Obama administration's use of consent decrees to rein in rotten police departments, saying they "undermine the respect for police officers and create an impression that the entire department is not doing their work consistent with fidelity to law and fairness." He was an unwavering subscriber to the "bad apple" explanation for police misconduct, and he outright rejected the possibility that—brace yourself for this, gentle readers—some police departments might incentivize bad policing and shield problem cops from scrutiny.

Sessions admitted he didn't even read the Justice Department's report on unconstitutional policing in Chicago and in Ferguson, Missouri, which is interesting because he also called the reports "pretty anecdotal and not so scientifically based."

It was an echo of one of Sessions's first major moves as attorney general: He rolled back a 2013 directive by former Attorney General Eric Holder that instructed U.S. attorneys to avoid charges in certain low-level drug cases that would trigger lengthy mandatory minimum sentences. It is prosecutors' duty to seek the maximum sentences on the books, Sessions argued.

He went on to blame Holder's 2013 "smart on crime" initiative for a national rise in crime in 2015 and 2016, a claim that was absurd on its face. Holder's memo may have led to shorter sentences for only around 500 federal drug offenders each year.

Sessions also rolled back an Obama-era Justice Department guidance on civil asset forfeiture that restricted when federal authorities could "adopt" local cases. Such adoptions are one of the primary ways state and local police get around stricter state laws on civil asset forfeiture, which allows police to seize property suspected of being connected to criminal activity even when the owner is not charged with a crime.

There was no criminal justice reform measure modest enough to escape Sessions' ire. He also opposed the FIRST STEP Act, a sentencing reform bill passed late last year with overwhelming Republican support. The act has resulted in the early release of thousands of federal drug offenders who had been serving draconian crack cocaine sentences. Sessions was reportedly among the faction that lobbied Trump, unsuccessfully, to oppose the bill.

Sessions' influence is still being felt. The Washington Post reported today that federal prosecutors have tried to block hundreds of inmates from being released under the FIRST STEP Act's provisions by mangling Congress's intent and arguing that many offenders don't qualify.

As a senator, Sessions was one of the staunchest supporters of mandatory minimum sentences and harsh drug laws—long after many of his GOP colleagues began to question the wisdom of, say, putting a woman with no history of violent crime in federal prison for life for a third drug offense. (That's not a hypothetical. I interviewed a woman who was sentenced to life for trading several bottles of pseudoephedrine to a meth dealer. Her two previous offenses were minor drug crimes that never resulted in prison time. Sessions would prefer that she were still rotting in prison.)

His preference for harsh sentencing laws is closely tied to his drug war hysteria. Who could forget his claims that using marijuana was "only slightly less awful" than using heroin? Or his erroneous assertion that opioid addiction often starts with marijuana use, despite several studies to the contrary? As attorney general, he rescinded the Obama administration's memo instructing federal prosecutors not to go after low-level marijuana offenders in states that have legalized the drug, and he worked to sabotage medical marijuana research. "Good people don't smoke marijuana," he once declared.

In a 2015 Senate Judiciary Committee hearing, after listening to speaker after speaker trot out a parade of horror stories about civil asset forfeiture, Sessions declared that 95 percent of forfeiture cases involve people "who have done nothing in their lives but sell dope."

Trump hates Sessions for all the wrong reasons. But if the president torpedoes his Senate ambitions and stops him from gumming up criminal justice reform with his unfounded nonsense, that could certainly be considered a first step toward making America great again.