The Attorney General Is Determined to Undermine Your Privacy

The encryption limits that the Justice Department demands in the name of security would make all of us less secure. 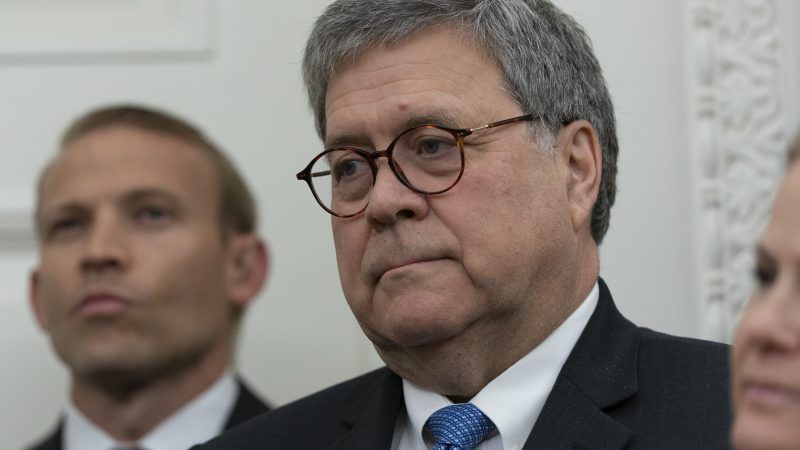 The Department of Justice claims to support "strong encryption, which is used by billions of people every day for services such as banking, commerce, and communications." Yet the department is actively working to weaken encryption, lest fully secure communications frustrate law enforcement agencies seeking access to possibly incriminating messages—a problem it calls "going dark."

Long before the government faced the "going dark" challenge, it faced the "going mobile" challenge posed by gasoline-powered vehicles, which Attorney General William Barr thinks offers an instructive analogy. He is right, but not for the reasons he suggests. The legal treatment of automobiles actually casts doubt on the Justice Department's insistence that the world be arranged to facilitate criminal investigations.

In a 1925 case involving enforcement of alcohol prohibition, the Supreme Court announced an exception to the Fourth Amendment's warrant requirement. Because illicit booze transported by motorized vehicles might be whisked away and hidden or destroyed before police could obtain judicial approval for a search, the Court said, the Fourth Amendment allows warrantless searches of automobiles as long as there is "probable cause" to believe they contain contraband.

Justice James Clark McReynolds dissented. "If an officer, upon mere suspicion of a misdemeanor, may stop one on the public highway, take articles away from him and thereafter use them as evidence to convict him of crime," he wondered, "what becomes of the Fourth and Fifth Amendments?"

Nowadays, when electronic warrants can be readily obtained in a matter of minutes, McReynolds' objection is stronger than ever. Although police can no longer plausibly claim that they do not have time to get a warrant before searching a lawfully stopped vehicle, the automobile exception that the Court carved out nearly a century ago continues to relieve them of that requirement.

In any case, notwithstanding the fact that automobiles facilitate all manner of crimes, the government has never tried to ban them for that reason. Yet that is what Barr and his allies are threatening to do with "end-to-end" encryption, which makes electronic messages indecipherable to anyone but the sender and the recipient.

Such technology is obviously useful to people who value their privacy, including journalists, lawyers, dissidents, and ordinary citizens discussing sensitive matters. It provides protection not only against the prying eyes of governments, many of which are unconstrained by concerns about civil liberties and the rule of law, but against hackers, con men, blackmailers, and other private-sector malefactors.

But because end-to-end encryption also is useful to criminals, Barr argues, it cannot be tolerated. Barr recently urged Facebook CEO Mark Zuckerberg to reconsider plans to include end-to-end encryption, which is already incorporated into the company's highly popular WhatsApp platform, in its other messaging services.

"Companies should not deliberately design their systems to preclude any form of access to content, even for preventing or investigating the most serious crimes," Barr wrote in an open letter to Zuckerberg. Such privacy-protecting innovation, he said, "puts our citizens and societies at risk."

For the time being, Barr is limiting his anti-privacy efforts to exhortation. But in a speech last July, he warned that "legislative and regulatory solutions" may be necessary if tech companies are not sufficiently cooperative.

Technically savvy privacy advocates have long argued that "back doors" allowing government access to encrypted communications inevitably create vulnerabilities that bad actors can exploit. Barr disputes that claim without proposing any specific solutions to the problem, merely suggesting that it can be licked if only companies like Facebook think hard enough about the challenge.

Even if you share Barr's vague confidence, it's undeniable that the access he demands for the U.S. government will also be demanded by governments with far worse human rights records, jeopardizing people who dare to think for themselves in countries that do not respect such freedom. The compromises he seeks in the name of "security," on behalf of "the public," would make the public less secure by denying them the privacy-protecting tools they manifestly want.