A safe place meant to help prevent overdose deaths is not the same as a crackhouse. 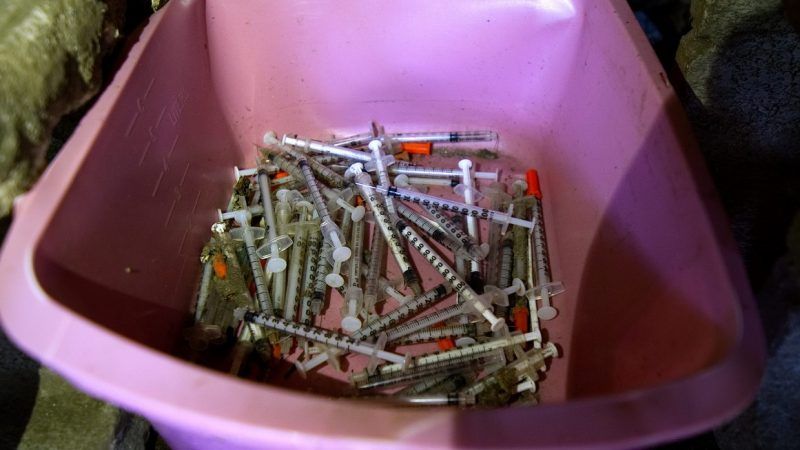 A bucket of syringes from an outdoor encampment of heroin users in the Kensington section of Philadelphia. (Bastiaan Slabbers/ZUMA Press/Newscom)

A site where trained medical professionals keep watch over drug users in order to prevent overdoses is not the same thing as a drug den, and it's not a violation of federal drug laws if Philadelphia allows one to open, a federal judge ruled Wednesday.

Several American cities have been planning to allow such safe injection facilities (SIFs), hoping to fight opioid overdose deaths, reduce the spread of HIV, and get poor and homeless drug users off the streets. This ruling is a major development, but the fight is far from over. The Department of Justice simply does not want to let cities experiment with this sort of harm reduction method.

Philadelphia officials gave their approval in 2018 for the creation and operation of an independent, nonprofit, donor-funded SIF named Safehouse. It would operate in Kensington, a neighborhood struggling with public drug use and opioid-related deaths, often due to heroin tainted with fentanyl. At Safehouse, people who are addicted to drugs could shoot up in a clean environment under the watch of medical professionals who can assist in the event of an overdose—and provide information about resources to help people fight their addictions. (Safehouse won't be providing the actual drugs.)

Several countries, including Canada, have allowed SIFs as a harm reduction measure. The U.S. has not, because the feds' drug war mentality, focused on prohibition and punishment, has little room for alternative solutions.

His plan appears to have backfired. Instead, U.S District Judge Gerald Austin McHugh ruled that a SIF is not the same as a drug den and its operation does not violate federal law.

Section 856 of the CSA makes it a federal crime to open, lease, or manage a facility "for the purpose of manufacturing, distributing, or using any controlled substance." Those who violate this part of the law face a prison sentence of up to 20 years and fines of up to $500,000. After considering this wording, McHugh ruled that Congress had not contemplated the creation of SIFs when it passed the law in 1986 or amended it in 2003. He decided that "there is no support for the view that Congress intended to criminalize projects such as those proposed by Safehouse," because at the time, nobody was talking about the use of SIFs to reduce harms of opioid addictions.

A good chunk of the 56-page decision is a dense attempt to parse the meanings of individual words within the law itself, given that the two sides disagree one what it means to operate a facility for the "purpose" of using a controlled substance. After analyzing the lengthy history of the law's creation and lawmakers' justification for it, McHugh concludes that the law was meant to apply to facilities operated by illegal drug manufacturers and dealers and to shut down drug-filled raves and parties, not to stop sites run by trained medical staff intended to keep users from hurting themselves.

McHugh ultimately determines that Safehouse does not intend to facilitate drug use and is therefore not forbidden by Section 856:

I cannot conclude that Safehouse has, as a significant purpose, the objective of facilitating drug use. Safehouse has plans to make a place available for the purpose of reducing the harm of drug use, administering medical care encouraging drug treatment, and connecting participants with social services. None of these purposes can be understood as a purpose to facilitate drug use.

McHugh flat out rejects the U.S. attorney's argument that because Congress did not specifically authorize SIFs, they are therefore forbidden. The judge notes that "the law does not default to criminalization, requiring Congress to clarify when it wishes not to incarcerate citizens." Essentially, McHugh states that it is up to Congress, not the Justice Department and not the judicial branch, to clarify the law if it wants to ban SIFs. In the meantime, he rejected McSwain's request for a declaratory judgment against Safehouse and Philadelphia.

This is just the first salvo in what's probably going to be a lengthy legal struggle. McSwain immediately promised to appeal the ruling, and U.S. Deputy Attorney General Jeffrey Rosen put out a statement warning that "Any attempt to open illicit drug injection sites in other jurisdictions while this case is pending will continue to be met with immediate action by the Department."

Even if the judge's decision survives these appeals, the only people protected from arrest will be the ones operating Safehouse. The people who go these to inject drugs would still be at risk of arrest and prosecution. Unlike local police, the Drug Enforcement Administration and the Justice Department do not typically raid, arrest, and prosecute people who are merely drug users and not dealers. But it's easy to imagine them wanting to make an example out of anybody who attempts to make use of Safehouse's services.