Conservatives who argue that the video platform is constrained by the First Amendment are forsaking their constitutional principles. 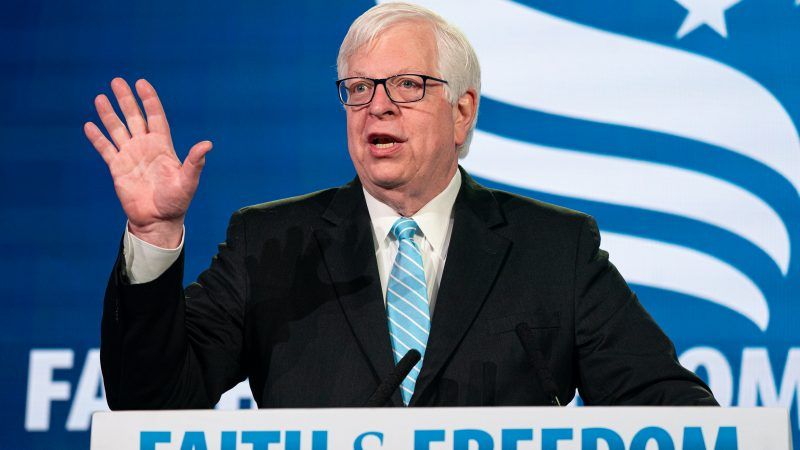 Dennis Prager may or may not have a legitimate beef with YouTube, which he says has been restricting access to videos produced by his nonprofit organization, Prager University, because of its conservative perspective. But one thing is clear: YouTube is not violating the First Amendment, and the political commentator's claims to the contrary are anything but conservative.

During a hearing last week before the U.S. Court of Appeals for the 9th Circuit, the two members of the three-judge panel who spoke were understandably skeptical of PragerU's argument that YouTube's decisions about which videos should be accessible in "restricted" mode implicate the First Amendment. The reason for that skepticism is obvious: The First Amendment is a constraint on government, not on private publishers, no matter how successful or influential they are.

"If your representations are correct, it seems deeply disturbing that they've put your stuff in the restricted area," said Judge Jay Bybee, a George W. Bush appointee. "I'm not sure that creates a First Amendment issue."

Judge M. Margaret McKeown, a Clinton appointee, seemed equally unimpressed by PragerU's argument. YouTube is "a public forum in a colloquial sense," she said. "But does that necessarily mean that they're a First Amendment public forum?"

It does not, since a "public forum" in the constitutional sense requires government action, as U.S. District Judge Lucy Koh recognized last year when she dismissed PragerU's lawsuit against YouTube and Google, which owns the video platform. Just as Prager's organization, notwithstanding its name, is not really a university, the fact that YouTube promotes itself as a viewpoint-neutral platform for a wide variety of perspectives does not make it a "public forum" under the First Amendment.

Koh rejected PragerU's reliance on Marsh v. Alabama, a 1946 case in which the Supreme Court held that Chickasaw, a Mobile suburb owned and controlled by the Gulf Shipbuilding Corporation, violated the First Amendment when it banned Jehovah's Witnesses from distributing religious literature on a sidewalk near the post office. That decision hinged on the fact that Gulf Shipbuilding was acting in all respects like a local government, performing functions that ordinarily would be reserved to the state.

"Unlike the private corporation in Marsh," Koh observed, "Defendants do not own all the property and control all aspects and municipal functions of an entire town. Far from it, Defendants merely regulate content that is uploaded on a video-sharing website that they created as part of a private enterprise."

PragerU's lawyer, Peter Obstler, nevertheless urged the 9th Circuit to accept the analogy. YouTube is "not just a company town," he said. "They're arguably a company country and maybe a company world force."

In the end, however, Obstler's argument came down to YouTube's self-presentation. If YouTube admits that political considerations influence its filtering decisions, he said, "the problem goes away."

Google's lawyer, Brian Willen, noted that "the First Amendment isn't a switch that gets turned on or off based on how a private business describes itself." And if PragerU's position were accepted, he said, the result would be a "much more clamped-down and closed internet," since platforms like YouTube would have "powerful incentives" to abandon any aspiration to ideological neutrality.

Presumably that is not an outcome PragerU would welcome. But at least as troubling as the practical implications of the organization's argument is its result-oriented approach to constitutional interpretation—the sort of loosey-goosey reasoning that conservatives like Dennis Prager have long condemned when it's employed by advocates on the left.

Conservatives may be tempted to embrace Prager's argument in the hope of a short-term victory for their side. But they should first reflect on the long-term costs of forsaking their constitutional principles.