How Would Trump's Payroll Tax Cut Work? Glad You Asked!

The details are reeeaaaaaally sketchy, but here's what we know now. 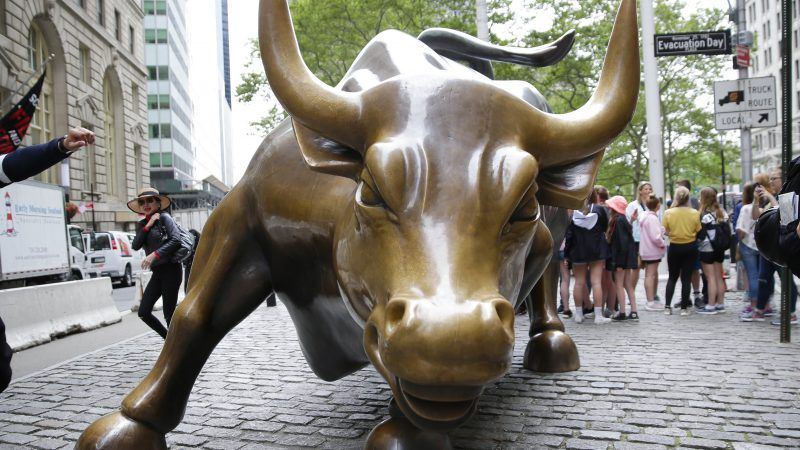 The Trump administration is reportedly considering a payroll tax cut as a way to boost the economy and stave off a possible recession.

Well, maybe. Trump has apparently kicked around the idea of cutting payroll taxes. The idea caught enough media attention for the White House's press office to officially deny the reports that the administration was considering such a move—until Trump himself confirmed that, yes, actually a payroll tax cut is under consideration.

Any changes to the payroll taxes paid by American workers and employers would have to be approved by Congress. So once the White House decides what it actually wants to do, we are still a long way from that proposal becoming law.

Still, payroll taxes are a little-discussed but critical part of Americans' fiscal relationship to the federal government. Because they are used to fund the so-called "mandatory spending" on entitlement programs, a payroll tax cut would let American workers put more money in their pockets now in exchange for putting Social Security and Medicare on even shakier fiscal footing. Unless they are combined with entitlement reforms—or unless the lost revenue is backfilled in some other way—a payroll tax cut is likely to trade a short-term economic boost for making America's long-term fiscal issues worse.

Why? Glad you asked. Here's a quick primer on everything you want to know about payroll taxes but might have been afraid to ask:

How do payroll taxes work and what are they used for?

Payroll taxes are taxes on wages. Under current law, both employees and employers are subject to a 7.65 percent tax on every dollar earned up to $132,900 annually.

Unlike other taxes collected by the federal government—which go into a general revenue bucket to be spent on everything from building new hotels in Kabul, Afghanistan, to feeding cocaine to Japanese quail—payroll taxes are tied to specific mandatory programs and run "off-budget."

The two biggest programs funded by payroll taxes are Social Security and Medicare, the government-run health care program for the elderly. (Medicaid, the government-run health care program for the poor, is funded jointly by state and federal taxes.) That 7.65 percent tax on workers and employers is actually two taxes: a 6.2 percent tax to fund Social Security and a 1.45 percent tax to fund Medicare. The Social Security tax only applies to the first $132,900 earned this year—the cap is gradually increasing—but the Medicare portion of the tax is uncapped and applies to all earnings.

There are a few other payroll taxes. One is paid by employers on the first $7,000 earned by all employees and is used to subsidize state-run unemployment insurance programs. Others fund pensions for railroad employees and federal workers—but you don't pay those unless you work for a railroad or the federal government. For the purposes of this post, we'll ignore them.

OK, so cutting those taxes means I get to take home more money?

Probably. But the answer depends on whether Trump is considering cutting the employer or employee half of the payroll tax.

A cut to the employee's half of the payroll tax would indeed mean more take-home pay for workers. Exactly how much more would depend on the details of the plan, which we don't have yet. The Committee for a Responsible Federal Budget, a nonpartisan nonprofit that favors balanced budgets, estimates that a reduction in the employee's payroll tax would result in a reduction of government revenues of about $75 billion per percent cut per year.

In other words, if Trump were to enact a 2 percent cut that would last for two years, it would put $300 billion in American workers' bank accounts that otherwise would have gone to the federal government.

A cut to the employer's half of the payroll tax would reduce federal revenues by about $60 billion per percent cut per year, according to the CRFB's analysis (which is based on estimates from the Congressional Budget Office and Joint Committee on Taxation). The "cost" of that cut is less because it is assumed that the cut would translate into higher wages for employees—higher wages that would be subject to employee-side payroll taxes, thus capturing some of lost revenue.

Why is Trump considering this tax cut now?

Mostly for political reasons. There is growing concern about a possible recession on the horizon—one that might be triggered, or worsened, by the president's trade policies. If there is a recession in the next year, it would seriously complicate Trump's re-election effort. Still, unemployment remains near all-time lows and consumer spending is high, even though the trade war has whacked manufacturing and forced businesses to cut back on investments. With the boost from the 2017 tax cuts fading, Trump probably sees another tax cut as a good way to reinvigorate in the short-term growth.

He did. Much like how the White House press office tried to squash the story that Trump was considering a payroll tax cut only to have the president contradict those claims hours later, there have been mixed messages about recession fears. On Sunday, Kudlow told Fox News there was "no recession in sight." On Tuesday, White House chief of staff Mick Mulvaney told a gathering of Republican donors that the administration was preparing for a "moderate and short" recession.

So the official position of the White House seems to be that a recession isn't coming and that it will be a small one when it arrives.

I'm sorry I asked. More importantly, will a payroll tax cut prevent that recession that is or is not coming?

Probably nothing can prevent recessions forever, but Trump is likely right about the fact that a payroll tax cut would boost growth. When the Obama administration cut the employee-side payroll tax by 2 percent in 2010 and 2011, the Congressional Budget Office projected that it would boost the economy by between $90 billion and $270 billion over five years.

That tax cut lasted only two years, in large part because Republicans opposed extending it in 2012.

Political ironies aside, what's the downside here? More money in my pocket and a much-needed jolt to the economy sounds pretty good.

The downside is the fact that America is already in a massive fiscal hole—the Congressional Budget Office now expects a $960 billion deficit this year—and a tax cut that isn't paid for with spending cuts will only maybe that problem worse.

Even without reducing the revenues that pay for it, Social Security is expected to hit insolvency—the point at which full benefits can no longer be paid—in the mid-2030s. Medicare Part A, which covers hospital and nursing home costs, will be in the same boat as early as 2026. (The programs' trustees expect that Medicare Part B, which covers routine medical care such as visits to the doctor, and Medicare Part D, which covers prescription drugs, are on more solid footing and will remain solvent "indefinitely.")

Those coming shortfalls are a big part of America's long-term fiscal problems. Over the next 30 years, Social Security and Medicare are expected to run a $100 trillion deficit, while the rest of the federal budget is going to run a $16 trillion surplus, according to the Manhattan Institute's Brian Riedl, a former chief economist to Sen. Rob Portman (R–Ohio).

One idea frequently floated as a way to get the national debt under control is to raise payroll taxes. Usually this takes the form of suggesting that the current cap on the Social Security payroll tax be upped or eliminated. But even that would not be enough to plug the long-term gap.

Unless Trump is going to shift general revenues to fill the gap created by his proposed payroll tax cut, this policy will make America's entitlement crisis more immediate and more difficult to solve.

So, basically, our elected officials are going to have to decide whether a short-term boost to the economy to help Trump avoid a recession and aid his chances of winning re-election is worth making the long-term fiscal problems—problems that already seem almost insurmountable—even worse?

Yep. And when it comes to short-term thinking versus long-term planning in Congress, it's almost all one-way traffic.