The presidential hopeful alleges the company violated her First Amendment rights when it suspended her campaign advertising site for 6 hours. 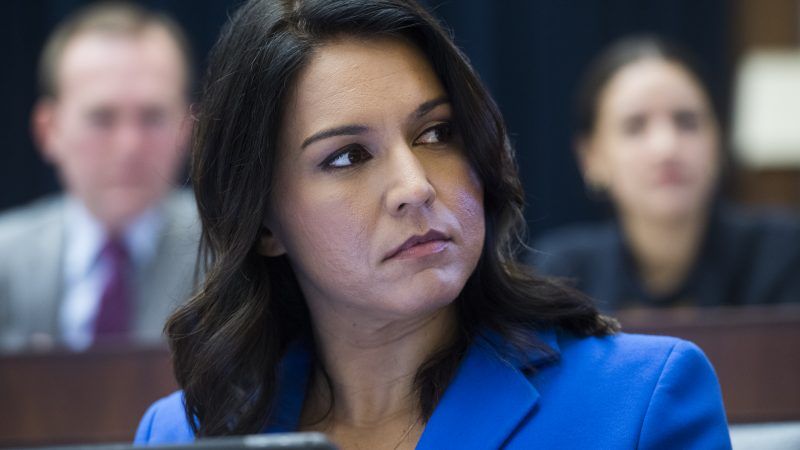 Rep. Tulsi Gabbard (D–Hawaii) took a cue from conservative conspiracists Thursday, when the congresswoman and Democratic presidential hopeful sued Google for $50 million and accused the company of violating her right to free speech. The suit, filed in a federal court in Los Angeles, argues that Google infringed on the First Amendment when it suspended her campaign advertising site for six hours, briefly impeding her ability to raise money right after a well-received debate performance.

Many people on the right have recently made social media companies Public Enemy No. 1, claiming that they discriminate against conservative points of view. Ironically, Gabbard's suit throws some cold water on the accusations coming from her Republican counterparts, casting doubt on the idea that Google and its subsidiaries are systematically ostracizing Wrongthink along party lines.

"Google's discriminatory actions against my campaign are reflective of how dangerous their complete dominance over internet search is, and how the increasing dominance of big tech companies over our public discourse threatens our core American values," Gabbard said in a statement. "This is a threat to free speech, fair elections, and to our democracy, and I intend to fight back on behalf of all Americans."

Similar contentions were most recently placed under the spotlight during a Senate hearing last week on Google censorship. Dennis Prager, the conservative radio host and the hearing's star witness, lamented YouTube's decision to restrict about 20 percent of his videos, meaning they are invisible to the 1.5 percent of viewers who opt not to see mature content. Prager claimed that YouTube—a Google subsidiary—had targeted his video-making nonprofit PragerU because of a corporate bias against conservatives, notwithstanding the fact that the tech giant restricts much larger portions of content from various liberal organizations.

"I promise you, one day you will say, first they came after conservatives, and I said nothing," said Prager, referencing Martin Niemöller's famous poem. "And then they came after me—and there was no one left to speak up for me." It's a puzzling claim, considering that the remaining 98.5 percent of YouTube's 1.3 billion users can still engage with all of his videos.

Although Gabbard and Prager's recent gripes center on Google, the social media sphere in general has been a rife target for censorship claims. In a similar hearing in April, Sen. Marsha Blackburn (R–Tenn.) said that social media was the new "town square"—one that requires a sheriff (see: the federal government) for proper policing. She cited Twitter's brief removal of her Senate campaign announcement video in 2017; although it was reinstated soon after, she chalked the debacle up to anti-conservative bias in big tech.

In another sign that this isn't a Republican-specific phenomenon, a near-identical scenario struck Sen. Elizabeth Warren (D–Mass.) on Facebook. The platform recently removed an ad for Warren's presidential campaign for violating its terms of service.

While conservatives seem to be somewhat unified in their skepticism of social media, Democrats as a whole will likely be harder to convince, as many have spent ample amounts of time refuting such claims from the right. Sen. Mazie Hirono (D–Hawaii), for one, said in last week's tech hearing that the bias bickering is "baseless."

Many of these companies have been obnoxiously opaque about their business practices, leaving users to play guessing games about why certain bits of content have been removed. That lack of transparency, and their sometimes over-aggressive content regulation, has opened a wide gate for complainers to make assumptions about what's going on. Hence the charges of politically motivated bias.

Gabbard likely stands no chance in court. But, if anything, her lawsuit provides an excellent example of the perpetual misunderstanding surrounding what constitutes protected speech, and what does not. While the First Amendment certainly shields Gabbard, Prager, and everyone else from government censorship or retaliation based on words alone, it does not mean Google, Facebook, or Twitter cannot remove content. They are private companies, and, as such, they can choose to disassociate if something doesn't align with their values—an argument that, until recently, resonated with conservatives.

Google denies any such bias. "In this case, our system triggered a suspension and the account was reinstated shortly thereafter," Jose Castanada tells The New York Times, explaining that an automated system works to prevent potential fraud by flagging accounts with large spending changes. "We are proud to offer ad products that help campaigns connect directly with voters, and we do so without bias toward any party or political ideology."

If her suit is any proof, that answer did not satisfy Gabbard, who has now joined hands with her conservative colleagues in decrying tech "censorship." Who said bipartisanship was dead?