Judges would be permitted to rethink sentences after 10 years have been served, particularly for inmates over the age of 50. 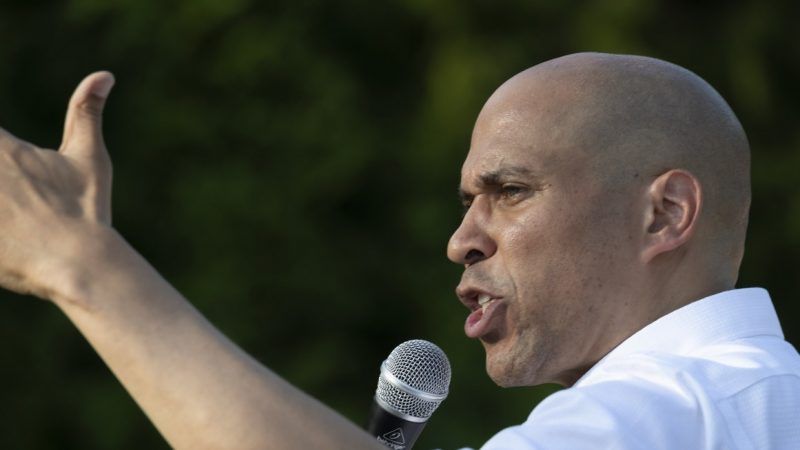 Sen. Cory Booker (D–N.J.) is introducing new legislation that he hopes will follow the FIRST STEP Act by allowing for more sentence reductions and more releases for federal inmates who have served at least 10 years behind bars.

Co-sponsored in the House by Rep. Karen Bass (D–Calif.), the Second Look Act would give federal judges the ability to review an inmate's sentence after he or she has served 10 years in federal prison. Judges will get the opportunity to look over the inmate's behavior, consider input from federal prosecutors, and determine whether the inmate remains a risk to the public. Upon considering that information, the judge would be able to reduce a prisoner's sentence. People freed early under the Second Look Act would be put on supervised release for up to five years. In essence, Booker's law would restore a version of parole to the federal criminal justice system, which Congress abolished with the passage of the Sentencing Reform Act of 1984.

Inmates older than 50 who have served at least 10 years in federal prison would benefit from a rebuttable presumption in favor of their release. That means to prevent their release, federal prosecutors will have to show why these older convicts are dangerous and should not have their sentences reduced.

The Second Look Act contains an even bigger package of reforms than the FIRST STEP Act. It would essentially eliminate mandatory minimum sentences longer than 10 years by allowing federal judges to resentence prisoners who have served at least that long. It would also eliminate automatic life sentences in federal prison. In neither type of case would judges be required to resentence, only given the option. Considering the increasingly advanced age of the federal prison population, these reforms would likely allow thousands of prisoners who were given draconian sentences in their youth to return to their families and finish their lives as free men and women.

The Second Look Act would also address another ongoing problem, which is that sentencing reforms are not always made "retroactive." When Congress determined in 2010 that the sentencing disparity between equivalent weights of crack cocaine and powder cocaine was injust, it reduced the sentence lengths for crack cocaine to more closely resemble sentences for powder cocaine. But Congress did not create a mechanism by why prisoners sentenced before the 2010 reforms were signed into law could be resentenced under the new law. In response, President Barack Obama controversially commuted several thousand sentences to help crack offenders sentenced in the decades before the 2010 reforms. It wasn't until President Donald Trump signed the FIRST STEP Act into law that crack sentencing changes were made retroactive and prisoners had an avenue to pursue resentencing.

This is a good bill that has unfortunately roused the ire of America's dumb-on-crime wing.

Originally, the bill was named the Matthew Charles and William Underwood Second Look Act of 2019, but the names have since been taken off. Charles was the first person released under the FIRST STEP Act, the 2018 law that retroactively reduced the sentences of people in federal prison for crack cocaine-related convictions. He had served 21 years for selling crack to a police informant. No one has pointed to Charles as a case for why we need to keep our sentencing laws as they are, but Underwood is a different story.

Currently 65, Underwood has served nearly 30 years of a life sentence for racketeering and drug charges. He was accused of founding and leading a violent drug gang in New York City. Attempting to tie Underwood and Charles together, while downplaying Underwood's record, has prompted conservative pundits like Ann Coulter and Tucker Carlson to bring up Underwood's history to show just how serious the crimes he was sentenced for actually are.

Yet as Sen. Booker has pointed out, Underwood was convicted in the 1980s. If Underwood was convicted today of those exact same charges, he would likely receive a lesser sentence due to changes in sentencing laws. Underwood's clemency attorney, Nkechi Taifa, explained to Reason that Underwood's 30-year sentence actually covered the most serious components of the gang conspiracy charges. She says it was a judge who imposed the life sentence (not a jury) based on some criminal enterprise enhancements that hit right during the time when the government wanted to prove how tough it was willing to fight the drug wars. "If he had been sentenced earlier or later, he wouldn't have gotten life," Taifa says.

The Second Look Act does not guarantee any inmate's freedom. Based on the circumstances, it's possible that Underwood might not even be released under the law named after him.

Both Booker and Underwood's family also point out that he's been a model prisoner with a clean record who regrets his past behavior, and is now a grandfather. And so, given all that time served, is there any reason to keep Underwood behind bars? Is he still a danger to society?

"The question is, 'What is a proportionate sentence?'" Kevin Ring, president of the criminal justice reform nonprofit FAMM, tells Reason. "There has to be a sentence for those who cannot be rehabilitated, and that's not William Underwood. A life sentence has to be reserved for the worst people. … We don't have to make people saints in order to argue that they're human. Here's a person who has served 30 years, and has had no infractions."

The final text of the bill does not appear to be posted yet by Congress. However, FAMM, which supports the bill, provided the text of the House version to Reason. FAMM also has a thorough analysis of what the legislation does and a handy explainer graphic to help understand how it works. As part of the justification, FAMM notes that the United States currently has more than 53,000 people serving federal life sentences without any possibility of parole.