The MORE Act combines laudably broad legalization and expungement provisions with taxes and spending that may alienate potential Republican allies. 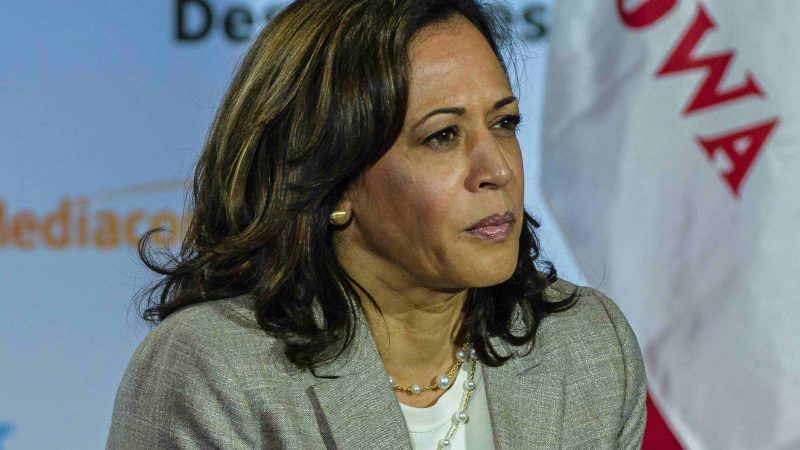 A bill introduced today by Sen. Kamala Harris (D-Calif.) and Rep. Jerrold Nadler (D-N.Y.) would repeal the federal ban on marijuana, expunge the records of people who have been convicted of violating it, and impose a 5 percent sales tax on cannabis products to fund an Opportunity Trust Fund. Well, two out of three ain't bad.

"Times have changed," Harris says. So has Harris, a latecomer to marijuana reform who did not come out in favor of legalization until the beginning of 2018.

But today Harris, perhaps after consulting the latest polls, is confident that "marijuana should not be a crime." Rather, she says, "We need to start regulating marijuana, and expunge marijuana convictions from the records of millions of Americans so they can get on with their lives. As marijuana becomes legal across the country, we must make sure everyone—especially communities of color that have been disproportionately impacted by the War on Drugs—has a real opportunity to participate in this growing industry."

The Harris-Nadler bill is superior to other pieces of marijuana reform legislation in two important respects. It completely deschedules marijuana rather than moving it to a lower schedule or making exceptions to the ban for state-legal conduct, and it seeks to lift the burdens that prohibition has imposed on people caught growing, distributing, or possessing cannabis, a vital project that too often has been treated as an afterthought. But the bill also includes a new tax and new spending intended to promote "racial and economic justice." Those provisions detract from the main purpose of the legislation and will make it harder to attract support from Republicans.

The Marijuana Opportunity Reinvestment and Expungement (MORE) Act would remove cannabis from the schedules of the Controlled Substances Act and make that change retroactive, applying to "any offense committed, case pending, [or] conviction entered…before, on, or after the date of enactment of this Act." It instructs federal courts to expunge records related to marijuana arrests and convictions. People currently serving sentences for marijuana offenses could ask courts to lift those sentences and expunge their records, which the courts "shall" do.

An expunged arrest or conviction would be removed from "each official index or public record," and the beneficiary would be legally authorized to treat the arrest or conviction "as if it never occurred." He would be "immune from any civil or criminal penalties related to perjury, false swearing, or false statements, for a failure to disclose such arrest, conviction, or adjudication." The MORE Act also says cannabis should not be treated as a controlled substance under immigration law, meaning people could not be deported based on marijuana offenses, and bars federal agencies from denying benefits or security clearances based on cannabis consumption.

The MORE Act's expungement provisions are broader than the corresponding language in the bill that one of Harris' rivals for the Democratic presidential nomination, Sen. Cory Booker (N.J.), reintroduced in February. While Booker's Marijuana Justice Act would require expungement of records related to "marijuana use or possession offense[s]," the MORE Act also covers cultivation and distribution. (Booker is a cosponsor of Harris' bill, and so are several other Democratic presidential contenders.) Both bills seem to raise similar constitutional issues, since they require courts to reach particular decisions in closed cases without new motions from either side.

Leaving that point aside, the goal here is important. It is clearly unjust for people to continue paying the long-lasting ancillary penalties associated with an arrest or conviction after legislators, backed by most Americans, decide their actions should not have been treated as crimes in the first place.

"At a point in time when simultaneously one person could have their life ruined in New York for the exact same action that makes someone in California a millionaire, now more than ever we must end the federal prohibition of marijuana," said Justin Strekal, political director at the National Organization for the Reform of Marijuana Laws (NORML). "The Marijuana Opportunity Reinvestment and Expungement Act embodies the need to legalize cannabis and restore the rights of those who have suffered under the cruel and failed policy of criminalization."

Unfortunately, the MORE Act does not stop there. It would create a Cannabis Justice Office within the Department of Justice and charge it with overseeing a Community Reinvestment Grant Program funded by the new marijuana tax. Grants would go to providers of "services for individuals most adversely impacted by the War on Drugs," including job training, reentry services, legal aid, literacy programs, health education programs, "youth recreation or mentoring programs," and "substance use services."

There would also be a Cannabis Opportunity Program for loans to small marijuana businesses "owned and controlled by socially and economically disadvantaged individuals," plus an Equitable Licensing Program for grants to state and local programs that aim to "minimize barriers to cannabis licensing and employment for individuals most adversely impacted by the War on Drugs." Grantees would have to meet several requirements, including "a cannabis licensing board that is reflective of the racial, ethnic, economic, and gender composition of the State or locality."

As Harris emphasizes, marijuana prohibition has had a disproportionate impact on minority groups, which means much of this granting and lending will look a lot like race-based affirmative action. If that does not raise the hackles of potential Republican allies who might otherwise be sympathetic on federalist grounds, tying marijuana reform to a new tax and new spending programs probably will. At a congressional hearing earlier this month, Rep. Matt Gaetz (R-Fla.) plausibly worried that "concerns over how far to go on some of the restorative elements in our policy could divide our movement," with the result that "we don't get anything done." While Gaetz himself has nevertheless signed on as a cosponsor of the MORE Act, so far no other Republican in either house has joined him.

Rather than switching from one marijuana boondoggle (prohibition) to a bunch of new marijuana boondoggles while trying to steer the cannabis industry toward "racial and economic justice," why not just pay reparations directly to individuals who have been hurt by the war on weed? And instead of funding that compensation by taxing cannabis consumers, who are hardly to blame for the injustices inflicted by pot prohibition, why not deduct the money from the existing drug-war budget? That might also provoke Republican opposition, but it least it would make a kind of sense.