One legislator tried to stop them by reenacting an infamously dumb anti-drug ad. It didn't work. 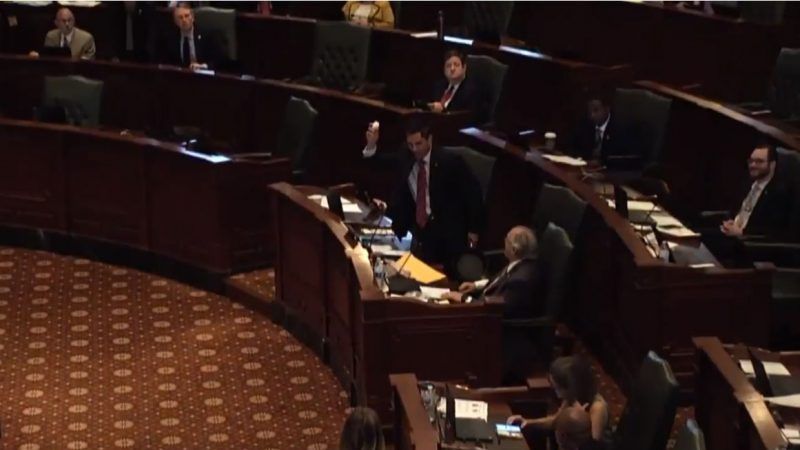 Illinois legislators passed a pot legalization bill on Friday. The legislation allows adults to possess up to 30 grams of recreational marijuana, and it grants clemency for those convicted of lower-level pot-related crimes. The bill is now headed to Gov. J.B. Pritzker, who is expected to sign it.

While the state House was in debate hours earlier, Rep. Anthony DeLuca (D–Chicago Heights) whipped out a pan and an egg in an effort to convince his colleagues to vote against the bill. Cracking the egg open, he compared the scrambled display to someone's brain while under the influence.

State Rep Anthony DeLuca pulls out an egg, a frying pan, and and the old "this is your brain on drugs" argument during debate on the marijuana bill, before urging a no vote. Sponsors argue there is public education piece included in the legislation. pic.twitter.com/C22LsiPsSk

DeLuca is referring to an infamously dumb anti-drug video of the '80s. (If you haven't seen that one, you may have seen the over-the-top follow-up starring Rachael Leigh Cook. No worries, she's since made up for it.)

He also urged colleagues to consider the impact that the bill will have on black and Latino communities. OK: Though white people have similar usage rates and higher rates of drug dealing, blacks and Latinos are far more likely to be searched, arrested, and receive harsh mandatory minimum sentences for drug crimes. Sounds like a good reason for those communities to support reform.

Even though a majority of Americans support legalization, a vocal remainder that can't help but accept the anti-drug tactics of the 1980s as gospel. Think of President Donald Trump's suggestion that "really tough, really big, really great advertising" could prevent kids from using drugs. Hey, that sounds familiar!

Drug hysteria has long permeated the culture. But as more people understand how the drug war has created a harsher criminal justice system and a larger prison population, the legalization side has gotten stronger, at least when it comes to marijuana.

Fearmongering is so Reagan-era, but we advise you heed the following warning the next time a politician tries to use scare tactics to stop a long overdue reform: