A Sniff by a Pot-Detecting Dog Requires Probable Cause and Does Not Justify a Search, Says Colorado Supreme Court 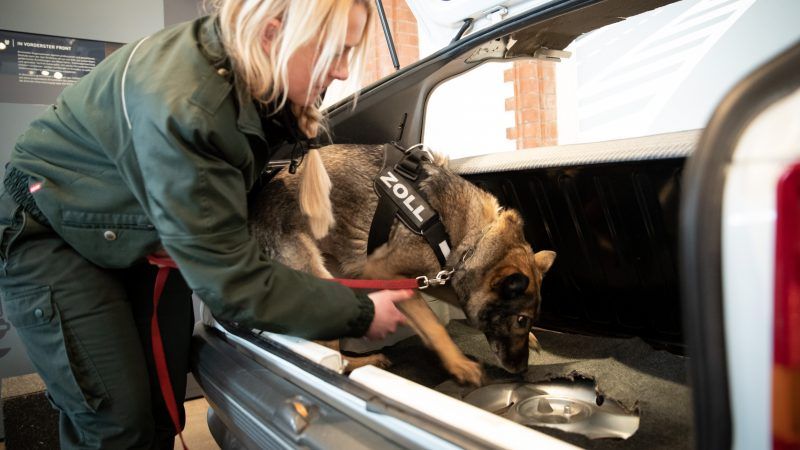 Drug-sniffing dogs in states that have legalized marijuana should be worried about their job security in light of a decision that the Colorado Supreme Court issued yesterday. Confirming the 2017 judgment of a state appeals court, the justices said an alert by a dog trained to detect marijuana as well as other drugs no longer provides probable cause for a search in Colorado, where possessing an ounce or less of cannabis has been legal for adults 21 or older since 2012. Furthermore, the court ruled in Colorado v. McKnight, deploying such a dog itself counts as a search and therefore requires probable cause to believe a crime has been committed.

The case involved Kevin McKnight, who in 2015 was pulled over in Craig, Colorado, by Cpl. Bryan Gonzales, ostensibly for failing to signal a turn. Gonzales had been following McKnight because of behavior he deemed suspicious: He saw McKnight's pickup truck parked the wrong way in an alley near an apartment complex as a man stood by the passenger door. Although Gonzales "saw no behavior consistent with an exchange or transaction," he followed the truck to "a residence where police had found drugs almost two months earlier, and it remained parked there for approximately fifteen minutes," during which time no one left the house or the truck. When Gonzales stopped McKnight, he "recognized the passenger as someone who had used methamphetamine 'at some point in the past,' but he wasn't sure how recently."

Gonzales called Sgt. Courtland Folks of the Moffat County Sheriff's Office, who arrived with Kilo, a dog trained to bark when he smells marijuana, methamphetamine, cocaine, heroin, or MDMA. Kilo barked at the driver's door, prompting a search that discovered a pipe with methamphetamine residue in a storage compartment under the rear seat. After McKnight was convicted of possessing methamphetamine and drug paraphernalia, he appealed, arguing that Kilo's barking could not justify a search and that police needed more evidence to use the dog in the first place. The Colorado Supreme Court agreed on both points, overturning his convictions.

The U.S. Supreme Court, whose Fourth Amendment reasoning the Colorado Supreme Court has largely followed in applying the state constitution's ban on "unreasonable searches and seizures," has long maintained that an olfactory sweep by a drug-detecting dog does not count as a search because it reveals only the presence of contraband, a fact that people have no legitimate privacy interest in concealing. The Court has also held that such a dog's alert by itself is enough to justify a vehicle search, which requires probable cause but not a warrant (under the "automobile exception" to the warrant requirement).

As the Colorado Supreme Court observed, neither of those assumptions holds true any longer in Colorado. "Marijuana is not only decriminalized in Colorado, it is legalized, regulated, and taxed," the court said. Furthermore, Colorado's legalization initiative amended the state constitution to say that possessing an ounce or less of marijuana in public is "not unlawful and shall not be an offense under Colorado law." Hence cannabis consumers "have a state constitutional right not guaranteed by the federal constitution."

Since Kilo's barking could have indicated nothing more than a legal quantity of marijuana, the court said, it did not provide probable cause for a search, even when combined with Cpl. Gonzales' vague suspicions (and leaving aside all of the other reasons to question the accuracy of a police dog's purported response to car odors). Since Kilo's sniffing can reveal information about legal (but potentially sensitive) conduct, the court added, it qualifies as a search in itself.

"Because persons twenty-one or older may lawfully possess marijuana in small amounts, a drug-detection dog that alerts to even the slightest amount of
marijuana can no longer be said to detect 'only' contraband," the majority said. "An exploratory sniff of a car from a dog trained to alert to a substance that may be lawfully possessed violates a person's reasonable expectation of privacy in lawfully possessing that item. Because there was no way to know whether Kilo was alerting to lawful marijuana or unlawful contraband, Kilo's sniff violated McKnight's reasonable expectation of privacy. Therefore, under state law, Kilo's sniff was a search that had to be constitutionally justified."

Since it wasn't, the court reasoned, the sniff was illegal under Colorado's constitution. So was the ensuing car search, meaning that the evidence it discovered should not have been admitted and McKnight should not have been convicted. "We are the first court to opine on whether the sniff of a dog trained to detect marijuana in addition to other substances is a search under a state constitution in a state that has legalized marijuana," the justices noted, but "we probably won't be the last."

If Colorado police officers continue to deploy marijuana-detecting dogs, they will not be very helpful as an end run around privacy protections, since cops will need probable cause to justify the use of a tool that is supposed to provide probable cause but no longer does (except in conjunction with other evidence). In theory, a dog can be trained to stop alerting to marijuana, but it is not easy or cheap, and to be reliable a retrained dog requires periodic testing to show it continues to ignore pot. Alternatively, pot-sniffing dogs can be replaced by newly trained animals that are not taught to detect marijuana. Lest you think that the need for such expenditures means marijuana legalization is costing taxpayers money, note that drug dogs cost up to $10,000 each, or roughly what the government spends on a couple of pot busts.