Cops who stop motorists to give them stuff are abusing their power. 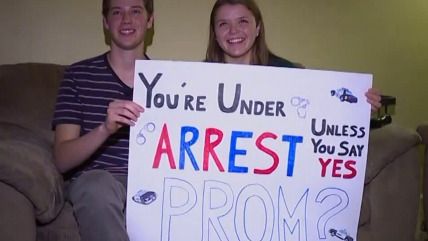 When Officer Cameron Burke pulled over Jenna Rodgers, a student at Warwick High School in Lititz, Pennsylvania, and told her she had exceeded the speed limit by 15 miles an hour, she was confused because she knew she hadn't. It turned out the traffic stop had been arranged by her boyfriend, Collin Kauffman, who approached her car holding a sign that said, "You're under arrest unless you say yes. Prom?"

Whether Kauffman's promposal strikes you as charming or alarming will depend on your attitude toward police and the restrictions imposed on them by the Constitution. Although everyone involved thought it was all in good fun, Burke violated the Fourth Amendment by stopping Rodgers for no legal reason, and there are similar problems with other feel-good stunts involving cops and motorists.

In a video posted last year by Halifax, Virginia, Police Chief Kevin Lands, a white cop walks up to a car he has just stopped and asks the driver, a black woman, "Are you aware of why I pulled you over today?" The puzzled driver replies, "No, sir."

The cop asks her if she is "familiar with Vehicle Code 1739." She is not, so he explains that "it's actually against the law to drive on a hot day without an ice cream cone." The driver laughs, out of either relief or amusement. "Oh, my God!" she says repeatedly.

Since viral videos of cops interacting with motorists usually involve abuses of power such as random searches, money grabs, bogus arrests, or the unjustified, occasionally fatal use of force, this episode may seem like a refreshing change. But it also involves an abuse of power, albeit one disguised by benign intentions.

WSET, the ABC station in Lynchburg, reported that Halifax police stopped about 20 drivers in one day "to hand out ice cream instead of tickets." It made no mention of any traffic violations that might have justified the stops. Neither did the local CBS station.

On Lands' Facebook page, where the video of the laughing motorist has been watched nearly 8 million times, he describes the drivers who got ice cream as "speeders," which suggests cops ended up ignoring traffic offenses that supposedly were serious enough to pull people over. In the video, there is no mention of any actual legal violation.

Cops have wide latitude to stop vehicles, but that latitude is not unlimited. Such stops are "seizures" under the Fourth Amendment, and they must be "reasonable," which usually means there is reasonable suspicion of a traffic offense.

A couple of years ago, the Macomb County, Michigan, sheriff's office pulled teenagers over and gave them gift cards as a reward for good driving. Those stops were clearly unconstitutional, since the teenagers were targeted for driving well—the opposite of a legal justification.

In a 2014 video, a police officer in Lowell, Massachusetts, who gives a driver Christmas presents for her kids says he pulled her over for illegally tinted windows. In another video from the same year, a Covington, Louisiana, police officer gives a woman a $100 bill stamped "Secret Santa" after pulling her over, supposedly because she failed to stop completely at an intersection.

The latter two examples would be deemed constitutional under the standard set by the Supreme Court, which says reasonable suspicion of a traffic violation makes a seizure legal even when it is not the real motivation for the stop. But these supposedly heartwarming interactions are still abuses of power.

If police would not have stopped drivers for these minor violations unless they had gifts to hand out, they are deliberately inconveniencing people and causing them needless anxiety for the sake of a publicity stunt. The distribution of gifts is beneficent on the face of it, but it is a demeaning kind of beneficence given the inherently unequal relationship between a citizen and an armed agent of the state with the power to forcibly detain him.