The attorney general's private assurances, like his public threats, are vague and noncommittal. 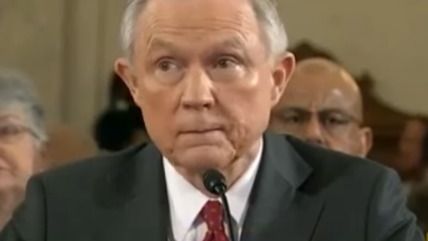 Yesterday 11 senators sent Attorney General Jeff Sessions a letter expressing concern about recent statements suggesting he plans to enforce the federal ban on marijuana against state-licensed businesses that serve recreational cannabis consumers. The senators, all of whom represent states that have legalized marijuana for medical or recreational use, urged Sessions to stick with the Obama administration's policy of leaving those businesses alone as long as their activities do not implicate the federal "enforcement priorities" listed in a 2013 memo from James Cole, then the deputy attorney general.

"On the campaign trail, then-candidate Trump stated that despite his personal views regarding marijuana use, legalization should be left to the states," note Sen. Elizabeth Warren (D-Mass.), Sen. Lisa Murkowski (R-Alaska), and nine of their colleagues. "It is essential that states that have implemented any type of practical, effective marijuana policy receive immediate assurance from the DOJ that it will respect the ability of states to enforce thoughtful, sensible drug policies in ways that do not threaten the public's health and safety….We believe that the Cole Memorandum provides a strong framework for effectively utilizing the DOJ's resources and balancing the law enforcement roles of the federal government and the states."

Two Republican senators, meanwhile, say Sessions gave them the impression that he would not try to shut down the cannabis industry in Colorado, Washington, Oregon, Alaska, or the four states where voters approved legalization last November. "He told me he would have some respect for states' rights on these things," Sen. Rand Paul (R-Ky.) told Politico, "so I'll be very unhappy if the federal government decides to go into Colorado and Washington and all of these places." Sen. Cory Gardner (R-Colo.) said he did not get the sense from administration officials that Sessions plans a big shift in policy. "Nothing at this point has changed," Gardner told Politico. On Meet the Press last Sunday, Colorado Gov. John Hickenlooper, a Democrat, said Sessions, prior to his confirmation, told Gardner marijuana enforcement "wasn't worth rising to the top and becoming a priority." According to a Justice Department spokesman contacted by Politico, "the department's current policy is reflected in the 2013 Cole memo."

These assurance are not exactly rock solid, especially since the Cole memo leaves a lot of leeway to crack down on state-legal marijuana suppliers, depending on how the federal enforcement priorities are interpreted. Yet both Politico and the New York Post make it seem as if opponents of marijuana prohibition overreacted to White House Press Secretary Sean Spicer's prediction of "greater enforcement" and Sessions' criticism of legalization, which he coupled with a pointed reminder that "it does remain a violation of federal law to distribute marijuana throughout any place in the United States, whether a state legalizes it or not."

The headline over the Politico story is "Sessions Reassures Senators: No Pot Crackdown Imminent," which overstates what they say he said. "Some respect for states' rights" does not rule out more enforcement, and neither does the impression that "nothing at this point has changed." Politico's subhead says "worries about a shift in federal enforcement in states that have legalized recreational use may be overblown." Then again, they may not. And here is reporter Burgess Everett's lead: "The Trump administration is causing serious paranoia among marijuana advocates with its hints of a federal crackdown on recreational use." That sentence is doubly dismissive, since paranoia implies that fears of a crackdown are irrational while alluding to one of marijuana's reputed effects. And why "marijuana advocates"? Were opponents of alcohol prohibition "booze boosters"?

The Post's headline, "Sessions Hints That Feds Won't Be Cracking Down on Pot Use," more accurately reflects what Paul and Gardner said (although the real issue is production and distribution, not use). But reporter Chris Perez's lead is hyperbolic and contemptuous: "Potheads living in states where marijuana is legal can stop freaking out—the federal government won't be cracking down on recreational use after all, a report says." That is not what the report says, potheads is even more derogatory than marijuana advocates, and "freaking out" is another oh-so-clever pot reference that trivializes the legitimate concerns raised by supporters of legalization. Calling people who think marijuana should be legal "potheads" is like calling people who think alcohol should be legal "drunks."

Everett and Perez eventually acknowledge that Sessions' enforcement plans raise important issues regarding the division of powers between the federal government and the states. Both reporters quote Paul and Sen. Catherine Cortez Masto (D-Nev.), who signed the letter to Sessions, demanding that conservatives who claim to support the 10th Amendment be consistent instead of making a marijuana exception to their federalism. "While the issue may seem centered solely around cannabis," Perez writes, "the senators said it's also one of states' rights." No kidding. Some of us also think this story has something to do with individual autonomy and economic freedom. Reporters who cover the subject need not agree, but they should at least stop giggling about those silly potheads.