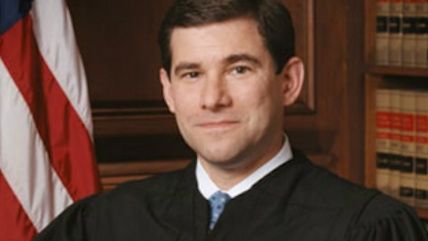 Yesterday President-elect Donald Trump said he plans to announce his Supreme Court pick sometime shortly after taking the oath of office. "I'll be making the decision on who we will put up … that will be probably within two weeks of the 20th," Trump said. The president-elect also reiterated his promise to choose his nominee from the "list of 20" prospective candidates that he released during the campaign. "We've met with numerous candidates. They're outstanding in every case," Trump said.

One name on that list in particular keeps cropping up: Judge William H. Pryor of the U.S. Court of Appeals for the 11th Circuit. Writing today at The Hill, for example, Alexander Bolton reports that "influential conservatives are pressing [Trump] to nominate Bill Pryor, a judge feared and disdained by liberals but loved by conservatives because of his 'titanium spine.'" Many conservatives seem especially enamored by the fact that Pryor once described Roe v. Wade as the "worst abomination in the history of constitutional law."

Pryor is also the subject of a lengthy profile published this week by SCOTUSblog's Kevin Russell and Charles Davis, who examined the judge's rulings in a variety of cases. Of particular note is their conclusion that Pryor "is no friend of criminal defendants. He very consistently sides with the government in criminal cases on issues both big and small."

I reached a similar conclusion when I profiled Pryor back in November, arguing that Pryor "has a troubling record of favoring broad judicial deference towards law enforcement."

Since Pryor is now rumored to be one of the favorites to replace the late Justice Antonin Scalia on the Supreme Court, it's worth comparing their respective records on criminal justice. Whereas Pryor has proven himself to be a dependable vote in favor of law enforcement, Scalia frequently ruled against the aggressive tactics employed by police and prosecutors. Indeed, Scalia himself liked to joke that he "ought to be the darling of the criminal defense bar" thanks to his opinions in favor of broad Fourth Amendment protections. "I have defended criminal defendants' rights—because they're there in the original Constitution—to a greater degree than most judges have," Scalia said.

Unfortunately, the same thing cannot be said for the pro-government jurisprudence of Judge William Pryor. If Donald Trump does end up nominating Pryor to replace Scalia on SCOTUS, the Senate Judiciary Committee should devote serious attention to this fundamental disagreement between the two conservative judges.