Lawmakers try to further restrict who can use the term 'milk.' 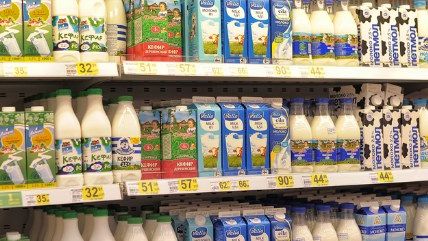 Last month more than 30 Members of Congress wrote a letter to the FDA asking the agency to require makers of non-dairy milks—including almond, rice, and soy—to stop using the term "milk" to describe their milk. The congressional letter is ridiculous, and reeks of a mix of unconstitutional protectionism and unconstitutional restrictions on free speech.

Rep. Peter Welch (D-Vermont), who's spearheading the misguided effort, says he's pushing the FDA to act in order "to protect Vermont's dairy farmers." Such action is neither part of the FDA's mission nor job. Neither is it within the agency's power.

Thankfully, others agree—and are pushing back.

"Terms such as 'soymilk' and 'almond milk' clearly and accurately describe these plant-based beverages," says Nicole Negowetti, policy director with the Good Food Institute, which works to promote and defend plant-based foods, in an email to me this week. "This letter from lawmakers is a thinly veiled attempt to appease the dairy industry, discount consumer choice, and undermine competition by restricting free speech."

The dairy industry has been making a living out of seeking government protection against its competitors since, perhaps, the dawn of time. And the federal government (along with state governments) has a long and sordid history of obliging the industry. Examples are this are so legion, and provide such foul evidence of ways the government wrongly protects one segment of the food industry, that I typically devote a whole week of the Food Law & Policy classes I teach to issues of dairy protectionism.

Dairy prices too low? No worries. The USDA will buy up your surplus cheese, or pay Domino's to develop a cheesier pizza. Don't like non-dairy coffee creamers competing with your cow-milk creamer? The state will force your competitor to call its products by a bizarre, made-up name—"melloream"—that no one would ever buy. Problem solved.

No lesser an authority than the U.S. Supreme Court has weighed in on government protection of dairy producers. In the late 1890s, the Court got it right, overturning a trio of mind-numbingly awful states' laws restricting the production and sale of margarine. In the 1930s, in a case many scholars argue forms much of the basis of modern law—take that for exactly what it's worth—the Court ruled Congress had the power to ban the sale of a dairy-milk substitute, Milnut.

More recently, powerful dairy groups like the National Milk Producers Federation have attempted to use their considerable clout, as I note in my book, Biting the Hands that Feed Us: How Fewer, Smarter Laws Would Make Our Food System More Sustainable, to compel the FDA "to bar foods such as almond milk, soy milk, and other plant-based drinks from using the term 'milk' to describe their non-dairy milk."

Enter Rep. Welch and his colleagues, to the rescue.

I have an alternate proposal: If the FDA is going to take a hard look at use of the term "milk," it should probably look past soy milk and almond milk and look instead at the carve-out that exists for the unmodified use of the term by dairy cow makers alone. "Milk" today means cow's milk and cow's milk alone. It shouldn't.

Americans are drinking many types of milk they've long consumed—cow, goat, camel, etc.—and newer types as well, including almond, coconut, hemp, rice, and soy. Rules that reserve use of the term "milk" for dairy-cow milk alone, at a time when Americans drink so many different types of milks, may be misleading. Perhaps rules should be established that force dairy-cow makers to modify their use of the term "milk" with the word "cow," in a way that would be consistent with every other use of the term ("goat milk," "almond milk," etc.).

Perhaps not, too. While I'm confident my argument in favor of such rules is stronger than that of those like Rep. Welch who have set their sights on soy milk, we don't need more dumb rules. We need fewer.

That said, from this day forward, without being compelled by government, I think I'll use the term "cow milk" in my own writings to refer to milk that comes from dairy cows so as to minimize confusion with goat milk, almond milk, and other milks. I encourage my fellow writers and consumers to do the same.

This week, the L.A. Times editorial board weighed in on a potential FDA crackdown, and came down clearly on the side of consumers and producers of non-dairy milks. "There are people who, for whatever reason, don't like the taste of cow's milk and are pleased to have alternatives available," the L.A. Times wrote.

"No reasonable consumer would confuse soymilk or almond milk with cow's milk," the Good Food Institute's Negowetti tells me. "In fact, demand for plant-based milks is on the rise precisely because consumers are seeking out dairy-free options."

She's right. Americans are consuming less cow milk, by their own volition, and more dairy alternatives. Is that a good thing? I don't have any opinion about that. People should eat and drink what they want—whether it's cow milk, almond milk, another milk, some combination, or no milk at all.

Government's proper role here is only to protect our right to make any and all such choices. Period. Consequently, the time is ripe to end all protections for dairy producers.