Why abolish it when you can ignore it? 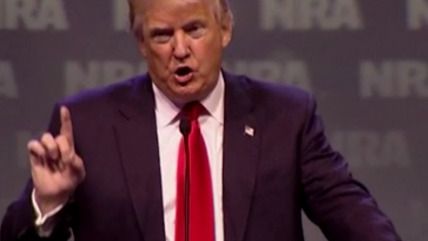 Accepting the National Rifle Association's endorsement last week, Donald Trump warned that Hillary Clinton "wants to abolish the Second Amendment." CNN corrected him, noting that Clinton "has never called for the abolition of the 2nd Amendment."

Although that's technically true, Clinton has done what amounts to the same thing. She has interpreted the Second Amendment so narrowly that it imposes no practical limits on gun control laws, and that interpretation is sure to guide her Supreme Court nominations if she is elected president.

On the same day that Trump addressed the NRA, one of Clinton's policy advisers told Bloomberg Politics the presumptive Democratic presidential nominee disagrees with District of Columbia v. Heller, the 2008 decision in which the Supreme Court overturned the District's handgun ban. The adviser, Maya Harris, said, "Clinton believes Heller was wrongly decided in that cities and states should have the power to craft commonsense laws to keep their residents safe."

Since Heller is the first case in which the Supreme Court explicitly recognized that the Second Amendment protects an individual right to armed self-defense, that statement is roughly equivalent to saying, "Trump believes Roe v. Wade was wrongly decided in that cities and states should have the power to craft commonsense laws to protect unborn children." Just as supporters of abortion rights would be justified in reading the latter statement as a rejection of their position, supporters of gun rights are justified in reading Clinton's statement as a rejection of theirs.

Clinton confirms her hostility to gun rights by glossing over the details of the D.C. law that the Supreme Court overturned. That law, which was the strictest of its kind in the country, not only banned handguns, the most popular type of weapon for self-defense, but required that long guns be disassembled and unloaded or disabled by a trigger lock.

As the Court recognized, the latter rule made it impossible for D.C. residents to use even shotguns or rifles "for the core lawful purpose of self-defense." But to Clinton, the D.C. ban was an eminently reasonable "safe storage law," a paradigmatic example of "commonsense" gun control.

"I know how important gun ownership, and particularly hunting, is here in northeastern Pennsylvania," Clinton told supporters in Dunmore last month. Regarding her gun control agenda, she said, "responsible gun owners have to stand up and say, 'This has nothing to do with my guns, my hunting, my sport shooting, my collecting.'"

Self-defense is conspicuously absent from Clinton's list of legitimate things people do with guns. The Australian government, whose mass confiscations of firearms Clinton admires, takes a similar view. Australians must demonstrate a "genuine reason" for owning a gun, and personal protection does not count.

But Australia has no Second Amendment. Clinton's campaign website mentions the Second Amendment a dozen times (compared to more than 800 mentions on Trump's site), not once in the context of self-defense.

Three of those references to the Second Amendment criticize people for taking it too seriously. After a mass shooting in Oregon last fall, for instance, Clinton rejected the NRA's "single-minded, absolutist theology about the Second Amendment being sacrosanct," saying "every constitutional right and amendment can be tailored in an appropriate way without breaching the Constitution."

Actually, it's government policy that has to be "tailored" so that it does not breach the Constitution. Restrictions on speech, for instance, must be "narrowly tailored" to serve a compelling government interest.