First Lawsuit of Its Kind Blames Marijuana for Murder

Kristine Kirk's family say her husband would not have killed her if he had been properly warned about THC side effects. 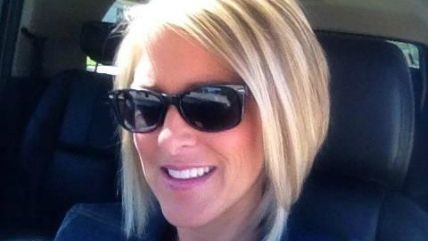 The family of a Denver woman whose husband killed her after eating marijuana-infused taffy has sued the manufacturer who made the candy and the retailer who sold it. The Denver Post says the case "appears to be the country's first wrongful-death lawsuit against the recreational marijuana industry," and it surely won't be the last. But any lawsuit that blames marijuana for murder faces steep obstacles because causation is virtually impossible to prove when a cannabis consumer does something that cannabis consumers almost never do.

Kristine Kirk, a 44-year-old mother of three, died on April 14, 2014, after her husband, Richard, shot her in the head. He had been behaving oddly, jumping in and out of windows and raving about the end of the world, after eating a few bites of Karma Kandy Orange Ginger taffy that he bought that evening at Nutritional Elements, a marijuana store on South Colorado Boulevard in Denver. The lawsuit, which was filed by Kristine's parents and sister on behalf of her three sons, argues that Nutritional Elements and Gaia's Garden, which made the candy, failed to adequately warn Richard about the hazards of consuming too much.

According to Richard Kirk's public defender (who has since been replaced by a private attorney), the clerk at Nutritional Elements, after learning that Kirk was an inexperienced user, did caution him against taking too large a dose, and Kirk ate more than recommended. It's not clear exactly how much. The entire taffy contained 100 milligrams of THC, which state regulators count as 10 doses. But Kirk did not eat the whole thing, and when his blood was tested after the murder the THC concentration was just 2.3 nanograms per milliliter, less than half the level that is presumed to impair drivers under state law (but which may not in fact indicate impairment, especially in regular users). Assuming Kirk was an infrequent cannabis consumer, it is still possible that he ingested enough THC to have an unpleasant experience. But bad trips rarely end in homicide.

The lawsuit nevertheless argues that Nutritional Elements and Gaia Gardens had a duty to warn Kirk that too much THC can trigger paranoia, hallucinations, and psychosis. It says the defendants "negligently, recklessly and purposefully concealed vital dosage and labeling information from their actual and prospective purchasers, including Kirk, in order to make a profit." At the time of Kirk's purchase, edible manufacturers were required either to list the THC content of each product on the package or indicate that the product had not been tested. New regulations approved after the murder mandate THC testing, impose a 100-milligram limit on the amount of THC in a single package, and require that each 10-milligram dose be wrapped separately or clearly marked.

The rules, which took effect in February 2015, do not mandate the sort of warnings about psychiatric side effects that Kristine Kirk's relatives say are necessary. But they do require a warning about the lag between ingesting an edible and feeling its effects: "The intoxicating effects of this product may be delayed by two or more hours." The lawsuit argues that Richard Kirk ate too much taffy because he did not realize how long the delay might be.

"While nothing can bring their parents back, this lawsuit will seek justice and change in an edible industry that is growing so fast it failed these young kids," said the family's attorneys. "Edibles themselves are not the evil. It is the failure to warn, the failure to properly dose, the failure to tell the consumer how to safely use edibles, that is the evil."

The challenge for the plaintiffs is connecting that alleged failure to Richard's decision to retrieve a pistol from his safe and shoot his wife, which requires showing that marijuana made him do it. As University of Denver law professor Sam Kamin noted in an interview with the Post, "We don't hold liquor stores responsible, and we don't hold vodka producers responsible, for drunk drivers." The challenge for Kristine's relatives is even harder, since alcohol demonstrably affects driving ability, but there is little scientific basis for the idea that marijuana causes murder.

"The plaintiffs will need to establish, among other things, causation—in other words, that the ingestion of defendants' edibles caused the incident and the proposed warnings would have made a difference," note Abby Sacunas and Leigh Ann Benson in an analysis on the website of Cozen O'Connor, a law firm specializing in product liability defense. "Causation in this type of case, like in food contamination cases, is likely to be an incredible hurdle given, for example, the variability of individual reactions and the inherent destruction of the product when ingested."

The lawsuit's claims resemble the criminal defense that Richard Kirk seems to be planning. Kirk, who was charged with first-degree murder, has pleaded not guilty by reason of insanity, and his lawyers appear to be laying the groundwork for claiming that marijuana triggered a temporary psychosis that rendered him incapable of forming the intent required for conviction. But that defense seems inconsistent with Colorado law, which says "the voluntary ingestion of alcohol or any other psychoactive substance" cannot be the basis of an insanity defense. The lawsuit likewise says Kirk, who is also named as a defendant, bears responsibility for putting himself in a position where he lost control of himself.

Police argue that Kirk knowingly and deliberately killed his wife, with whom he had been fighting bitterly for weeks. Kristine's relatives, by contrast, say he did not intend to kill her and had no way of knowing how he would react to the THC-treated taffy. They cannot blame Nutritional Elements and Gaia Gardens for her death without letting her husband off the hook.