The only solution is more housing. But people want the city the way it is: unaffordable. 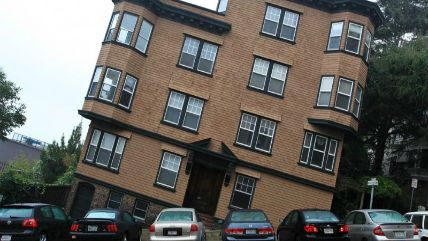 (Håkan Dahlström via Foter.com / CC BY)

Sonja Trauss runs the San Francisco Bay Area Renters Federation. The name was chosen to be redolent of Star Trek and also because its acronym would be BARF. The group's message board is said by The New York Times to "veer into strident libertarianism and juvenile ribbings." (I wonder what that's like?)

Trauss and her group sound like fine, well-meaning people. Their goal is to institute freer building policies that would allow more people to afford to live in San Francisco.

Naturally they are, as The New York Times reports in a very detailed look at BARF and the debate it is helping energize, running up against a lot of entrenched desire to futilely hold back the winds of eternal change. I wrote back in 2001 about San Francisco residents' eternal desire to keep the city the same city they first met and loved, at whatever cost to others.

BARF members are so single-minded about housing that they can be hard to label politically. They view San Francisco progressives as, in fact, fundamentally conservative. That is because, to the group members at least, progressive positions on housing seem less about building the city and more about keeping people like them out.

The city's denizens have a real problem with the "new tech money" they blame for insane housing and rental inflation. Trauss and BARF blame government for making it too hard to build, and a lefty coalition that thinks the only good new building is subsidized "affordable" housing.

David Campos of the Board of Supervisors says straight out that there is just too much demand from the well paid for supply to ever meet, and that none but the subsidizable with below median income for the city should ever even dream of living in San Francisco henceforth. As one of Trauss' associates complains, their enemies' "plans are only to allow current incumbent renters to stay in their place, presumably until they die and some rich person comes along."

Even within a larger progressive political community united on most question of value and party, the notion that the city could be made better (at least for people who might want to live there who aren't already settled in) by making it easier to build housing riles those dedicated to an environmentalist slow growth philosophy, and also dedicated to resenting tech workers.

A policy designed to make it harder for newcomers, and for oldtimers who can't afford rising rents and aren't under untouchable rent control, has become part of the definition of being a "progressive" there.

This thinking is at odds with a February report on housing prices from the California Legislative Analyst's Office, which said underdevelopment was the primary cause of the high prices that afflicted cities throughout the coastal part of the state, especially in the Bay Area.

"Many housing programs — vouchers, rent control and inclusionary housing — attempt to make housing more affordable without increasing the overall supply," the report said. "This approach does very little to address the underlying cause of California's high housing costs: a housing shortage."

A sideways detail in the story limns the infuriating range of things that can get one facing fine or imprisonment in this country: writing an inaccurate address on a voting registration form got a guy BARF tried to get on the Sierra Club's executive committee, Donald Dewsnup, arrested for voter fraud.

Conor Friedersdorf wrote intelligently late last year at The Atlantic about how it isn't so much evil rich techies causing a housing price explosion in that old city by the Bay, but:

property owners gleefully watching the value of their biggest assets skyrocket as they aggressively blocked high-density development. Their success has caused much misery.

He linked to an excellently detailed and non-ideological look at some of the grim realities of the politics of San Fran housing from Kim-Mae Cutler in Techcrunch in 2014, which sets forth exactly why a policy open in any way to new building or new residents or easing the insane price hikes don't work well in that town:

. San Francisco has a roughly thirty-five percent homeownership rate. Then 172,000 units of the city's 376,940 housing units are under rent control. (That's about 75 percent of the city's rental stock.)

Homeowners have a strong economic incentive to restrict supply because it supports price appreciation of their own homes. It's understandable. Many of them have put the bulk of their net worth into their homes and they don't want to lose that. So they engage in NIMBYism under the name of preservationism or environmentalism, even though denying in-fill development here creates pressures for sprawl elsewhere. They do this through hundreds of politically powerful neighborhood groups throughout San Francisco like the Telegraph Hill Dwellers.

Then the rent-controlled tenants care far more about eviction protections than increasing supply. That's because their most vulnerable constituents are paying rents that are so far below market-rate, that only an ungodly amount of construction could possibly help them. Plus, that construction wouldn't happen fast enough — especially for elderly tenants.

So we're looking at as much as 80 percent of the city that isn't naturally oriented to add to the housing stock…..

That's the environment that Trauss and her team are fighting in. As the story notes, most renters in San Francisco have a tenuous enough grasp on supply and demand basics to fear that more new building would just inevitably raise prices even more. More building freedom in San Francisco might be right, and might be better for more people, but it could still be a long time coming.