Dennis Hastert Notwithstanding, the Structuring Law Is Unjust

Even people who have committed no other crime can go to jail for trying to maintain their financial privacy. 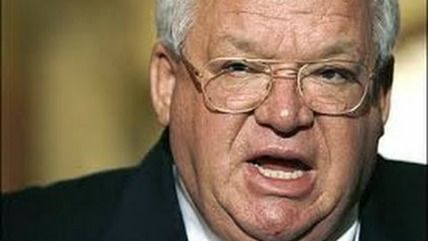 Federal prosecutors think former House Speaker Dennis Hastert should go to jail—ostensibly for trying to avoid federal financial surveillance but really because of the sexual abuse he allegedly inflicted on several members of the high school wrestling team he coached in Yorkville, Illinois, before getting into politics. Since the statute of limitations on those offenses has expired, the only feasible charge is "structuring," a crime that Hastert admits he committed by keeping his bank withdrawals below $10,000, the threshold for reporting transactions to the feds. He used the cash to pay off a victim of his abuse, identified in the government's sentencing memo as "Individual A."

According to the memo, Hastert massaged the uncovered groin of Individual A, then 14, during a wrestling trip. Although Hastert claimed to be helping the boy with a groin pull, "It became clear to Individual A that defendant was not touching him in a therapeutic manner to address a wrestling injury but was touching him in an inappropriate sexual way." Later Hastert, wearing only his underwear, asked Individual A to give him a back massage, which he did. Individual A confronted Hastert about the incident around 2010, demanding $3.5 million in compensation, which is how Hastert ended up withdrawing the large sums that attracted the attention of federal investigators.

Hastert told the FBI that Individual A was extorting money from him based on a false claim of abuse, and the government investigated that allegation by having Hastert record two conversations with Individual A during which they discussed the payments. Because Individual A did not make any threats during those conversations, the government rejected the extortion claim, a decision that looks legally dubious. As the memo emphasizes, Hastert was paying Individual A, who ultimately received $1.7 million of the promised $3.5 million, to keep their encounter a secret, fearing that other victims would come forward once Individual A made the incident public. Individual A's receipt of hush money certainly seems to meet the terms of the federal blackmail statute. Although it is understandable that federal investigators decided not to pursue that charge once they became convinced that Individual A's claim of abuse was true, it is disingenuous to pretend Hastert was not blackmailed.

If Hastert's secret had been his sexual orientation rather than his grave misconduct as a high school wrestling coach, the person demanding payoffs probably would have been charged with a crime, and the government probably would not be trying to lock Hastert up. "With this case," the memo says, "the government seeks to hold defendant accountable for the crimes he committed that can still be prosecuted: defendant's structuring of cash withdrawals and his lies to the government about that activity. But those crimes, while recent, have their origin in the defendant's past. The actions at the core of this case took place not on the defendant's national public stage but in his private one-on-one encounters in an empty locker room and a motel room with minors that violated the special trust between those young boys and their coach."

The government argues that "all aspects of defendant's conduct relating to the structuring activity, of which the sexual abuse is a core component," should be considered in imposing a sentence. But federal sentencing guidelines recommend a prison term no longer than six months for Hastert, which is considerably lighter than the penalty he could have faced if he had been convicted of sexually abusing Individual A and other members of the wrestling team.

Although Hastert got off lightly in that sense, the crime for which he is officially being punished should not be a crime at all. Again, imagine that someone was threatening to reveal not that Hastert had sexually abused high school students but simply that he was gay. He might then have engaged in exactly the same conduct—big withdrawals, then smaller ones after bank employees started asking about them—that prompted the structuring charge in this case. Likewise if he had withdrawn money for other sensitive or embarrassing but entirely legal reasons: The pattern of withdrawals would still count as a crime under federal law, as the pamphlets that Hastert's bank gave him explained.

When bank employees, who are required by federal law to keep an eye out for "suspicious activity," started asking Hastert why he was withdrawing so much cash, his initial reaction was that it was none of their business. Although it is hard to sympathize with that reaction in this context, such an attitude is perfectly understandable and justified in the case of innocent, law-abiding people who resent having the government look over their shoulders, checking to see if their transactions are suspiciously large or suspiciously small. When people are suspected of trying to maintain their privacy by staying below the $10,000 reporting threshold, the government can confiscate their life savings or send them to prison, even if they have committed no other crime. These injustices should not be obscured by the fact that the structuring law gave the feds a charge to pin on Dennis Hastert.