A long overlooked provision of the Controlled Substances Act makes it a felony to "place" a marijuana ad. 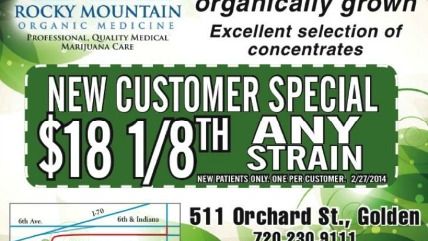 Last week eight members of Congress asked Attorney General Loretta Lynch to reassure newspaper publishers that they won't go to prison for accepting ads from marijuana merchants. While that prospect seems remote at this point, it highlights the uncertainty caused by continued federal prohibition of marijuana, which applies even in the 23 states that have legalized the drug for medical or recreational use.

While those states treat cannabis suppliers as legitimate businesses, the federal government still sees them as criminal enterprises, committing multiple felonies every day. Anyone who does business with them is implicated in those felonies, which is why banks are so reluctant to accept marijuana money. Providing services to cannabusinesses could be viewed as aiding and abetting federal drug crimes, while accepting payment for those services could be viewed as money laundering. For newspapers and magazines, there is an additional concern: The Controlled Substances Act (CSA) makes it a felony, punishable by up to four years in prison, to "place in any newspaper, magazine, handbill, or other publications, any written advertisement knowing that it has the purpose of seeking or offering illegally to receive, buy, or distribute a Schedule?I controlled substance."

That provision has been part of the CSA since 1994, two years before California became the first state to legalize medical marijuana. But publishers of newspapers and magazines that run ads for state-legal marijuana businesses gave little thought to its potential implications for them until last November, when U.S. Postal Service (USPS) officials in Portland, Oregon, announced that periodicals containing marijuana ads are "nonmailable," citing the CSA and USPS regulations. That came as a surprise to Oregon newspaper publishers, many of whom depend on the mail to deliver part of their print runs and some of whom sell space to cannabusinesses.

A few weeks later, responding to an inquiry from members of Oregon's congressional delegation, Thomas Marshall, the postal service's executive vice president and general counsel, noted that the CSA bans marijuana and marijuana ads. "These provisions express Congress's judgment that the mail should not be used as a means of transmitting advertisements for the sale of marijuana, even if that sale is allowed under state law," Marshall wrote in a December 15 letter. But he also noted that local postmasters have no authority to reject mail for this reason.

"Per USPS policy based on the existing federal statute, local postal officials have been advised not to decide whether written, printed or graphic matter is—solely because of its content—non-mailable," a USPS spokesman told The Denver Post. Marshall said postmasters who come across marijuana ads can contact the U.S. Postal Inspection Service, and "the matter would then be turned over to the responsible law enforcement agencies for investigation if appropriate."

In other words, periodicals containing marijuana ads may be "nonmailable," but that does not mean you can't mail them. Still, the allusion to the possibility of criminal investigation was rather alarming. It prompted the letter that eight House members, seven of whom represent jurisdictions where marijuana is legal for medical or recreational use, sent Attorney General Lynch last Tuesday.

Rep. Earl Blumenauer (D-Ore.) and his colleagues wonder how the Justice Department (which includes the Drug Enforcement Administration) might respond to reports about marijuana ads that postmasters happen to come across. They note that the department's current policy is to leave state-licensed cannabusinesses alone unless their activities implicate "federal law enforcement priorities." Furthermore, a spending rider that was renewed last December bars the Justice Department from interfering with the implementation of medical marijuana laws. In light of those policies, the legislators argue, the feds should take no official interest in ads for state-legal marijuana merchants.

"The USPS has made clear their position," Blumenauer et al. write, "but this still leaves uncertainty for businesses, including newspapers, as to how DOJ will react to any information provided by USPS about marijuana advertisements. Clarity for businesses is essential as they work to comply with state law, and as states seek to implement their marijuana laws safely and effectively."

Clarity would be nice, but we are unlikely to have it anytime soon. It is not even clear whether a publication that accepts a marijuana ad is guilty of "placing" it, which is the action that the CSA proscribes. In 2011 Laura Duffy, the U.S. attorney in San Diego, talked about cracking down on newspapers and magazines that run ads for medical marijuana dispensaries. She also mentioned TV and radio ads, which are arguably covered by another CSA provision that makes it a felony to "use any communication facility in committing or in causing or facilitating" a drug offense.

"If I own a newspaper…or I own a TV station, and I'm going to take in your money to place these ads, I'm the person who is placing these ads," Duffy told California Watch. "I am willing to read [the law] expansively, and if a court wants to more narrowly define it, that would be up to the court." But it seems nothing came of Duffy's threats, and as far as I can tell her interpretation of the ad ban has never been tested in court.

Alex Kreit, a drug policy expert at Thomas Jefferson School of Law in San Diego, and Seattle attorney Hilary Bricken, who specializes in marijuana law, say they are not aware of any such cases. "Based on the text, it strikes me as a close issue," Kreit says. "One could argue the best interpretation is that 'place' means only the advertiser. The advertiser places the ad, and the publisher runs it. On the other hand, placing might also be interpreted to include the act of incorporating the advertisement into the publication, which would cover the publisher. Also, the language 'knowing that it has the purpose' arguably suggests a legislative intent to cover publishers, since this might refer to publishers who know the purpose of the advertiser."

The Justice Department's attitude toward marijuana ads is also unclear. According to a 2013 memo to U.S. attorneys, the department's enforcement priorities include preventing interstate smuggling, sales to minors, and "adverse public health consequences," which presumably include harms associated with excessive consumption by adults. "I could certainly imagine the DOJ taking the position that advertising might lead to 'over-commercialization,'" Kreit says, "and so treating it differently from manufacture and sales as far as prosecutorial guidance."

By this point you may be wondering: Isn't advertising a kind of speech, and isn't speech protected by the First Amendment? Although dictating the content of periodicals certainly seems inconsistent with the First Amendment's command that "Congress shall make no law…abridging the freedom of speech, or of the press," the Supreme Court has said the Constitution allows the government to ban speech that facilitates lawbreaking. "We have no doubt that a newspaper constitutionally could be forbidden to publish a want ad proposing a sale of narcotics or soliciting prostitutes," the Court said in 1973. Seven years later, in a landmark commercial speech case, it reiterated that point, saying the First Amendment does not protect "commercial speech related to illegal activity."

In a nod toward the First Amendment's constraints, the CSA's ad ban "does not include material which merely advocates the use of [illegal drugs], which advocates a position or practice, and does not attempt to propose or facilitate an actual transaction in a Schedule I controlled substance." That means a magazine like High Times is perfectly legal—except, perhaps, when it runs ads sponsored by marijuana businesses in Colorado, as it did in its 40th anniversary issue a couple of years ago. But publications that regularly run marijuana ads, such as Westword in Denver or The Stranger in Seattle, are regularly committing felonies, assuming that Laura Duffy's reading of the CSA is correct.

Yet another CSA provision, added in 2008, addresses online ads for illegal drugs: "It shall be unlawful for any person to knowingly or intentionally use the Internet, or cause the Internet to be used, to advertise the sale of, or to offer to sell, distribute, or dispense, a controlled substance where such sale, distribution, or dispensing is not authorized by this subchapter." On the face of it, that covers marijuana merchant directories like Leafly and Weedmaps, to the extent that they feature sponsored content.

Even if Lynch clarifies the Justice Department's attitude toward marijuana ads, that policy could be changed at any time, by this administration or the next. A bill that Sen. Ron Wyden (D-Ore.) introduced last month would guard against that possibility by making an exception to the CSA's ban on marijuana ads for businesses that comply with state law. Rep. Dana Rohrabacher (R-Calif.), who signed the letter to Lynch, has proposed a broader bill that says the CSA's marijuana provisions "shall not apply to any person acting in compliance with State laws." That one sentence would let merchants advertise what legislatures legalize and cure many other headaches caused by the federal government's resistance to making peace with a plant that most Americans have learned to tolerate.