Where other conservatives see cannabis chaos, Mike Ritze sees a victory for federalism. 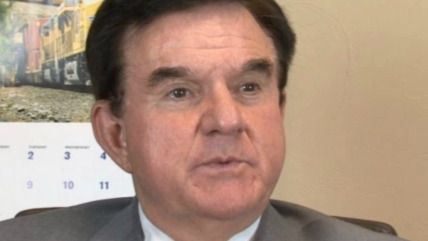 In a Tulsa World op-ed piece published yesterday, Oklahoma legislator Mike Ritze, a conservative Republican, celebrates the Supreme Court's refusal to hear his state's lawsuit challenging marijuana legalization in neighboring Colorado. Ritze, who represents Broken Arrow in Oklahoma's House, was one of seven state legislators who complained about the lawsuit in a December 2014 letter to Attorney General Scott Pruitt. Ritze says he "firmly" opposes marijuana legalization. But unlike Pruitt, an avowed federalist, Ritze takes the 10th Amendment and the doctrine of enumerated powers seriously:

The lawsuit essentially claimed that because a federal statute and a few U.N. treaties ban marijuana, Colorado has no choice but to not only accept prohibition, but to help enforce it.

First of all, the U.S. Constitution does not delegate any power to the federal government in this area. That is why alcohol prohibition in 1920 necessitated a properly ratified constitutional amendment to be adopted at the federal level.

If the U.S. Constitution does not delegate any powers to the feds in the area of marijuana prohibition, and it doesn't, Washington, D.C., has no business ratifying international treaties or passing federal statutes acting as if it possessed those powers.

The U.S. Constitution only says statutes and treaties created in pursuance with the Constitution are the supreme law of the land. Any power grabs undertaken in defiance of that Constitution are mere usurpations that states have a duty to nullify….

Although Pruitt did not claim that the Supremacy Clause requires Colorado to recriminalize the cultivation, possession, and sale of marijuana, he argued that the state's licensing and regulation of commercial production and distribution conflicts with the Controlled Substances Act and harms Oklahoma because some Colorado cannabis ends up there. If he had gotten his way, the result could have been a free, unregulated market in marijuana, which libertarians might celebrate but pot prohibitionists like Pruitt presumably would not. Still, Ritze is right that Pruitt wanted the Supreme Court to override Colorado's laws because he thought they made it harder for Oklahoma and the federal government to enforce their bans on marijuana.

Note that Ritze does not merely object that such an imposition would violate the state autonomy recognized by the 10th Amendment. He also argues (correctly) that the Constitution does not authorize Congress to ban marijuana to begin with, just as it did not authorize Congress to ban alcohol until the ratification of the 18th Amendment in 1919. In his 2014 letter to Pruitt, Ritze noted that the Controlled Substances Act rests on a reading of the power to regulate interstate commerce that the Supreme Court developed in the late 1930s and early '40s—a reading so broad that it allows Congress to do pretty much anything it wants, as long as it is not explicitly forbidden by the Constitution. Fair-weather federalists like Pruitt reject that understanding of the Commerce Clause in the context of Obamacare and other policies they do not like but embrace it when it's convenient.