Don't Punish All Drug Offenders for the Crimes of One 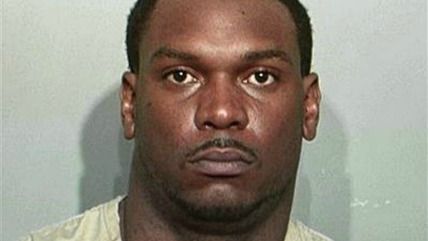 Last month Wendell Callahan was charged with using a knife to murder his ex-girlfriend and her two young daughters at their apartment in Columbus, Ohio. Opponents of sentencing reform have latched onto this horrifying crime as an example of what we can expect if Congress approves a bill that would allow the early release of federal prisoners serving time for drug offenses. But the case does not prove what critics of that bill think it does.

In 2007 Callahan received a sentence of 150 months (more than 12 years) for selling crack. As a result of retroactive changes to federal sentencing guidelines, that prison term was reduced to 100 months (more than eight years). Callahan, who also got some time off for good behavior in prison, was released on August 8, 2014, a year and a half before the murders. If Callahan's sentence hadn't been shortened, The Columbus Dispatch reported, "he likely would have been in prison at least until late this year."

Last week four senators—Jeff Sessions (R-Ala.), Tom Cotton (R-Ark.), David Vitter (R-La.), and David Perdue (R-Ga.)—cited Callahan's case in a letter urging their colleagues to oppose the Sentencing Reform and Corrections Act. The U.S. Sentencing Commission estimates that the bill, which passed the Senate Judiciary Committee by a bipartisan 3-to-1 vote in October, would allow 8,100 or so current prisoners to seek early release. "We believe that the possible release of thousands of violent criminals is a risky and possibly devastating social experiment in criminal leniency," Sessions et al. write. "If this grand experiment goes awry, how many lives will be ruined? How many lives will be lost? How many families will be torn apart?"

Contrary to what Sessions, Cotton, Vitter, and Perdue imply, Callahan is hardly typical of the drug offenders who would benefit from the Sentencing Reform and Corrections Act. Callahan was convicted of using a firearm in connection with drug trafficking, had a prior conviction for a nonfatal shooting, and in 2006 was arrested for beating and choking his girlfriend. According to a 2015 report from the Bureau of Justice Statistics (BJS), the vast majority of federal drug offenders are not convicted of using guns. A recent analysis by the Charles Colson Task Force on Federal Corrections found that "over three-quarters of all individuals in federal prison for drug offenses have no serious history of violence before the current offense." Most "have no violent history, and nearly a quarter have minor histories of violence, such as simple assault and other crimes that do not typically lead to serious injury."

Judges are supposed to consider a prisoner's violent tendencies when deciding whether to shorten his sentence, but in Callahan's case the judge apparently gave more weight to his behavior behind bars. The Dispatch says "federal prosecutors agreed that Callahan's good behavior in prison and other factors" indicated that "his early release did not present a danger to the safety of the public." In retrospect, that judgment was clearly mistaken. But why should nonviolent drug offenders be punished for Callahan's crimes?

To strengthen their insinuation that the Sentencing Reform and Corrections Act would free 8,000 Wendell Callahans to commit murder and mayhem, Sessions et al. cite a 2014 BJS report on people released from state prisons between 2005 and 2010. BJS found that 77% of drug offenders were arrested again within five years of completing their sentences—the same as the rate for all state prisoners. But only 25% of drug offenders were arrested for violent crimes—lower than the rates for people who had been convicted of violent, property, or "public order" offenses. More than 80% of the new arrests for violent crimes involved assault charges, while less than 1% involved homicide.

The BJS report confirms what the data on federal prisoners indicate: Drug offenders are generally not violent, let alone murderers. Yet after citing the BJS numbers, Sessions et al. say "the heinous murders of Erveena Hammonds and her two little girls, Breya and Anaesia, the victims in the triple homicide by Wendell Callahan, is [sic] a harsh reminder of these facts." Apparently the senators think all drug offenders should be kept behind bars, even if they have no history of violence and are serving sentences that Congress deems too harsh, because some of them are violent.

How do Sessions, Cotton, Vitter, and Perdue arrive at that conclusion? By denying that there is any such thing as a nonviolent drug offender. "We want to make clear to you, our colleague, that drug trafficking can in no way be considered a 'non-violent' crime," they write. "It is an industry built on an entire edifice of violence, stretching from the narco-terrorist organizations in South America to the drug deal enforcers that afflict too many U.S. communities."

There is no question that black-market disputes are often resolved by violence, since the prohibition policy that Sessions et al. support leaves few peaceful alternatives. But that does not mean every drug offender is implicated in violence. Under federal law, people guilty of nothing but engaging in peaceful, consensual activities (such as growing marijuana, mailing LSD, or selling cocaine) can and do receive sentences as long as life. Yet Sessions and his colleagues casually refer to drug offenses and "other types of violent crimes," arbitrarily redefining nonviolence as violence.

Sessions et al.'s obfuscation of this point is reminiscent of comments that Senate Judiciary Committee Chairman Chuck Grassley (R-Iowa) made last February. Criticizing an earlier bill, the Smarter Sentencing Act, as "lenient" and "dangerous," Grassley said it's simply not true that "federal mandatory minimum sentences are putting large numbers of nonviolent offenders in jail for long periods of time at great taxpayer expense."

How did Grassley know that? Because cases in which drug offenders receive mandatory minimums generally involve substantial amounts of drugs and manufacture, smuggling, or distribution, as opposed to possession of small amounts for personal use. But these are distinct issues. You can sell 28 grams (about an ounce) of crack, grow 100 marijuana plants, or distribute a gram of LSD without assaulting anyone. Yet those actions will still get you a five-year mandatory minimum for the first offense and 10 years for subsequent offenses. A low-level courier who transports 280 grams of crack, five kilograms of cocaine powder, or a kilogram of heroin gets 10 years for a first offense.

According to the sentencing commission's numbers, crack retroactivity accounts for 72% of the early releases Grassley's bill would authorize (subject to a judge's approval). The rest come from a provision that would reduce from 15 to 10 years the mandatory minimum for possessing a firearm after three convictions for a "violent felony or a serious drug offense." Someone who has never committed a violent crime can receive that penalty simply by owning a gun, a.k.a. exercising his Second Amendment rights.

Since crack retroactivity is the main source of shorter sentences for current prisoners under Grassley's bill, it is puzzling that Perdue, a cosponsor of the Smarter Sentencing Act, opposes the Sentencing Reform and Corrections Act because of the early releases it would allow. Sen. Ted Cruz (R-Texas) did a similar flip-flop last year, complaining about retroactivity in Grassley's bill after backing it in the Smarter Sentencing Act. Cruz has retreated from his support for sentencing reform while seeking the Republican presidential nomination. Perdue does not face re-election until 2020, so his motivation is less clear.

Whatever political games erstwhile reformers may play, the fact remains that federal drug sentences are arbitrary and excessive, especially when compared to the penalties people commonly receive for violent crimes. Once Congress recognizes that sentences are unjust, forcing current prisoners to complete them is neither fair nor reasonable. By urging legislators to treat every drug offender as a potential murderer, opponents of sentencing reform are asking them to sacrifice justice on the altar of fear.