The 10 Worst Lines in the State of the Union

Listen to me, Katherine Mangu-Ward, and Rep. Thomas Massie explain why on SiriusXM Channel 121 at noon ET 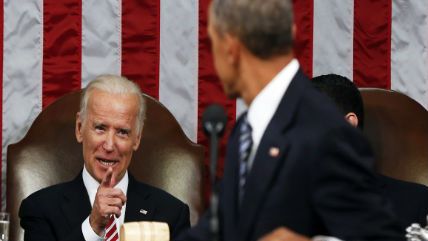 I am hosting the Insight Hour on SiriusXM Insight (Channel 121) all week at noon. Monday I interviewed Rand Paul and Matt Kibbe; Tuesday it was Kmele Foster and Kevin Williamson, and today I'll be talking with none other than beloved Reason Managing Editor Katherine Mangu-Ward and the heavily libertarian Rep. Thomas Massie (R-Ky.). Mangu will talk about why you shouldn't vote, Massie will discuss criminal justice reform efforts on Capitol Hill, and the backdrop all hour will be President Barack Obama's exhausted State of the Union address.

To get that conversation started—and you should damn well join that conversation, by calling 877-974-7487 during the show—here's my preliminary list of the 10 worst lines from last night's speech; please nominate others in the comments:

10) If we want a better politics, it's not enough just to change a congressman or change a senator or even change a president. We have to change the system to reflect our better selves.

9) I have no doubt a president with the gifts of Lincoln or Roosevelt might have better bridged the divide, and I guarantee I'll keep trying to be better so long as I hold this office.

8) This year, I plan to lift up the many businesses who've figured out that doing right by their workers or their customers or their communities ends up being good for their shareholders…and I want to spread those best practices across America. That's part of a brighter future. In fact, it turns out many of our best corporate citizens are also our most creative.

7) The world will look to us to help solve these problems, and our answer needs to be more than tough talk or calls to carpet-bomb civilians. That may work as a TV sound bite, but it doesn't pass muster on the world stage.

5) If you doubt America's commitment—or mine—to see that justice is done, just ask Osama bin Laden. Ask—ask the leader of Al Qaida in Yemen, who was taken out last year, or the perpetrator of the Benghazi attacks, who sits in a prison cell. When you come after Americans, we go after you. And it may take time, but we have long memories, and our reach has no limits.

4) I believe in change because I believe in you, the American people. And that's why I stand here, as confident as I have ever been, that the state of our Union is strong.

3) That's how—that's how we—that's how we delivered more care and benefits to our troops coming home and our veterans.

2) Anyone claiming that America's economy is in decline is peddling fiction.

1) You know, last year, Vice President Biden said that, with a new moon-shot, America can cure cancer. Last month, he worked with this Congress to give scientists at the National Institutes of Health the strongest resources that they've had in over a decade. Well, so—so tonight, I'm announcing a new national effort to get it done. And because he's gone to the mat for all of us on so many issues over the past 40 years, I'm putting Joe in charge of mission control.

My video take from last night: