The former two-term governor of New Mexico was the Libertarian Party candidate in 2012. 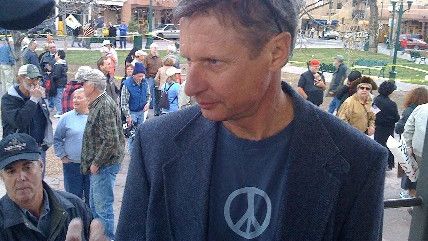 Gary Johnson is a self-made millionaire, a former two-term Republican governor of a largely Democratic state, and a former presidential candidate. Last night, Johnson hinted on Twitter that he will make an announcement regarding his 2016 ambitions during an appearance on Fox Business Network's Cavuto Coast to Coast today:

Tune in tomorrow. I'll be on @FoxBusiness with @TeamCavuto, and may have some news to share re the #2016presidentialelections. #libertarian

Johnson has indicated on a number of occasions, including in a November 2015 interview with Reason and on his own Tumblr account, that he will run for president in 2016.

(UPDATE: Johnson made it official this morning during his interview on the Fox Business Network, where he denied he would be siphoning votes only from the Republican candidate, saying, "When it comes to Libertarians, Libertarians draw as many votes from Democrats as they do Republicans and like I said, I do believe crony capitalism is alive and well.")

After being asked when he intended to announce his candidacy, Johnson said he felt no sense of urgency to jump into a crowded field, and that he intended to fight the marginalization of legitimate third-party candidates:

There's no advantage to making it official given what I'll call the clown-car. Given the attention that's being given to the Republican side. Let that stuff sort it self out and there's plenty of time for the general election. I thought we'd have done a lot better last election cycle, so I'm not under any delusions. We are suing the Presidential Debates Commission. Eighty percent of Americans say they want another choice and they have no idea why there isn't another choice. We think at the heart of that is the Commission and we're suing them on antitrust grounds, on the basis of the Sherman Act, that they collude with the two major parties, that they are a business, and we think the media has also signed similar documents when it comes to televising the debates.

Earlier this week, Johnson announced his resignation as Director and CEO of Cannabis Sativa, Inc, a company whose goal is to "to brand and market the highest quality, legal cannabis products available today – and to innovate the industry-leading products of tomorrow." The Johnson-penned mission statement also says the company believes "cannabis is destined to become the next gold rush and we're prepared to shape its future in a legal environment."

Johnson's departure from Cannabis Sativa, Inc (where he will be replaced by his previous Libertarian Party running mate, Judge Jim Gray) was interpreted as a tell-tale sign that the former governor was about to make his candidacy official.

A prominent former Republican critic of the War on Drugs far before it was fashionable, Johnson wrote on his Tumblr:

I created quite a stir nationally by proposing, in 1999, that marijuana be legalized. I was the highest ranking official in the nation to do so, and at the time – as opposed to now, it was not a popular idea. Everyone recognized, beginning with me, that it would be political suicide. But I didn't have any further political ambitions, and more importantly, it was the right thing to do.

Enforcing and prosecuting laws against simple marijuana possession were clogging up our courts, overcrowding our jails, costing taxpayers millions of dollars and doing permanent harm to thousands of young lives. All that because we had criminalized a nonviolent behavior that an estimated 140 million  Americans have engaged in at some point in their lives. It didn't make   sense, and I said so. It wasn't about marijuana being good or bad for an individual. It was about a modern-day Prohibition that was not only not working, but doing far more harm than good, at tremendous human and financial cost.

UPDATE: Johnson made it official this morning during his interview on the Fox Business Network, where he denied he would be siphoning votes only from the Republican candidate:

"When it comes to Libertarians, Libertarians draw as many votes from Democrats as they do Republicans and like I said, I do believe crony capitalism is alive and well," Johnson said. "It's Democrats and Republicans who contribute to that."

You can read past Reason coverage on Gary Johnson here, watch his visit with Reason TV to Occupy Wall Street in 2011 here, and check out his interview with Nick Gillespie from this past summer below: