The senator begins his annual Airing of Grievances by dropping #sickburns on his rivals. 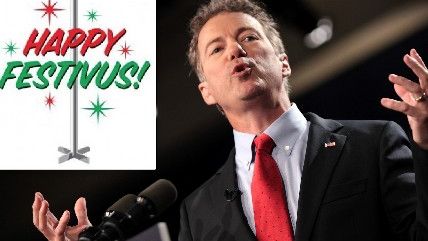 Sen. Rand Paul (R-Ky) may soon find himself relegated to the kid's table at the next

Republican Presidential Debate, but that doesn't mean he still doesn't have a lot of problems with you people!

For the 3rd consecutive year, Paul commemorates the Seinfeld-ian holiday known as Festivus with a ceremonial airing of grievances over Twitter. In previous years, Paul would take out his frustrations on overreaching protectionist government regulations, but this year he led off by taking aim at his fellow presidential hopefuls.

Paul led off by schooling Donald Trump, fresh off of SchlongGate, on his clumsy deployment of faux-Yiddish:

Where to start but @realDonaldTrump. If u bring the Yiddish, know what it means. Guess that's more of a kvetch than a grievance #Festivus

A decent joke as well as a sick burn, considering this whole exercise is inspired by a show that frequently employed Yiddish colloquialisms which the billionaire from Queens should be better versed with than the eye doctor from Kentucky. Unfortunately, Paul quickly went full "Jerk Store" with this tortured reference to Trump's discontinued Macy's clothing line:

After the debates, @realDonaldTrump always trying to give us parting gifts of his made in China ties. Weird. #Festivus

The quality of the rest of the insult-grievances reside somewhere between those two. Paul's dig on Ted Cruz's Canadian birth and early childhood pokes fun at his own nativism as well as the Birther-wing of the Republican Party.

My friend @tedcruz has still not pledged to issue exec order declaring Canadian "bacon" is not real bacon. Makes me suspicious. #Festivus

Another halfway decent tweet, which all right-thinking Americans can get behind, tweaks Governor Chris (Rah-Rah New Jersey) Christie's bizarre lifelong devotion to the Dallas Cowboys:

I think I speak for all in NJ when I say @GovChristie I don't care how much $ u spend at Met Life, Cowboys fans should stay out. #Festivus

It's always the season to mock failed economic philosophies:

to my comrade @SenSanders: Unless you're Santa Claus, Socialism runs out of other people's money #Festivus

to my absentee friend @marcorubio, I didn't put your $170k+ salary in my waste report today. But I could have #Festivus

And a bit of a human moment, to mourn the loss of Lindsay Graham, who recently exited the GOP Presidential clowncar:

I hereby retract grievance I was going to air about @GrahamBlog today. Respect for the recently departed #EarlyFestivusPresent #Festivus

Things took a turn for the lame with a truly unfunny and sexist knock on Hillary Clinton's bathroom break during last Saturday's debate, inexplicably tying Carly Fiorina into the action (which Fiorina demonstrated her apparent approval of with a retweet):

There were a couple of throwaway knocks on the well-noted low energy styles of two candidates. In the case of Jeb Bush:

.@JebBush is always trying to change the debate rules to allow extra time for awkward pauses in answers. Not gonna happen. #Festivus

And for Ben Carson:

I have no grievances against my fellow doc @RealBenCarson because I have not heard a word he has said in any debate. #Festivus

Paul has since dispensed with the Don Rickles impression and is now directing attention to airing grievances over specifically absurd examples of government waste (Testing golf clubs in space! Rich people in public housing! A televised cricket league in Afghanistan!) while promoting his annual "Waste Report" and, of course, passing around the tip jar to help keep his waning presidential campaign alive.